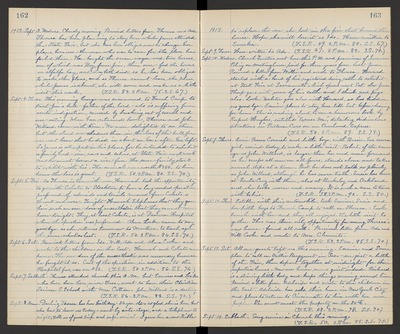 1913. Sept. 3. Wednes. Cloudy morning. Received letters from Theresa and Ada. Theresa has been planning to stay here while James attended the State Fair, but she has been obliged now to change her plans, because the man who was to can for the place has failed them. He bought the cream wagon and two horses, one of which was Boy, from Jim, then over-fed the horses, on alfalfa hay, and they both died, so he has been obliged to make other plans, and as Theresa cannot leave the place while James is absent, she will come and make as a little visit this week. (T.S.R. 52. 2 P.M. 75. S.S. 67.)

Sept. 4. Thurs. This morning George was summoned to French Camp to treat Jim's bull - father of the herd - who is suffering from acute indigestion, caused by breaking out of corral and over-eating. When Geo. returned home. Theresa and John Willard came with Him. We were delighted to see them but the closed over shadows them in the loss of the bull, for we now hear that he died in about an hour after Geo. left. So James is all upset in his plans, for he intended to exhibit a family herd - sire, cows and calves, at State Fair next week now he must borrow a sire from the same family stock, to exhibit with his. The animal was worth $350. to him hence the loss is great. (T.S.R. 50. 2 P.M. 80. S.S. 70.)

Sept. 5. Fri. As Theresa is here with me, Hannah took the opportunity to go with Celeste to Stockton to have a long needed operation performed, of adenoids and tonsils removed from Celeste's throat and nose. Tonight Hannah telephones that they gave him such an over-dose of anesthetic that they cannot come home tonight. They, at least Celeste, is at Dameron Hospital where the operation was performed. Alma Locke came to say goodbye, as she returns tomorrow to Mantera, to teach again the same school as last. (T.S.R. 50. 2 P.M. 84. S.S. 70.)

Sept. 6. Sat. Received letters from Ida, Will, Ada and Alma Locke and wrote to the children in the East. Hannah and Celeste came home. The over-dose of the anesthetic was necessary because he fought it so. Cost of the operation, in addition to the Hospital fees, was over $50. (T.S.R. 50. 2 P.M. 86. S.S. 76.)

Sept. 8. Mon. Darling Theresa has her birthday - 34 yrs old - so glad she is here, but she had to leave us today - went by auto-stage, and a telephone tonight, tells us of good trip and safe arrival. I gave her a new Bible

Sept. 10. Wednes. Church Trustees met here this P.M. and premium of Insurance Policy on meeting house paid for three years from last June. Received a letter from Willie and wrote to Theresa. Howard started with a band of his registered dairy cattle to exhibit at State Fair at Sacramento which opens next Sat. also James Thorp goes with some of his cattle and I think red pigs also. Locke Webster goes also with Howard, so has bidden us goodbye. Eunice plans to stay here till Sat. before leaving for home. She is reading aloud to me a humorous book by Rupert Hughes entitled "Excuse Me," detailing ridiculous situations in Pullman Cars on an Overland Express. (T.S.R. 50. 2 P.M. 89. S.S. 78.)

Sept. 11. Thurs. Susie Pascoe Cornish and little boys, with Bessie, her nurse girl, arrived today to make a little visit. Robert, of the same age as John Willard, is larger than he and more forward as he creeps all over on all fours, stands alone and takes several steps at a time. But he does not talk so plainly as John Willard, although he has more teeth. Susie has been at Santa Cruz with them, also at Berkeley and Oakland and she looks worn and weary. It is such a care to travel with babies. (T.S.R. 58. 2 P.M. 92. S.S. 80.)

Sept. 12. Fri. Estelle, with their automobile, took Eunice, Susie and her little boys to French Camp to call on Theresa, took lunch with her and they all enjoyed the little visit together. This was their only opportunity for seeing Theresa's new house - found all well. Received letter from Ada and Will Cooke and wrote to Mrs. Clements. (T.S.R. 52. 2 P.M. 85. S.S. 70.)

Sept. 13. Sat. All our guests left us this morning. Eunice and Susie plan to call on Nellie Bergquest in Sac. - see just a little of the Fair, then depart together at midnight for their respective homes. Now our house seems quiet indeed. Richard is a stirring little body and keeps things moving around him. Received a letter from Adelaide and wrote to the children in the East. Adelaide has sold their home in New York City and plans to return to Cincinnati to live with her own people. She must vacate the property on the 30th. (T.S.R. 48. 2 P.M. 78. S.S. 70.)