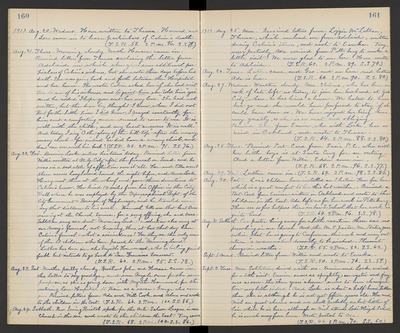 Aug. 21. Thurs. Morning cloudy. Uncle Horace came in. Received letter from Theresa enclosing the letter from Adelaide in which she gives some additional particulars of Calvin's sickness, but she wrote three days before his death. She was going back and forth between the Hospital and her home. She wrote Calvin asked her if she had written to me of his sickness, and to quiet him she told him "yes," and he added "I hope you sent her my love." She had not written, but the dear boy thought I knew, when I did not But for the little time I did know, I prayed constantly for him, and a comforting answer seemed to come to me "It is well with the child," and my heart answers "It is well." And today I sing "O the glory of the hill-top" - after the weary, weary climb - for indeed he did have a weary climb, and how can we wish him back? (T.S.R. 60. 2 P.M. 91. S.S. 76.)

Aug. 22. Fri. Bernice Locke enters her "teens" today. Received letter from Willie written at N.Y. City after the funeral on Sund. and he was in a sad state of affliction over it all. He and Etta went there across Long Island Sound the night before, Anna Locke Henry met them at the wharf and gave them directions to Calvin's house. He lived 14 miles from his Office in the City Hall where he was employed by the Topographical Dept. of the City Government - Borough of Highways, and he traveled everyday that distance to his work. Hannah tells me that last Sun. evening at the Church Service, for a song offering, she and Mrs. Sahlstrom sang as a duet. "Morning Land" - a selection also sung at our Mary's funeral, not knowing then it had that day been Calvin's funeral - what a coincidence! For they are the only one of the 13 children who have passed to the "Morning Land" - Luther has been in, also Myrtle Hammond, who is looking quite feeble but intends to go back to San Francisco tomorrow. (T.S.R. 60. 2 P.M. 95. S.S. 78.)

Aug. 23. Sat. Weather partly cloudy. Brothers John and Horace came in, the letter to say goodbye, and soon Myrtle came for the same purpose, as she is going down with Myrtle Hammond, for the entering Lane Hospital to train as a nurse. George also came in. Received letters from Ada and Will Cooke and Alma and wrote to the children in the East. (T.S.R. 66. 2 P.M. 100. S.S. 86.)

1913. Aug. 25. Mon. Received letters from Lizzie McLellan, Theresa, which enclosed our from Adelaide, written during Calvin's illness, and wrote to Eureka. Very unexpectedly, Ada arrived from Pittsburg to make a little visit. We were glad to see her. Have written to Adelaide. (T.S.R. 62. 2 P.M. 89. S.S. 74.)

Aug. 27. Wednes. Weather cloudy. Mrs. Stevens, who has been our cook of late, left us today to join her husband at Yuba City, where he has hired a house. We hated to have her go and she would have preferred to stay if she could have done so. We have enjoyed her being here very greatly, as she is so neat and obliging. Received letter from Eunice, who with Locke, has arrived in Oakland, and wrote to Theresa. (T.S.R. 64. 2 P.M. 88. S.S. 80.)

Aug. 30. Sat. Lou's children have installed an Electric Fan for her which is a great comfort to her this hot weather. Received a Post-Card from Eunice, written in Oakland and wrote to the children in the East. Ada left us for her work in Pittsburg. There are so few helpers there in her S. School that her work is quite hard. (T.S.R. 64. 2 P.M. 96. S.S. 78.)

Aug. 31. Sabbath. Our pastor being away for a little vacation there was no preaching in our church. And the M.E. pastor, Mr. Bates, gave notice that he is going to Conference this week and may not return, "a consummation devoutly to be wished. Pleasant change in weather. (T.S.R. 55. 2 P.M. 82. S.S. 62.)

Sept. 2. Tues. Mrs. Sahlstrom dined with us. Eunice and Locke arrived for a little visit. Eunice seems as sprightly, energetic and joyous as ever, the three years absence seems to have changed her very little indeed. And Locke is about a half-head taller than she is, although he is not yet fifteen years old. He and Niel are great chums and we shall probably see but little of him while he is here, although as Niel attends Lodi High School he is much away from home. Wrote postal to Ada. (T.S.R. 46. 2 P.M. 70. S.S. 60.)