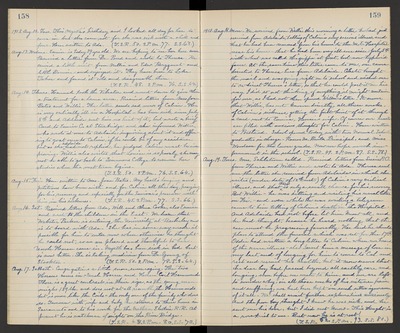 Aug. 13. Wednes. Eunice is today 39 yrs. old. We are hoping to see her here soon. Received a letter from Dr. Pond and wrote to Theresa. Received a little visit from Nellie and Edw. Bergquest and little Bernice and enjoyed it. They know been to Lake Tahoe and found it cold and disagreeable there. (T.S.R. 48. 2 P.M. 76. S.S. 64.)

Aug. 14. Thurs. Hannah took the Vibrator and went down to give Alice a treatment for a lame arm. Received letters from Mrs. Joan Bates and Willie. The latter sends sad news of Calvin. He is very critically ill in a Hospital - has been sick since July 5th and Adelaide sent him no hint of it, but wrote a brief Card to Eunice C. at Sturbridge and she informed Willie, who wrote to once to Adelaide inquiring about it and offering to goat once to Calvin, if he could be of any assistance but as she Adelaide had not replied, he judged Calvin must be improving. Willie also writes that Louise is so poorly she may not be able to go back to Simmons College to resume her studies when the next term begins. (T.S.R. 50. 2 P.M. 76. S.S. 64.)

Aug. 15. Fri. Have written to Mrs. Joan Bates. My heart's longing and petitions have been with and for Calvin all the day, praying for his recovery and especially for the Savior's presence with him in his sickness. (T.S.R. 45. 2 P.M. 77. S.S. 66.)

Aug. 16. Sat. Received letters from Ada, Will and Alma Cooke, also Eunice and wrote to the children in the East. We learn that Webster Parker is entering the University at Berkeley and is to board with Ada. She has in some way made it possible for him to enter now when otherwise he thought he could not, so we are pleased and thankful to her. Uncle Horace came in. Myrtle has been sick in bed but is now better. She is taking medicine from Dr. Young of Stockton. (T.S.R. 50. 2 P.M. 78. S.S. 64.)

Aug. 17. Sabbath. Congregations a little more encouraging. The two Horaces came in. - Uncle Horace and Horace Coil Hammond. There is a great contrast in their size, as the young man weighs 189 lbs. and does not at all resemble the Hammonds but is more like the Coils - the only one of the family who does so. Tomorrow with wife and baby he returns to their home in Sacramento and to his work for the Northern Electric R.R at present he is watchman of nights on the River Bridge. (T.S.R. 48. 2 P.M. 80. S.S. 70.)

1913. Aug. 18. Mon. We received from Willie this morning a letter he had just received from Adelaide, telling of Calvin's very serious illness, and that he had been removed from his home to the M.E. Hospital near his home, that he had been very ill ever since July 5th with what was called the "grippe" at first, but new typhoid fever. At the same time this letter came to me, one came directed to Theresa here from Adelaide. Celeste brought the mail and was going right on to school and wished me to re-direct Theresa's letter, so that he could post it on his way. I did so not thinking of anything it might certain for me, as I had not then opened Willie's letter. It seems that Willie, has not known directly, all these weeks, of Calvin's sickness, getting the first hint of it through a card sent to Eunice, Horace's wife. Of course our hearts are filled with anxious thoughts for Calvin. Have written to Portland. School opened today with two Normal School graduates in charge. Roscoe M. Barta, Principal, and Miss Woodson for the lower grades. Now we hope much improvement in the school. (T.S.R. 49. 2 P.M. 87. S.S. 78.)

Aug. 19. Tues. Mrs. Sahlstrom called. Received letters from Susie P.C. from Theresa and Willie and wrote to Ada. Theresa sent me the letter she received from Adelaide in which she writes (under date of 12th inst.) of Calvin's very critical illness, and that there is only a small chance for his recovery But Willie - he was sitting and writing his usual letter on Fri. - and even while he was writing a telegram came to him telling of Calvin's death in the Hospital. And Adelaide had not before let him knew all, and he had thought, because he heard nothing that the case must be progressing favorably. He said he should plan to attend the funeral which was set for the 17th. Eddie had written a long letter to Calvin when we heard of the severe illness - also I sent him a message of love in my last, and of longing for him to come to Cal. and rest and recruit his health, but it now seems that the dear boy had passed beyond all earthly care and longing, even before we wrote to him, and we are left to wonder why, in all those weeks of his intense pain and suffering, we had been kept in such utter ignorance of it all. We shall await further explorations anxiously. And the poor boy thought I knew he was sick, and he sent me his love, but I did not knows. This thought is a sore trial to me. But now he is at rest! (T.S.R. 52. 2 P.M. 93. S.S. 80.)