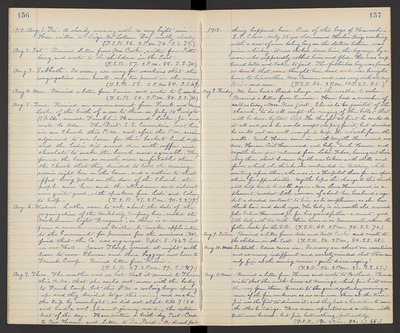 Aug. 5. Tues. Received an announcement from Frank and Maude Locke of the birth of a son to them on July 14th weight 11 1/2 lbs., named Franklin Hammond Locke, Jr. and wrote to Ada. The Dist. S.S. Convention met here in our Church this P.M. and after the P.M. session adjourned to our lawn for their basket lunch supper and the Ladies Aid served them with coffee and chocolate to make the lunch more agreeable. They found the lawn so much more comfortable than the Church that they decided to hold the evening session right here on the lawn, and a notice to that effect being posted on the door of the Church the people came here and the attendance and interest were quite good, with speakers from Lodi and Colony to help. (T.S.R. 47. 2 P.M. 90. S.S. 79.)

Aug. 6. Wednes. Luther came to ask about the date of the organization of the Military Company here, called the "Mokelumne Light Dragoons," as there is a movement from a member named Miller, to make application to the Government for pensions for the survivors. We find that the Co. was organized Sept. 5, 1863 here in our Hall. James Thorp arrived at night with team to move Theresa and their baggage now here to French Camp. Received letter from Willie. (T.S.R. 57. 2 P.M. 99. S.S. 87.)

Aug. 7. Thurs. The weather was so hot that it seemed to Theresa this A.M. that she could not move with the baby to French Camp, but this P.M a cooling breeze sprang up and they decided to go this evening and make the trip by moonlight, so did not start till 7:30 and had a cool, pleasant journey, avoiding the extreme heat of the day. Have written a birthday Post-Card to Bro. Horace and letter to Dr. Pond. A dreadful

1913. thing happened here. One of the boys of Hannah's S.S Clair, only 15 yrs. old, named Herlen King, working with a crew of men baling hay on the old Kerr bottom, was given whiskey, it was choked down him, the boy says, by a man who supposedly robbed him, and fled. He was captured later and taken to jail. The fatherless boy was found so drunk that some thought him dead and was brought home to his mother, Mrs. Cruson, and was very sick all day. It is a sad case. (T.S.R. 66. 2 P.M. 103. S.S. 85.)

Aug. 8. Friday. We have had a blessed changed in the weather to cooler. Received a letter from Eunice. Have had a number of callers today. Mrs. Kerr first. She is to be janitor of the church, to do all except the ringing of the bells, - that will be done by Edw. Lipp. He thought at first he could do it all and said he would accept no pay for it, but decided he could not see well enough to keep the cobwebs from the walls. Uncle Horace came in with Myrtle Hammond and Mrs. Horace Coil Hammond and baby. Uncle Horace and Myrtle have just returned from Lake Tahoe, having cut their stay there skirt because Myrtle was taken with chills and fever, which she thinks she contracted in Redding while waiting upon Alice, who was in a Hospital there for an operation for appendicitis. Myrtle hopes the change to this climate will help her to be well again. Mrs. Lena Hammond is a pleasant, modest little woman of about her husband's age but a decided contrast to him as to complexion, as she has black hair and dark eyes. The baby is sixth months old, named John Culver Hammond Jr. for his grandfather - a smart, good father works for the R.R. (T.S.R. 64. 2 P.M. 94. S.S. 72.)

Aug. 11. Mon. Received a letter from Theresa and wrote to Portland. Theresa writes that the milk-house at Morring's, which Jim built across the way from them, burned to the ground yesterday morning - cause of the fire unknown as no men were there at the time. Jim was the first to discover it, and they had a hard time to save the other buildings. Three cream separators and a steam milk tester were burned, but Jim lost nothing, fortunately. (T.S.R. 59. 2 P.M. 80. S.S. 66.)