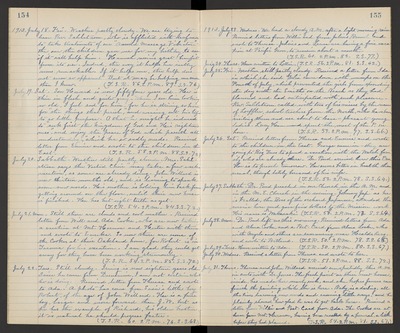 July 19. Sat. Son Howard is now fiftyfour years old. He is thin in flesh and quite gray. When I see him looking so old, I feel sad for him, for he is striving so hard for "the things that perish," and wearing out his life to so little purpose. O that he might be induced to "seek first the kingdom of God and His righteousness," and enjoy the "peace of God which passeth all understanding., "which he so sadly needs. Received letter from Eunice and wrote to the children in the East. (T.S.R. 58. 2 P.M. 88. S.S. 72.)

July 20. Sabbath. Weather still partly cloudy. Mrs. Sahlstrom says the "Vested Choir" may take a few weeks vacation, as some are already doing. John Willard is now thirteen months old, and is learning to speak some new words. His mother is holding him back from getting around on the floor, until their new house is finished. He has but eight teeth as yet. (T.S.R. 54. 2 P.M. 84. S.S. 72.)

July 21. Mon. Still there are clouds and cool weather. Received letter from Will and Ada Cooke, who are now taking a vacation at Mt. Hermon and Hester with them and wrote to Eureka. So now there are none of the Cookes at their Oakland home, for Robert is in Tacoma for his vacation. I am glad they could get away for they have been working strenuously. (T.S.R. 54. 2 P.M. 85. S.S. 72.)

July 22. Tues. Still cloudy. Irving is now eighteen years old. Since he came from Dunsmuir, I am not certain what he is doing. Received letter from Theresa and wrote to Ada. A photo has come from Susie's little boy Robert, of the age of John Willard. He is a fine boy, larger and more forward than J.W. but as he has the example of Richard, his older brother, it is natural he should progress faster. (T.S.R. 60. 2 P.M. 76. S.S. 68.)

July 25. Fri. Weather still partly cloudy. Received a letter from Ida in which she said Delia came down with mumps on the Fourth of July, which prevented the girls from spending the day with the Smiths on the Beach as they had planned and had anticipated with such pleasure. Rev. Sahlstrom called with two of his nieces by the name of Locffler, school teachers from the North, who have been visiting them and are about to leave - pleasant young ladies. Lucy Hammond spent the most of the P.M. here. (T.S.R. 53. 2 P.M. 77. S.S. 66.)

July 26. Sat. Received letters from Theresa and Eunice and wrote to the children in the East. George came in - they are going to Big Trees to spend a vacation with the Walsh family who are already there. Dr. Pond arrived here this P.M. He is to preach tomorrow. He seems better in health than usual, though lately bereaved of his wife. (T.S.R. 52. 2 P.M. 78. S.S. 64.)

July 31. Thurs. Theresa and John Willard arrived unexpectedly this A.M. in auto with Dr. Jones. The fresh paint on their new house, inside, has made her nearly sick, and she hopes James can finish the painting while she is here. Baby is darling, all the time learning new words and warning little ways, and he plainly showed how glad he was to get back here. Received a letter from Willie and Post-Card from Ada. The Cookes are at home from Mt. Hermon, having been recalled by a funeral, a little before they had planned. (T.S.R. 54. 2 P.M. 81. S.S. 67.)