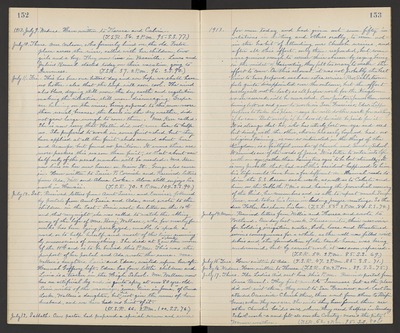 July 10. Thurs. Mrs. Nelson, who formerly lived on the old Foster place across the river, called with her children, two girls and a boy. They now live in Vacaville. Laura and Julius Bruml started today on their vacation, going to Inverness. (T.S.R. 57. 2 P.M. 96. S.S. 90.)

July 11. Fri. This has been our hottest day and we hope we shall have no hotter - also that the temp. will soon cool. The wind also blows, drying still more the dry earth and vegetation making the situation still more discouraging. Grapes are burning on the vines, being exposed to the sun more than usual, because the leaves in the dry weather, did not grow large enough to cover them. Mrs. Kerr called. She is now sorry that Hattie did not come here to help us. She preferred to work in some fruit-shed, but they have applied at all the fruit-sheds around about here and Acampo, but found no position. It seems there are more packers this season than fruit, so that about one-half only of the usual number will be needed. Mrs. Kerr now lives in her new house on Main St. George also came in. Have written to Susie P. Cornish and Received letters from Ada, Will and Alma Cooke. Alma still enjoys her work in Hawaii. (T.S.R. 70. 2 P.M. 104. S.S. 94.)

July 12. Sat. Received letters from Aunt Susie and Eunice, followed by postals from Aunt Susie and Ada, and wrote to the children in the East. Susie wrote her letter on the 10th and that very night she was called to watch the ebbing away of the life of Mrs. Benj. Wallace, who, for nearly four weeks has been lying paralyzed, unable to speak a word or to help herself, and most of the time seemingly unconscious of everything. She died at 8 o'clock in the morn of the 11th and is to be buried this P.M. This was the purport of her postal and Ada wrote the same. Mrs. Wallace's daughters, Lucia and Edna, waited upon her after Hannah Geffroy left. Edna has four little children and Lucia is a teacher in the High School. Mr. Wallace now has an artificial leg and is quite spry at over 80 yrs. old. Susie writes of the marriage, "sometime in June", of Erma Locke, Wallace's daughter, but did not give the name of her husband, and we have had no hint of it. (T.S.R. 66. 2 P.M. 100. S.S. 76.)

July 13. Sabbath. Our pastor had prepared a special sermon and service

1913. for men today and had given out some fifty invitations in writing and other rally, to men not in the habit of attending our Church services, and after all this effort, only three responded, but some were gracious enough to excuse their absence by saying, being in the midst of harvesting, they felt too weary to make the effort to come. On this account, it was not probably the best time to have proposed such an extra service. Rev. Sahlstrom feels quite disappointed over the outcome, but the effort surely will not be lost, as all proper work for the Kingdom we are assured, will be rewarded. Our Janitor, James Hammond having left us and gone to work in San Francisco, Edw. Lipp proposes to take his place - says he will do the work for nothing if he can. But surely, if he does it, he will be paid for it. It is strange that he, who has utterly lost one eye and sees but dimly with the other, who in his early boyhood had no religious training, is now so interested in the things of the Kingdom, is a faithful member of Church and Sunday School. It reminds one of the words of Jesus, "It is better to enter into life with one eye, rather than having two eyes" to be lost eternally. It is very probable that, had not this accident happened to him his life would have been a far different one. Hannah reads to him the S.S. lesson each week, as well as to Celeste and him on the Sabbath P.M.'s and having the proverbial memory of the blind, he remembers and is able to repeat much Scripture, and takes his turn in leading prayer meetings. So the dear Father has shown his love. (T.S.R. 55. 2 P.M. 84. S.S. 74.)

July 14. Mon. Received letters from Willie and Theresa and wrote to Portland. One day last week, Theresa writes, their reservoir, for holing irrigation water, broke loose and threatened serious consequences for a while, as the well was filled with debris and the foundation of the tank-house was being underwind, but by earnest work, it was soon repaired. (T.S.R. 54. 2 P.M. 85. S.S. 69.)

July 17. Thurs. The Ladies Aid met here this P.M. Received postal form Laura Bruml. They first went to Inverness but as the place did not suit them, they went to San Francisco, and last Sun attended Oceanside Church there, then went from there to Pacific Grove, where they now are. She writes they have formed there are other Churches besides ours, where they used helpers in Sunday School work - a used felt all over the Country - More's the pity! Warmer weather. (T.S.R. 52. 2 P.M. 95. S.S. 80.)