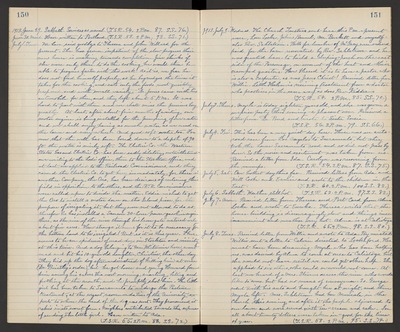 July 1. Tues. We have said goodbye to Theresa and John Willard for the present. She has grown impatient of the slow progress their new house is making towards completion. Jim thinks if she were only there to do the cooking, he would then be able to progress faster with the work! As it is, we fear he does not feed himself properly, as he begrudges the time it takes for the cooking, and eats only the foods most quickly prepared, and with small variety. Dr. Jones came with his automobile for them, and they left about 5 P.M. It was hard to part with them and we shall miss the precious boy greatly. At last, after about five months of waiting, our motor engine is being installed for the pumping of our water and we shall enjoy having as much water as we need on the lawn and everywhere. And good soft water, too. For now that the well has been bored down to a depth of 90 ft. the water is nicely soft. The Electric Co. the Western States Gas and Electric Co. - has been sadly dilatory, not withstand - our writing to the Lodi office, then to the Stockton office, and at last, we applied to the Railroad Commissioners, and they caused the Electric Co. to get busy immediately, for there is another Company, the Oro, has been desirous of entering this field in opposition to the others, and the R.R. Commissioners were called upon to decide the matter. Eddie wished to get the Oro to install a motor down on the Island piece, for the purpose of irrigating it, but they were not allowed to do so, therefore he has installed a Samson 30-house-power gasoline engine there, as the rise of the river through his levee gate watered only about five acres. How strange it sums for it to be necessary for the bottom land to be irrigated! But so it is this year. There seems to be an epidemic of mad dogs in Stockton and vicinity at this time. And a dog belonging to Mr. Whitmeier how, went mad and bit his 10-year old daughter, Christine, the other day. They tied up the dog afterwards instead of killing him at once (Dr. Priestley's order), but he got loose and young Howard found him among his calves the next morning, snarling, biting and frothing at the mouth, and he promptly shot him. The little girl has been taken to Sacramento to undergo the Pasteur treatment, at the urgent recommendation of the University Experts to whom the head of the dog was sent. They pronounced it rabies in its worst form. Neighbors contributed towards the expenses of sending the little girl. Have written to Ada. (T.S.R. 55. 2 P.M. 86. S.S. 72.)

1913. July 2. Wednes. The Church Trustees met here this P.M. - present were, Lou Locke, Julius Bruml, Mr. Burkett and myself - also Rev. Sahlstrom. Bills for lumber of McGary were ordered paid, for the barn renovated by Rev. Sahlstrom and he was granted have to build a sleeping - porch on the east side of the Parsonage, on account of the heat and their cramped quarters. How blessed it is to have a pastor who is also a carpenter, as was Jesus Christ! Received letter from Willie, Little Helen is receiving treatment from a doctor who practices in the same way as does Rev. Kidder. (T.S.R. 54. 2 P.M. 85. S.S. 70.)

July 4. Fri. This has been a very quiet day here. There was an auto - road race from Los Angeles to Sacramento, but they took the Lower Sacramento road and so did not pass by here. So the noise and excitement was taken from us. Received a letter from Ida. Carolyn was recovering from the mumps. (T.S.R. 54. 2 P.M. 87. S.S. 75.)

July 7. Mon. Received letter from Theresa and Post-Card from Alma Locke and wrote to Eureka. Theresa writes that the house building is discouragingly slow and things [?] inconvenient and weather very hot. Alma is at Calistoga (T.S.R. 65. 2 P.M. 98. S.S. 80.)

July 8. Received letter from Willie and wrote to Ada. By mistake Willie sent a letter to Calvin directed to Lockeford. He must have been dreaming. Myrle who has been helping us, was desired by Alma to come at once to Calistoga but she would not leave until we could get other help. She applied to six others, who could or would not come. At last we heard of a Mrs. Stevens across the river who would like to come but had no means of conveyance. So. George went with his auto and brought her at night, and there Myrle left. Mrs. Sahlstrom had her Musicals in the Church this evening and after it the people adjourned to our lawn and were served with ice-cream and cake. In all about twenty dollars were taken in - good for the time of your. (T.S.R. 58. 2 P.M. 95. S.S. 74.)