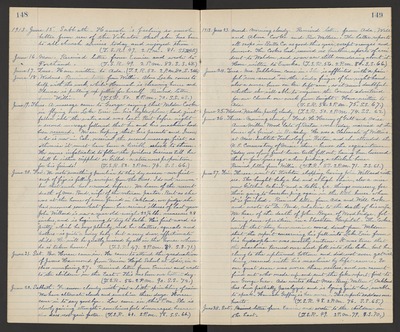 June 19. Thurs. A message came to George saying that Weldon Cooke in flying over Lake Erie in his hydroplane, had just fallen into the water and was lost. But before night a second message followed that he and his machine had been rescued. We are hoping that his parents and Irene, who is now in Cal., received the second message first, as otherwise it must have been a terrible shock to them. He seems infatuated to follow the perilous business till he shall be either crippled or killed - a strenuous proposition for his friends! (T.S.R. 52. 2 P.M. 74. S.S. 66.)

June 20. Fri. We note something peculiar to this day season - our first crop of figs is falling, unripe, from the trees. I do not remember that such has occurred before. We learn of the recent death of Mrs. Pond, wife of the veteran pastor. But as she was at the home of some friend in Oakland, we judge she had recovered somewhat from her serious illness of last year John Willard is now a year old - weighs 22 1/2 lbs. measures 28 inches, and is beginning to try to talk. His first word is "pretty," which he says plainly, and he chatters, squeals and hollers - is quite a noisy baby - but a very dear, affectionate child. He will be greatly missed by all in the house when he is taken home. (T.S.R. 47. 2 P.M. 84. S.S. 71.)

June 22. Sabbath. Forenoon cloudy with just a little sprinkling of rain. We have alternate clouds and sunshine these days. Horace came in to say goodbye. Lou came in this P.M. She is slowly gaining strength - sometimes feels discouraged because she does not gain faster. (T.S.R. 60. 2 P.M. 78. S.S. 66.)

1913. June 23. Mond. Morning cloudy. Received letters from Ada, Will and Alma Cooke and Rev. Wallace. The letter reports all crops in Butte Co. as good this year, except oranges and lemons. The Cookes had received no further reports of accident to Weldon, and so we are still wondering about it. Have written to Eureka. (T.S.R. 56. 2 P.M. 80. S.S. 66.)

June 24. Tues. Mrs. Sahlstrom come in. She is afflicted with a painful "run-around" on the index finger of her right hand also a severe burn on her left arm, so it seems doubtful weather she will able to engineer the Concert advertised for our Church one week from tonight. Have written to Ada. (T.S.R. 56. 2 P.M. 75. S.S. 67.)

June 26. Thurs. Morning cloudy. Fred. H. Harvey of Galt and Miss Anna Miller Wood late of Boston were today married at the house of a friend in Berkeley. He was a Classmate of Willie's at Mass. Institute Technology in Boston, and she attended the N.E. Conservatory of Music there - hence the acquaintance. Today one of my front lower teeth fell out, having been loosened three or four years ago, when picking a chicken-bone. Received letter from Willie. (T.S.R. 53. 2 P.M. 71. S.S. 61.)

June 27. Fri. Theresa went to Stockton shopping, leaving John Willard with us. She bought baby a bed and a high chair, also a nice new kitchen Cabinet and a table, x.c. things necessary for their going to housekeeping again in the little house where it is finished. Received letter from Ada and Will Cooke and wrote to Dr. Pond, relative to the death of his wife. We hear of the death of John Boyce of Woodbridge, following some operation in a Stockton Hospital. The Cookes write that they have received word direct from Weldon that the report concerning his fall into Lake Erie from his hydroplane was mostly untrue. It was true that the machine turned over and fell into the lake, but he clung to the upturned bottom and did not even get wet being reserved with his machine by life-savers. So our great scare was worse than useless, and we cannot find out who made up and sent the fake report, first to our George here. Ada writes that Mrs. Benj. Wallace of Oakland has been partially paralyzed and is lying quite low, unable to speak. Hannah Geffroy is her nurse. This reports saddens our hearts. (T.S.R. 48. 2 P.M. 76. S.S. 65.)