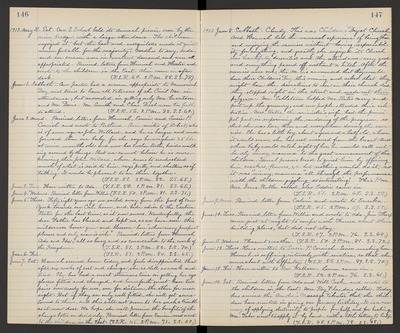 1913. May 31. Sat. Our S. School held its annual picnic over by the river bridge, with a large attendance. The children enjoyed it, but the heat and mosquitoes made it quite uncomfortable for the majority. Needless to say, soda and ice cream were in constant demand, and were all appropriated. Received letters from Hannah and Hester and wrote to the children in the East. Alice came in after dark. (T.S.R. 60. 2 P.M. 88. S.S. 73.)

June 1. Sabbath. Our pastor had a sermon appropriate to Memorial Day, and tried to have all Veterans of the Civil War in attendance, but succeeded in getting only Mr. Garretson and Mr. Davis. Mr. Smith and Chas. Dial were too feeble to attend. (T.S.R. 56. 2 P.M. 82. S.S. 64.)

June 2. Mond. Received letters from Hannah, Eunice and Susie P. Cornish and wrote to Portland. Susie writes of Robert, who is of same age as John Willard, and he is larger and more forward than our baby, for she says he weighed 25 lbs. at nine months old and now has twelve teeth, besides walking around by things. But we cannot believe he is more knowing than John Willard, whom seems to understand much of what is said to him, says "pretty" and chatters as if talking. It would be pleasant to see them together. (T.S.R. 51. 2 P.M. 82. S.S. 65.)

June 5. Thurs. Fifty eight years ago we sailed away from the port of New York towards our Cal. home, and bade adieu to the Eastern States for the last time, as it now seems. Wonderfully the dear Father has blessed and kept us, as we have seen this wilderness home grow and blossom - here "where every prospect pleases and only man is vile." Received letters from Hannah, Ada and Ida, all so busy and so consecrated to the work of the Kingdom. (T.S.R. 51. 2 P.M. 82. S.S. 70.)

June 7. Sat. Hannah arrived home today and feels disappointed that after six weeks of rest and change she is still so weak and tired. She has had a most strenuous time in getting her eye-glasses fitted and changed, and henceforth must have two pairs ever ready for use, one for distance, the other for near sight. But if they are only well fitted, she will get accustomed to them, and this will not seem to her such a trouble as it now does. We hope she will perceive the benefits of the change later on decidedly. Received letter from Eunice and wrote to the children in the East. (T.S.R. 45. 2 P.M. 71. S.S. 60.)

1913. June 8. Sabbath. Cloudy. This was Children's Day at Church and Hannah had the unusual experience of being there and enjoying the exercises without having responsibility for anything, and greatly she enjoyed it. Church was beautifully decorated and the attendance very good and everything passed off without a hitch. After the exercises were over, the M.E.'s announced that they would have their Children's Day this evening and asked that they might have the decorations to use in their church. And they stopped right in the street and made out their program. Mr. Sahlstrom helped Mr. Bates carry and put up the greenery, and our people attended their celebration. Mrs. Bates, the minister's wife, had the principal part in supervising the rendering of the program, so that she was here, there and everywhere during the exercises. She has a little boy, about a year and half old, whom, it would seem, she has not weaned from the breast. And when baby would catch sight of her, he would call out loudly "ninny, mamma" to the great amusement of the children. Several persons tried to quiet him by offering him crackers, flowers, x.c. but nothing would do it, so it was "ninny, mamma" all through the performance with the children giggling - so interesting! This P.M. Mrs. Irma Butter called, also Eddie came in. (T.S.R. 51. 2 P.M. 68. S.S. 59.)