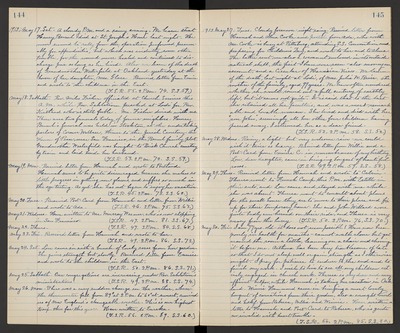 1913. May 17. Sat. A cloudy P.M. and a rainy evening. We learn that Henry Bruml died at St. Joseph's Home last night. He never seemed to rally from the operation performed presumably for appendicitis, but which was evidently some other trouble, for the wound never healed and continued to discharge pus as long as he lived. Also we learn of the death of Grandmother Westerfield at Oakland yesterday at the home of her daughter, Mrs. Glace Received letter from Eunice and wrote to the children in the East. (T.S.R. 55. 2 P.M. 74. S.S. 59.)

May 18. Sabbath. Rev. Miles Fisher officiated at Church Services this A.M. while Rev. Sahlstrom preached at Lodi for Rev. Kirtland who is still feeble. Mr. Fisher dined with us. There were two funerals today of former neighbors. Henry Bruml's funeral was held in Stockton at the undertaking parlors of Coroner Wallace, thence to the Jewish Cemetery - the Home of Peaer, near San Francisco, in the Bruml family plot. Grandmother Westerfield was brought to Brick Church cemetery by train and laid beside her husband. (T.S.R. 53. 2 P.M. 72. S.S. 59.)

May 19. Mon. Received letter from Hannah and wrote to Portland. Hannah seems to be quite discouraged because she makes so little progress in getting new glasses, and suffers so much in the eye testing. As yet she has not begun to enjoy her vacation. (T.S.R. 45. 2 P.M. 73. S.S. 60.)

1913. May 27. Tues. Cloudy forenoon - night rainy. Received letters from Hannah and Alma Cooke and postal from Ada, who with Mr. Cooke is busy at Pittsburg, attending S.S. Convention and preparing for Children's Day, and wrote to her and to Alma. The letter sent me also a cocoanut enclosed in its outside natural shell, the first I have ever seen - also money on account, and a Circular of Hawaiian Views. Welcome of the death, last night at Lodi, of Mrs. Julia W. Brier, the mother of the family, aged 99 years. We have often wondered whether she would round out a full century of earthly life, but it seems not quite. It is said that to the last she retained all her faculties, and was a most remarkable and lovable woman. She lived a died with her "son John," seemingly all her other four children having passed away. I esteemed her as a dear friend. (T.S.R. 52. 2 P.M. 58. S.S. 52.)

May 28. Wednes. Rainy, a light but very welcome rain - we could wish it twice as heavy. Received letter from Willie and a Post-Card from Eunice C. in remembrance of my birthday. Lou, dear daughter, came in bringing bouquet of beautiful roses. (T.S.R. 49. 2 P.M. 59. S.S. 58.)

May 29. Thurs. Received letter from Hannah and wrote to Calvin. Theresa went to French Camp this P.M. with Estelle in their auto, and Lou came and stayed with me while she was absent. Theresa went to consult about plans for the small house they are to move to their place and fix up for their temporary home. She and John Willard were quite badly sun-burned on their ride, and Theresa is very weary from the hurry. (T.S.R. 50. 2 P.M. 76. S.S. 70.)

May 30. Fri. I am 77 yrs. old. it does not seem possible! Have now been poorly in health for months - cannot walk alone but get around the room a little, leaning on a chair and shoving it before me. Asthma has been very troublesome of late so that I do not sleep well or gain strength as I otherwise might. I pray for patience to endure to the end and to finish my work. I wish to live to see all my children actively engaged in Church work. Theresa is my dear and very efficient helper, while Hannah is taking her vacation in Oakland. Winnie Hammond came in bringing a most lovely bouquet of carnations from their garden, also a wrought towel and hdkf. from Rebecca, Nellie and Winnie. Have written a letter to Hannah and Post-Card to Rebecca, who is quite an invalid with heart trouble. (T.S.R. 56. 2 P.M. 85. S.S. 80.)