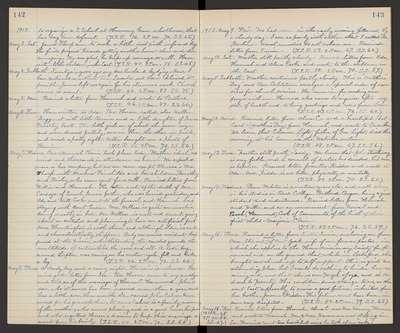 May 3. Sat. James Thorp came to make a little visit with wife and boy. He finds progress towards getting another home slow and discouraging. We are glad he keeps up courage so well. Have written to the children in the East. (T.S.R. 40. 2 P.M. 78. S.S. 68.)

May 4. Sabbath. Twenty six years ago my dear husband lay dying. And I have continued on without him. I would not have believed it possible. James left us again for his strenous work. Church services as usual. (T.S.R. 44. 2 P.M. 83. S.S. 75.)

May 6. Tues. Have written to Ada. Bro. Horace called, also Nellie Bergquest with little Bernice and a little daughter of Irene Priestley Scott. The little girls are of about the same size and were dressed prettily, one in blue, the other in pink, and made a pretty sight. Nellie brought me a photo of Bernice. (T.S.R. 45. 2 P.M. 70. S.S. 56.)

May 7. Wednes. Our Annual Picnic took place today. Weather ideal, no wind and thousands in attendance as usual. We expected more or less company, but no one came except Theresa's Ma Thorp with Mamie Fairchilds and her children, Dorothy and Bailey, who came just for a call. Received letters from Willie and Hannah. The latter wrote of the death of Mr. Cardoza of Sunol, Irene's father, who was buried yesterday, and Ada and Will Cooke went to the funeral, and Hannah was staying with Aunt Susie. Mrs. Wallace is quite an invalid being mostly in bed. Mrs. Wallace is well and smart, going about on crutches and planning to have an artificial foot Mrs. Huntington is with them, and although older, is well and characteristically chipper. Only one serious accident happened at the picnic, notwithstanding the crowded grounds, the multitude of automobiles, the races, and all. A Lodi boy named Lupton, was racing on his motor-cycle, fell and broke a leg. (T.S.R. 46. 2 P.M. 70. S.S. 66.)

May 8. Thurs. A cloudy day and a rainy night. The rain is welcome. Received good letter from Ida. Bro. Horace came to say goodbye and told us of the marriage of Horace C. Hammond, John's son, who it seems has been married more than a year and has a little son, three months old, named John Culver Hammond for his grandfather. It seems Culver is a family name of the mother, who seems pleasing and is a good house keeper and who regretted Horace's decision to keep their marriage a secret from his family. (T.S.R. 44. 2 P.M. 70. S.S. 60.)

May 11. Sabbath. Weather continues partly cloudy. This is "Mother's day" and Rev. Sahlstrom arranged a special order of exercises for church services. He came in for reading and prayer with me. Howard also came to inquire after my state of health and to bring greetings and roses from Lou. (T.S.R. 43. 2 P.M. 72. S.S. 60.)

May 13. Tues. Weather still partly cloudy. We learn that John Hetherway is very feeble, and a council of doctors has decided his case is hopeless. Received letter from Rev. Kidder and wrote to Ada. Mrs. Kidder is no better, physically or mentally. (T.S.R. 42. 2 P.M. 70. S.S. 61.)

May 14. Wednes. Dean Webster is seventeen years old, and well along in his studies in Reed College, Portland, Oregon, being a good student and industrious. Received letters from Hannah and Willie, and an announcement from Normal and Pearl (Hammond) Cook of Sacramento, of the birth of their first child - Marjorie Claire. (T.S.R. 43. 2 P.M. 76. S.S. 59.)

May 15. Thurs. Received a letter from Sister Susie, enclosing one from Mrs. Stewart now of New York, wife of our former pastor, in which she applies to the Home Missionary Society for financial aid, on the ground that, while in Lockeford she brought our church up to self-support. This is quite an astounding plea, but I would do nothing to hinder her receiving aid, now that she is over 70 yrs. of age, and is reduced to poverty. This condition seems strange for res, as she went East, supposedly to receive a good fortune, inherited from her brother, Jerome Kidder. This future must have been, in some way, dissipated. (T.S.R. 42. 2 P.M. 79. S.S. 63.)