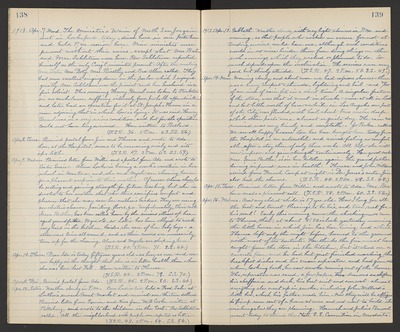 1913. Apr. 7. Mond. The Minister's Union of North San Joaquin met in Lockeford today, dined here in our kitchen and help P.M. session here. Nine ministers were present without their wives, except that Mrs. Bates and Mrs. Sahlstrom were here. Rev. Sahlstrom reported himself as the only Cong'l minister present. After the meeting Mrs. Bates, Mrs. Doty, Mrs. Priestley and Ora Allen called. They had some excellent singing down in the parlor which I enjoyed greatly. Mrs. Sahlstrom was the pianist and her husband is a fine soloist. This morning Henry Bruml was taken to Stockton in an ambulance, suffering intensely from probable appendicitis and later had an operation for it at St. Joseph's Home in a room adjoining that in which Lou is lying. It was said Henry Bruml was in a very serious condition, and but for the operation could not have long survived. Have written to Portland. (T.S.R. 36. 2 P.M. 63. S.S. 56.)

Apr. 9. Wednes. Received letter from Willie and a postal from Ada and wrote to Sister Susie. Alma Locke is having a week's vacation in her school in Manteca, and she and Myrle are cleaning house for a pleasant surprise to their mother. Of course Alma should be resting and gaining strength for future teaching but she is devoted to her mother that she thus sacrifices comfort and pleasure that she may ease her mother's burdens. They are using an electric cleaner, painting floors, D.C. Unfortunately, their cook Irma Butler, has been called home by the serious illness of her aged grandfather, 90 yrs. old, so Lottie has been obliged to work very hard in the kitchen, besides the care of her baby boys - a strenuous time all around, and as their rooms are necessarily torn up for the cleaning, Alma and Myrle are sleeping here. (T.S.R. 40. 2 P.M. 71. S.S. 64.)

Apr. 12. Satur. Weather cloudy in P.M. Our Ladies Aid held a Food Sale at Luther's unused Meat Market and received our thirteen dollars. Received letter from Eunice and two from Will Cooke written at Pittsburg, and wrote to the children in the East. Rev. Sahlstrom called. All the neighborhood sick people are reported as better. (T.S.R. 43. 2 P.M. 64. S.S. 54.)

1913. Apr. 13. Sabbath. Weather cloudy with very light showers in P.M. and evening, so that people who wished an excuse for not attending services, could have one, although such conditions world in no wise hinder them from doing things on other such evenings, which they wished or planned to do. So much depends upon the inclination. The services were very good but thinly attended. (T.S.R. 47. 2 P.M. 51. S.S. 49.)

Apr. 14. Mon. Morning cloudy, and about noon we had copies showers - these was a heavy tempest - thunder, lightning and hail - and 70/100 of an inch of rain fell in a short time. A singular feature of the storm was that it went in streaks - none at all in Lodi and but little north of here - while in Los Angeles are part of the City was flooded, with hail about two inches deep while other parts were almost or quite dry. The rain we received was very timely and acceptable. Jo Parker called. We are all happy because Lou has been brought home today from the Hospital in an automobile and arrived feeling so comfortable, after a stay there of only three weeks. All hope she will now improve and gain strength continuously. He good cook Mrs. Irma Butler, is in her kitchen again, the grandfather having improved some in health. Theresa and John Willard arrived from French Camp at night in Dr. Jones's auto. Jim also had the showers. (T.S.R. 44. 2 P.M. 48. S.S. 48.)

Apr. 16. Wednes. Now my eldest child is 57 yrs. old. How I long for all the best and truest blessings to be his, and true rest for his soul! Early this morning came the shocking news came to Theresa, that, at about 8:30 o'clock yesterday morning the little house in which Jim has been living, and which Theresa left only the night before, burned to the ground with most of its contents. He thinks the fire must have caught from the stove in the kitchen, but it stood on a concrete floor, and he had but just finished washing the breakfast dishes and his cream separator, and had gone and when, looking back, he saw smoke coming out of the house. The separator was saved, a few papers, two drawers each from his chiffonier and desk, his best suit and over coat - almost everything else went up in smoke, including John Willard's little bed, which his father made him. Now they will be obliged to fix up some sort of a home at once and not wait to build the nice bungalow they are planning. Hannah and Julius Bruml went today to attend the State S.S. Convention in Modesto.