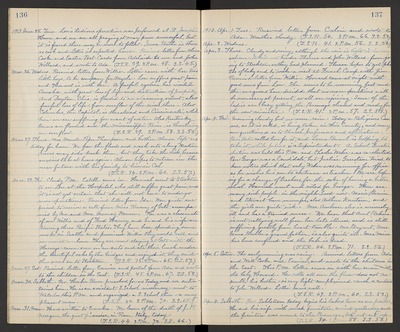 1913. Mar. 25. Tues. Lou's tedious operation was performed at St. Josephine's Home, and we are all praying it may prove successful, but it is feared there may be more to follow. Irma Butter is there as cook and Lottie is expected home. Received letter from Alma Cooke and Easter Post-Cards from Adelaide to me and John Willard, and wrote to Ada. (T.S.R. 29. 2 P.M. 48. S.S. 45.)

Mar. 26. Wednes. Received letter from Willie. Lottie came with her two little boys, to be company for Myrle. Lou suffers great pain and Howard is with her. A fearful cyclone has visited Omaha, with great loss of life and destruction of property. And Dayton, Ohio, is flooded to an alarming extent, also fearful loss of life, from over flow of the rivers there. Also Columbus, the Capitol, is threatened and Cincinnati, while here we are suffering for want of water. Also Kentucky towns an flooded and the Mississippi River is threatening an overflow. (T.S.R. 29. 2 P.M. 58. S.S. 52.)

Mar. 27. Thurs. Mrs. Maude Piper Thompson and brother Almon left us today for home. We fear the floods and wash-outs along Western rivers may side-tract them, but they take the risk, because anxious to be at home again. Almon hopes to return in the near future with his family to live in Cal. (T.S.R. 34. 2 P.M. 60. S.S. 57.)

Mar. 28. Fri. Cloudy P.M. Estelle came in. Hannah went to Stockton to see Lou at the Hospital, who still suffers great pain, and it is not yet certain that she will not have to undergo more operations. Received letter from Ida. Were quite surprised to receive a call from Miss Harvey of Galt, accompanied by Mr. and Mrs. Murray Warner. He was a classmate of our Willie and of Fred Harvey, and he and his wife are touring these Pacific States. They have been spending some weeks in Seattle and promised Willie they would call and see me at our home. They are now staying at Galt with the Harveys - came over in an auto and ate their lunch under the beautiful oaks by the bridges and enjoyed it, they said - then went on to Stockton. (T.S.R. 35. 2 P.M. 65. S.S. 57.)

Apr. 3. Thurs. Cloudy and rainy, although the rain is light it is very welcome. It did not hinder Theresa and John Willard from going to Stockton, as they had planned. Theresa hopes to get photos of baby and to make a visit at French Camp with Jim. Received letter from Willie. Howard came at night with good news from Lou. She seems to be recovering fast and the surgeons have decided that no more operations will be necessary at present, so all are rejoicing. Some of the ladies are busy getting the Parsonage cleaned and ready for the new minister. (T.S.R. 41. 2 P.M. 57. S.S. 53.)

Apr. 4. Fri. Morning cloudy but no more rain. Today a Religious Census, as it is called, is being taken in this County, and every one questioned as to Church preferences and affiliations. Rev. Bates called here for it, and Laura Bruml is helping to take it, while Julius is a Superintendent. A School Trustee election was held this P.M. and Charles Weber was re-elected. Our George was a Candidate, but Justice Garretson tried to have voters think that only Weber was running for office as he wishes his son to continue as teacher. We are hoping for a change of teachers, for the sake of having a better school. Hannah went and voted for George. There are many sick people in the neighborhood now. Marie, Bernice and Stewart have mumps, also Arthur Knutsen, and the girls are quite sick. Mrs. Ambrose also is seriously ill and has a trained nurse. We hear that Aunt Rebecca is not rallying well from her late illness, and is still suffering greatly from heart trouble. Mr. Bryant, Mrs. Irma Butler's grandfather, is also quite ill. Mrs. Meier has been confined and the babe is dead. (T.S.R. 46. 2 P.M. 71. S.S. 56.)

Apr. 5. Satur. The early morning was rainy. Received letters from Ada and Will Cooke and Eunice, and wrote to the children in the East. This P.M. Lottie came in with her seven months old baby Howard. He rolls all over the floor - does not resemble his brother - is very light complexioned - such a contrast to John Willard. Lottie seems well. (T.S.R. 47. 2 P.M. 60. S.S. 52.)