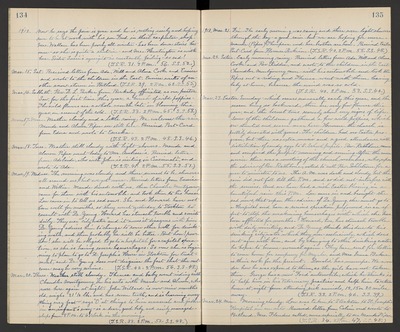 1913. Now he says the pain is gone and he is resting easily and hoping soon to be at work with his son Fred in their carpenter shop. Mrs. Wallace has been poorly all winter has been down stairs but once - so she is quite a shut-in and Mrs. Huntington is with her. Sister Susie's eyesight is constantly failing - so sad! (T.S.R. 31. 2 P.M. 56. S.S. 52.)

Mar. 19. Wednes. The morning was cloudy and there seemed to be showers all around us, but we got none. Received letters from Eunice and Willie. Maude dined with us, then Chandler Montgomery came for them with his automobile and took them to his house. Lou came in to tell us sad news. She and Howard have not been well for months, so they went yesterday to Stockton to consult with Dr. Young. Howard has stomach trouble and vomits daily. They use "city water" and it seems it disagrees with him. Dr. Young advises him to change to some other well for drinking water, and then probably he will be better. But Lou! poor Lou! she will be obliged to go to a hospital for a capital operation, as she is having severe hemorrhages. So now she is beginning to plan to go to St. Joseph's Home in Stockton for treatment, and Dr. Young does not disguise the fact that the outcome may be very serious. (T.S.R. 42. 2 P.M. 56. S.S. 48.)

Mar. 20. Thurs. Weather still cloudy. Theresa and baby went riding with Chandler Montgomery in his auto with Maude and Almon, who were here again at night. John Willard is now nine months old, weighs 21 1/2 lbs. and has seven teeth, and is learning everything very fast - says "O" at things to him unusual and jabbers in an infant's way - is a dear, good baby and easily managed - sleeps from 8 P.M. to 6 o'clock in the morning. (T.S.R. 33. 2 P.M. 52. S.S. 48.)

Mar. 22. Satur. Early morning rainy. Received letters from Ada, Will and Alma Cooke and Rev. Kidder, and wrote to the children in the East. Chandler Montgomery came with his automobile and took the Pipers out a riding and Theresa went with them, leaving baby at home, because the wind was so cold. (T.S.R. 40. 2 P.M. 53. S.S. 44.)

Mar. 23. Easter Sunday. which occurs unusually early this year, and the season being so backward, there are very few flowers this year and the locust trees scarcely show any signs of life. Some of the children gathered a few wild poppies, which are stunted and scarce near here. However the church is prettily decorated with greens. The children had no Easter program, but there was extra music and a good attendance with distribution of candy eggs to S. School pupils. Rev. Rathbone came and occupied the pulpit morning and evening. After the morn service there was a meeting of the church members, who upon the advice of Rev. Rathbone, voted to call Rev. Sahlstrom for a year to minister to us. The A.M. was dark and cloudy but the rain did not fall till the P.M. and so did not interfere with the services. And we have had a rich Easter blessing in a bountiful rain this P.M. Lou came in and brought the sad news, that upon the advice of Dr. Young, she must go to a Hospital and have a serious operation performed in an effort to stop the weakening hemorrhages with which she has been officiated for months. Howard, too, has stomach trouble with daily vomiting, and Dr. Young thinks this due to his drinking "city water" which they use exclusively, which does not agree with him, and by changing to other drinking water he hopes to become normal again. They have sent for Lottie to come home for company for Myrle, and Mrs. Irma Baker is their cook for the present. Donald has mumps. We wonder how he was exposed to them, as the girls have not taken them. George has a new "Ford" automobile, which he thinks is to help him in his Veterinary practice and help him to return home at night from attending sick animals, 12, 15 or 20 miles away. (T.S.R. 33. 2 P.M. 46. S.S. 39.)