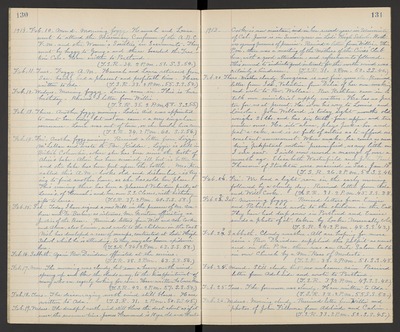 Feb. 14. Fri. Another foggy morning. Received a letter from Lizzie McLellan and wrote to Rev. Kidder. Lizzie is still in British Columbia, where she has been since the birth of Alice's babe. Alice has been seriously ill but is better now and the babe has been put upon the bottle. Mrs. Kerr called this A.M. - looks old and disheveled - is trying to find another home, as she has sold her place. This evening there has been a pleasant Valentine party at Laura's of Hannah's and her own S.S. Classes, with birthday gifts to Laura. (T.S.R. 37. 2 P.M. 60. S.S. 58.)

Feb. 15. Sat. Today I have signed a new Will in the presence of Mr. Ambrose and Dr. Barbour as witnesses, Mr. Garretson officiating as Justice of the Peace. Received letters from Will and Ada Cooke and Alma, also Eunice, and wrote to the children in the East Neil has developed a case of mumps, contracted at Lodi High School, which he is attending. So they may also become epidemic here. (T.S.R. 36. 2 P.M. 63. S.S. 58.)

Feb. 19. Wednes. The dreadful north wind still blows the dust about as if it were the summer time. James Hammond is 18 yrs. old and Hester

1913. Cooke is now nineteen, and in her second year in University of Cal. James is in Senior year in Lodi High School. Both are young persons of promise. Received a letter from Willie. This P.M. there was a meeting of the Mothers of the Civics Club here, with a good attendance and refreshments followed. This seemed to indicate good interests, for the north wind was certainly a hindrance. (T.S.R. 31. 2 P.M. 52. S.S. 46.)

Feb. 20. Thurs. Weather cloudy. Georgiana is now five years old. Received letter from Ida, Valentine from Delia of her own making and wrote to Rev. Wallace. Rev. Rathbone came in to talk over ministerial supply matters. He has no pastor for us at present. he is on his way to Loomis and Lincoln. John Willard is today eight months old weighs 21 lbs. and has six teeth - four upper and two under ones. He sits alone, plays peek-a-boo and pat-a-cake, and is so full of antics as to afford us constant amusement. When awake, he comes as near being "perpetual motion" personified, as any little one I ever saw. I will now record a marriage of over a month ago. Elisabeth Westerfield and John Paul Thommen of Stockton were married in Sac. Jan. 18th (T.S.R. 26. 2 P.M. 52. S.S. 46.)