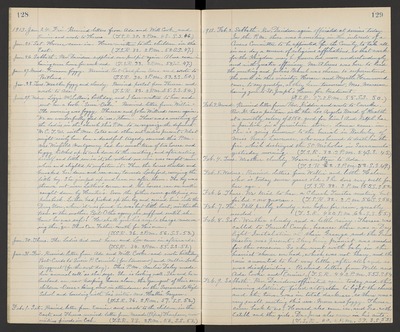 Jan. 29. Wednes. Lizzie McLellan's birthday and I have written to her and sent her a book - "Seven-Oaks." Received letter from Willie. The morning was foggy. Theresa and John Willard came again. We are wonderfully glad to see them. There was a meeting of the ladies in the church this P.M. to re-organize the defunct W.C.T.W. with Mrs. Estes and other out-siders present. What might easily have been a dreadful tragedy occurred this P.M. Mrs. Winfield Montgomery had her usual team of two horses and buggy hitched up to come down to the meeting, and after seating herself and little son in it, she noticed one rein was caught somewhere and alighted to unfasten it. Then the horses started and knocked her down and ran away towards Lockeford, carrying the little boy. She jumped up and ran on after them. The boy was thrown out near Luther's corner and the horses ran on until caught down by Hunter's. Soon the father came galloping on horseback. Luther had picked up the boy and carried him into the Drug Store, where it was found he was but little hurt, neither the team or the mother. But O the agony she suffered until she knew he was safe! "He shall give his angels charge concerning thee," D.c. Thus Our Father careth for His own. (T.S.R. 36. 2 P.M. 56. S.S. 53.)

Jan. 31. Fri. Received letter from Ada and Will Cooke and wrote birthday Post-Cards to Susie P. Cornish (for tomorrow) and Nellie Locke Bergquest (for the next day). This P.M. Amelia Daley made her "annual call' as she says. She is looking well. She and her husband are now keeping house alone, the youngest of their seven children. O sear - being now in attendance on the Sacramento High School and boarding with his sister. Mrs. Hattie Gaynor. (T.S.R. 36. 2 P.M. 57. S.S. 52.)

1913. Feb. 2. Sabbath. Rev. Davidson again officiated at services today. In the P.M. there was a meeting in the interests of a Census Committee to be appointed for the County to take all in one day a census of religious affiliations, so that work for the Kingdom may be presented more understandingly and with greater efficiency. Mr. Ahrens was here to lead the meeting and Julius Bruml was chosen to superintend the work in this vicinity. Horace and Myrtle Hammond came to say goodbye, as they leave tomorrow, Mrs. Marceau having gone to St. Joseph's Home for treatment. (T.S.R. 37. 2 P.M. 55. S.S. 50.)

Feb. 3. Mond. Received letter from Rev. Kidder and wrote to Eureka. Rev. K. has a position with the Los Angeles Board of Health at a monthly salary of $150. good for him! And Ralph has a position in a furniture store. Laura came in. She is going tomorrow to the burial in Berkeley of Miss Nora Lawrence, who was burned to death in the fire which destroyed the St. Nicholas in Sacramento yesterday morning. (T.S.R. 32. 2 P.M. 54. S.S. 45.)

Feb. 8. Sat. weather cloudy and a little rainy. Theresa was called to French Camp, because there was a Daylight Instalation at their Grange, and the Grand Master was present. She, being pianist was needed for the occasion. So she went with baby in the heaviest shower we had, which was not heavy, and the rain amounted to but very little, after all, and so was disappointing. Received letters from Will and Ada Cooke and Eunice. (T.S.R. 44. 2 P.M. 55. S.S. 54.)

Feb. 9. Sabbath. Rev. Davidson officiated again today, and this evening electricity failed altogether to light the church and the town was in total darkness, so there was a very small meeting this eve. [?] was foggy. Theresa came back to us. Howard also came in, and Geo. with Estelle and the girls. Dr. Jones also came in his auto. (T.S.R. 40. 2 P.M. 57. S.S. 53.)