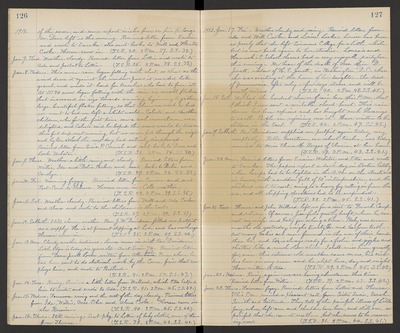 Jan. 8. Wednes. This morn rain began falling with sleet, so that as the wind drove it against the window-panes it sounded like gravel, and made it hard for travelers who had to face it. At 11:30 snow began falling with the rain in small flakes that increased in size towards evening, beginning to gather large, beautiful flakes falling, so that when we went to bed we went to bed we left a white world. Celeste, and the other children, who, for the first time saw a real snowstorm, were delighted, and Celeste said he hoped the snow would be two or three feet deep next morning but no more fell through the night and by ten o'clock the next day, had entirely disappeared. Received letter from Susie P. Cornish and sent books to Dean and Locke Webster. (T.S.R. 31. 2 P.M. 34. S.S. 30.)

Jan. 13. Mon. Cloudy weather continues. Laura came in with Rev. Davidson. Little Olga is today six years old. Aunt Susie 74. Received letter from Dean Jewett Locke, written from Allen dale, Penn. where he had been sent to do electrical work, by the Coun. firm that employs him, and wrote to Portland. (T.S.R. 41. 2 P.M. 50. S.S. 47.)

1913. Jan. 17. Fri. weather cloudy and rainy. Received letters from Ada and Will Cooke and Louise Locke. Louise has been so poorly that she left Simmons College for a little while but is now back again to her studies. Laura's and Hannah's S.School classes had a very enjoyable party here this evening. We hear of the death of Mrs. Alice D. Jewett, widow of H.E Jewett, in Washington, D.C. where she was visiting at the home of her daughter. She died of pneumonia, after only a few days' illness, and will be greatly missed. (T.S.R. 40. 2 P.M. 48. S.S. 45.)

Jan. 18. Sat. We had the hardest shower of rain here this P.M. that I think I ever saw a veritable cloud burst. This rainstorm has been copious and has brought such blessings to us all. People are rejoicing over it. Have written to the children in the East. (T.S.R. 42. 2 P.M. 47. S.S. 45.)

Jan. 20. Mon. Received letters from Eunice Webster and Etta and wrote to Eureka. The papers report a dark day in Boston lately when lamps had to be lighted in the A.M. on the streets and in houses, with a sudden fall of 10- in temperature, and the chickens went to roast, owing to a heavy fog rolling in from the sea, and all shipping operations had to be suspended. (T.S.R. 28. 2 P.M. 45. S.S. 41.)

Jan. 21. Tues. Theresa and John Willard left us for a visit to French Camp and return. Of course, Jim feels greatly bereft, when he can not see wife and baby for so long a time. Baby was seven months old yesterday, weighs twenty lbs. and has four teeth. Not many babies are more forward in the use of their hands than he, and he is always ready for a frolic and giggles and chatters like a much older child. I shall miss him greatly for, since this extreme cold weather came on us, his crib has been in any room and he slept here, day and night. Have written to Ada. (T.S.R. 29. 2 P.M. 45. S.S. 43.)

Jan. 23. Thurs. Forenoon foggy. Received letters from Lottie and Theresa. This P.M. received a pleasant call from Sister Susie, Sarah Smith and Gertrude. They tell of the painful illness of Lillas Jory, whose left arm and shoulder have been, and still are so painful that she cannot use them, but she seems to be recovering now. (T.S.R. 31. 2 P.M. 44. S.S. 41.)