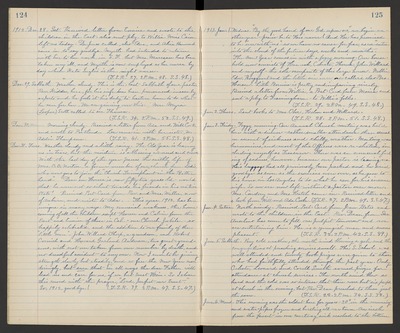 1912. Dec. 28. Sat. Received letter from Eunice and wrote to the children in the East - also sent pkg. to Willie Miss Cain left us today. Dr. Jones called, also Edna, and Alice Hammond came in to say goodbye. Myrtle had intended to return with her to her work in S.F. but Mrs. Marceau has been taken very ill, and Myrtle is now employed as her nurse by day while Kate Inglis is the night nurse. (T.S.R. 27. 2 P.M. 48. S.S. 48.)

Dec. 29. Sabbath. Weather cloudy. This is the last Sabbath of our pastor Rev. Kidder, here, for his wife has been pronounced insane by experts and he feels it his duty to hasten home to do what he can for her. we are grieving over this. Mrs. Myra (Lopher) Scott called to see Theresa. (T.S.R. 34. 2 P.M. 52. S.S. 49.)

Dec. 31. Tues. Weather cloudy and a little rainy. The Old Year is leaving us in tears, but the moisture is a blessing we need and crave. With the last day of the year passes the earthly life of Mrs. O.O. Norton, a former member of our church from Lodi, who now goes to join the "Church Triumphant in the Better Land." Dear son Horace is now fifty-two years old - would that he were not so silent towards his friends in his native State! Received Post-Card from Rev. and Mrs. Miller, now of Auburn, and wrote to Ada. This year, 1912, has been unique in many ways. My unusual weakness, the homecoming of all the children except Horace and Calvin from the East, and Eunice of those in Cal. our Church Jubilee - so happily celebrated, and the addition to our family of three "little men" - John Willard Thorp, a grandson, and Robert Cornish and Howard Garland Anderson, two great-grandsons, with not one taken from our number by death, and no dreadful accident to any one. Now I seem to be gaining strength slowly but steadily, and so face the New Year wonderingly, but sure that in all ways the dear Father will lead us and care for us, if we but trust Him. So I close this record with the prayer, "Lord, perfect our trust." So, 1912, goodbye! (T.S.R. 39. 2 P.M. 47. S.S. 47.)

1913. Jan. 1. Wednes. "By the good hand of our God upon us," we begin another year - praise be to His name! And He has promised to be "ever with us" - so we have no cause for fear, as we "enter into the cloud" of the future days, weeks and months. The New Year comes in with a foggy morning. Our household now consists of Hannah, Celeste, Theresa, John Willard and myself - the sole occupants of this large house. Nellie, Edw, Bergquest and the little one were our callers, also Bro. Horace. Little Bernice is pretty and improving nicely. Received a letter from Willie, a Post Card from Marie and sent a pkg. to Framingham - to Willie's folks. (T.S.R. 29. 2 P.M. 49. S.S. 48.)

Jan. 3. Friday. Foggy morning. Our Annual Church meeting was held here with a dinner - rather smaller attendance than usual on account of sickness and chilly weather. Meeting was harmonious, and most of the Officers were re-elected, including myself as Treasurer. There was an unusual feeling of sadness, however, because our pastor is leaving us. His luggage had all previously been packed and he said goodbye as soon as the exercises were over, as he goes to his home in Los Angeles to do what he can for his insane wife. So we are now left without a pastor once more. Mrs. Cowdery and Mrs. Hatch came in. Received letter and a book from Will and Ada Cooke. (T.S.R. 27. 2 P.M. 49. S.S. 47.)

Jan. 4. Satur. North windy. Received Post Card from John Bates and wrote to the children in the East. Rev. Dean from San Anselmo has come to fill our pulpit tomorrow and we are entertaining him. He is a youngish man and seems pleasant. (T.S.R. 32. 2 P.M. 42. S.S. 39.)

Jan. 5. Sabbath. Very cold weather, the north wind blowing a gale and the congregations at preaching services small. The S. School was well attended and twenty book prizes were given to those who had faithfully attended through the past year. Only Celeste, Leonard and Corell Smith earned prizes for attendance at church services. The north wind blew so hard and the cold was so intense that there were but six people at church in the evening, but Rev. Dean preached to them just the same. (T.S.R. 22. 2 P.M. 34. S.S. 22.)

Jan. 6. Mond. This morning was the coldest here for years - 20- in the morning and water pipes frozen and bursting all over town. An circle from the faucet in our courtway sink reached to the bottom