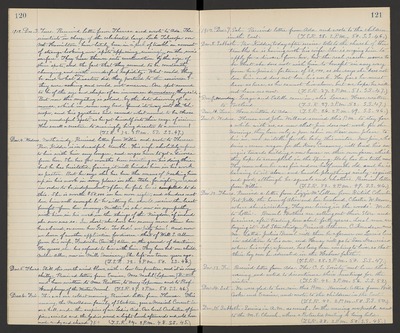 1912. Dec. 3. Tues. Received letter from Theresa and wrote to Ada. The scientists in charge of the celebrated large Lick Telescope on Mt. Hamilton, have been in a "peck of trouble" on account of strange looking men - "spots" appearing, seemingly, on the sun's surface. They have thrown into consternation by the size of these "spots," and the fact that they seemed to be constantly changing, and with wonderful rapidity. What could they be and what dire disasters did they portend to the universe? they were asking and could not answer. One spot seemed to be of the size and shape of an immense dromedary, they said. But now the mystery is solved, by the late discovery of a mouse, which in some way had found its way into the telescope, and his gyrations had caused what seemed to be those very wonderful "spots," as he got himself into their range of vision. How small a creature to seemingly bring disaster to a universe! (T.S.R. 32. 2 P.M. 53. S.S. 47.)

Dec. 4. Wednes. north windy. Received letter from Willie wrote to Theresa. Rev. Kidder is in dreadful trouble. His wife absolutely refuses to live with him any longer, and urges him to get a divorce from her. She has for months been insisting on his doing this, but he has hesitated, fearing it will hinder him in his work as pastor. But he says she has been the means of breaking him up in his work in every place in the State, for eight years, and in order to be independent of her, he feels he is compelled to do this. She is worth $50,000 in her own right, and she does not love him well enough to be willing he should receive the least benefit from her money. Neither is she now in sympathy with him in his work in the things of the kingdom, of indeed she ever was so. In short, she loves her money more than her husband or even her God. Too bad! we pity him! And now we learn of another application for divorce - that of Will S. Allen from his wife, Frederika (Smith) Allen, on the ground of desertion. For years she has refused to live with him. They have but one child, Nellie Allen, now in Mills Seminary. She left our town years ago. (T.S.R. 32. 2 P.M. 50. S.S. 46.)

Dec. 6. Fri. This was our coldest morning. Received letter from Theresa. This evening, the MacAdam family of stockton, gave a Musical Concert in our hall, under the auspices of our Ladies Aid. Our local Orchestra of four pieces assisted and the ladies served a light lunch afterwards and sold homemade candy and cleared $78+ (T.S.R. 24. 2 P.M. 48. S.S. 45.)

Dec. 8. Sabbath. Rev. Kidder, today after service told to the church of the troubles he is having with his wife. She is urging him to apply for a divorce from her, but the real reason seems to be that she does not wish him to benefit in any way from her private fortune of $50,000, as she says she does not love him and does not love his work. He fears he must leave us here, as she cannot live alone, but we hope he will not leave us now. (T.S.R. 27. 2 P.M. 51. S.S. 47.)

Dec. 11. Wednes. Theresa and John Willard arrived this P.M. to stay for a while with us, as now that Jim does not work for the Mornings, they have only a poor cabin on their own place to live in, not suitable for the baby this winter. Now Jim, who drives a cream wagon for the Knox Creamery, will bend his energies towards building a new house on their own farm, which they hope to accomplish in the Spring. Baby has two teeth now. They came when he was five and one half-months old and he is learning to sit alone and handle playthings nicely-is quiet and good, although he squeals and chatters. Received letter from Willie. (T.S.R. 32. 2 P.M. 49. S.S. 46.)

Dec. 12. Thurs. Received a letter from Lizzie McLellan from British Columbia Port Kells, the home of Alice and her husband, Chester W. Moore, where she is visiting. They are living "in the woods." Wrote to Lottie. Bruml Brothers are selling out their Store and business, after trading here about forty years, Local men are buying it. Sol Strowbridge, Prince A. Athearn, C. Knudsen and Mr. Latta. Julius Bruml will then be a farmer on Laura's land in addition to his own, and Henry will go to San Francisco where his wife, a Jewess, has long been wishing to live, so that their boy can be educated in the Hebrew faith. (T.S.R. 28. 2 P.M. 50. S.S. 47.)