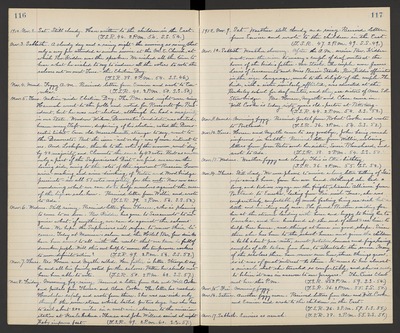 Nov. 3. Sabbath. A cloudy day and a rainy night - the evening so rainy that only a very few attended a union service at the M.E. Church, at which Rev. Kidder was the speaker. We wished all the town to hear waht he wishes to say to induce all the voters to vote the saloons out on next Tues. the Election Day. (T.S.R. 38. 2 P.M. 54. S.S. 46.)

Nov. 5. Tues. Nation-wide Election Day. The P.M. and night were rainy. Hannah went to the polls and voted for Roosevelt for President, but he was not elected, although he had a majority in our State. Woodrow Wilson, Democratic Candidate, was elected, because many Taft men, despairing of his election, voted the Democratic ticket. even old Massachusetts, strange to say, went to the Democrats. But the issue - "wet or dry" - was of more interest to us. And Lockeford, thanks to the votes of the women, went "dry" by 42 majority, and Clements the same by 43 votes. But as we are only a part of the Supervisoral Dist. we find we are on the losing side, owning to the votes of the ignorant Russian German wine-making and wine-drinking, of Victor and Woodbridge precincts - in all 51 votes majority for the wets. Now we are wondering what we can do to help ourselves against the curse of the liquor sale here. Received letter from Willie and wrote to Ada. (T.S.R. 39. 2 P.M. 56. S.S. 52.)

Nov. 6. Wednes. Still rainy. Received letter from Theresa, who is planning to come to us soon. Rev. Kidder has gone to Sacramento to inquire what, if anything, we can do against the saloons here. We hope the Supervisors will refuse to renew their licenses. Today at Maruau's saloon and the Hotel Bar, free drinks have been served to all with the result that our town is full of drunken people. Will this not help to assure the temperance workers to more definite action? (T.S.R. 49. 2 P.M. 52. S.S. 52.)

Nov. 8. Friday. Morning fog - rainy. Received a letter from Ada and Will Cooke and postals from Theresa and Alma Cooke. The letter has reached Honolulu safely and wrote from there. She was sea-sick only through the severe storm which lasted for two days. Now she has to sail about 200 miles in a coast wise steamer to the mission station at Kealakekua. Theresa and John Willard arrived at night. Baby improves fast. (T.S.R. 49. 2 P.M. 60. S.S. 57.)

Nov. 10. Sabbath. Weather showery. After the A.M. service Rev. Kidder went over the river to marry a couple of deaf mutes at the home of the bride's father. Mr. Stacks. The couple were James Lewis of Sacramento and Miss Bessie Stacks. Rev. Kidder officiated in the sign language, much to the delight of the couple. The bride, with a sister similarly afflicted, was educated at the Berkeley school for deaf mutes, and they are sisters of Mrs. Sol Strowbridge. Bro. Horace, Myrtle and Clara came in. Will Cooke is today sixty years old. pastor at Pittsburg. (T.S.R. 44. 2 P.M. 54. S.S. 52.)

Nov. 12. Tues. Horace and Myrtle came to say goodbye, John being much improved in health. Received letter from Willie, enclosing letters from Joan Bates and her sister, Susie Blanhard, and wrote to Ada. (T.S.R. 38. 2 P.M. 54. S.S. 50.)

Nov. 14. Thurs. Still cloudy. We were pleased to receive a long letter telling of Ida's safe arrival home, from her own hand. Although she had a long and tedious voyage on the freight steamer "Alliance" from Portland to Eureka, lasting from Fri. until Tues., she was comparatively comfortable, by much fasting being sea sick but a little and vomiting only once. She found Benton waiting for her at the steamer landing with horse and buggy to bring her to Eureka, and her husband at the end of street-car line to help her home, and things at home in good shape. Since then she has been to the school house and given the children a talk about pea-nuts, sweet potatoes, lemons and figs, having samples of all taken from here, to illustrate the same. Many of the scholars there have never seen how these things grow, so it was of great interest to them. It seems to her almost a miracle that she traveled so comfortably, and she is ready to believe it was in answer to our prayers. The Civics Club met here this P.M. (T.S.R. 45. 2 P.M. 59. S.S. 54.)