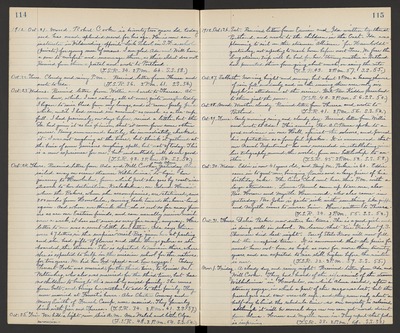 1912. Oct. 21. Mond. Robert Cooke is twenty two years old today and has made splendid record for his age. He is now an instructor in Wildnerding-opposite Lick School in S.F. a school (private) for young men of means. I am glad Ada and will have a son to comfort and encourage them, as their eldest does not. Received from them a postal and wrote to Portland. (T.S.R. 34. 2 P.M. 64. S.S. 58.)

Oct. 23. Wednes. Received letter from Willie and wrote to Theresa. At noon hour, while I was eating, all at once, quite unexpectedly, I began to raise blood from my lungs, and it came freely for a while, until I had raised in amount as much as a tea cup full. I had previously, on days before, raised a little, but the Dr. had given it as his opinion, that it came from some other source. Being summoned hastily, he immediately checked it. I was not coughing at the time, but think it gathered at the time of some previous coughing spell, but not of today. This. is a new experience for me, but undoubtedly will do me good. (T.S.R. 42. 2 P.M. 54. S.S. 50.)

Oct. 24. Thurs. Received letter from Ada and Will Cooke and Alma. Yesterday Alma sailed away on ocean steamer "Wilhelmina," to begin her journey to Honolulu, from which port she goes by coast wise steamer to her destination, Kealakekua, on Island Hawaii where the Bakers, whom she accompanies, are stationed, some 200 miles from Honolulu, coming back towards the home land again. And when we think that she is not so far away from us as are our Eastern friends, and can usually receive mail ones a week, it does not seem so very far away, anyway, Her letter to me was a sweet little love letter. Ada says there were 67 letters in the surprise "Mail Bag" given her at parting and she had gifts of flowers and other things galore as she boarded the steamer. She is expected to remain there, where she is expected to help in the mission school for the natives, for two years. We bid her God speed and bon voyage! Today Forrest Foote was married, for the third time, to Louise M. Waltenberg, who also was married for the third time, but has no children to bring to this much-ly mixed family. She comes from Galt, and brings her mother to add to the family. They were married at Forrest's home. Also Chester Conway and Mary Smith of French Camp, were married. They formerly lived with Jim and Theresa. (T.S.R. 34. 2 P.M. 61. S.S. 57.)

1912. Oct. 26. Sat. Received letter from Eunice and Ida written together at Portland, and wrote to the children in the East. Ida was planning to said on the steamer "Alliance" for Humboldt yesterday, not expecting to reach home before next Tues. We fear the long steamer trip will be bad for her. Stormy weather in Portland had prevented them from going about much or seeing the mts. (T.S.R. 43. 2 P.M. 57. S.S. 55.)

Oct. 29. Tues. Early morning rainy and cloudy day. Received letter from Willie and wrote to Ada. This evening Rev. A.C. Bane spoke to a good audience in our Hall, against the saloons, and proved his reputation as a forceful speaker. It is announced that our Naval Department has now succeeded in establishing wireless telegraphy around the world, from one battleship to another. (T.S.R. 45. 2 P.M. 52. S.S. 52.)

Oct. 30. Wednes. Eddie is now 41years old, and Benj M. Parker is 60. Eddie came in to greet me bringing flowers and a large piece of his birthday cake. The Civics Club met here this P.M. with a large attendance. Laura Bruml came up to see me, also Bro. Horace and Myrtle Hammond, who also came in yesterday. Bro. John is quite sick with something like grippe and Myrtle comes to nurse him. Have written to Theresa. (T.S.R. 34. 2 P.M. 55. S.S. 52.)

Oct. 31. Thurs. Delia parker now enters her "teens". She is a good girl and is doing well in school. We learn that vice President J.S. Sherman died last night. Sec. of State Knox will now fill out the unexpired term. It is announced that the prices for meat have not been so high as now for more than twenty years, and are expected to rise still higher before the winter is over. (T.S.R. 32. 2 P.M. 59. S.S. 55.)

Nov. 1. Friday. A cloudy day and rainy night. Received letter from Ada and Will Cooke. They had heard of the safe arrival of the steamer "Wilhelmina" in Honolulu, on which Alma sailed, after a stormy voyage, in which a part of the cargo was lost, but the passengers and crew were all safe, and they were only about a half day behind the schedule time, so our anxiety is relieved although it will be several days ere we can get word direct from Alma. Horace and Myrtle came in. They report that John is improving. (T.S.R. 38. 2 P.M. 60. S.S. 53.)