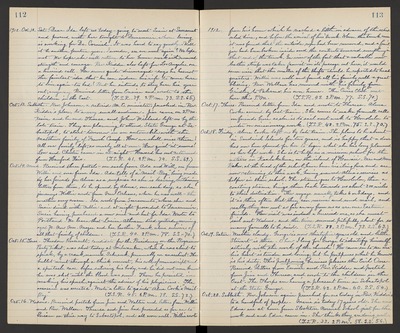 1912. Oct. 12. Sat. Dear Ida left us today-going to meet Susie at Sacramento and proceed with her tonight to Dunsmuir, where Irving is working for Dr. Cornish. It was hard to say goodbye. Will it be another fourteen years, I wonder, ere we meet again? We hope not. We hope she will return to her home work with renewed strength and courage. Rev. Kidder also left for Los Angeles on a hurried call. He seems quite discouraged says he has not the faintest idea that he can induce his wife to come here to live again too bad! But he intends to stay here his year out, anyway. Received letter from Eunice and wrote to the children in the East. (T.S.R. 39. 2 P.M. 73. S.S. 65.)

Oct. 13. Sabbath. Rev. Johnson, a retired M.E. minister, preached in Rev. Kidder's place, to a very small audience. Jim came on 2 P.M. train and he and Theresa and John Willard left us by the late train. They are planning to attend State Grange at Sebastopol, to start tomorrow in an automobile with the Matthews family of French Camp. How we shall miss them! All our family left, so nearly all at once. How quiet it seems! Lou and Chester came in at night. Howard quiet has not returned from Hanford Fair. (T.S.R. 41. 2 P.M. 74. S.S. 69.)

Oct. 14. Mond. Received three postals - one each from Ada and Will, one from Willie and one from Ida. Ada tells of a "Mail Bag" being made by her friends for Alma as a surprise as she is leaving, containing letters from them, to be opened by Alma, one each day, as she journeys. Willie wrote from New Orleans, where he was well - the weather very warm. Ida wrote from Sacramento, where she and Susie dined with Nellie and at night proceeded to Dunsmuir, Susie having purchased a new suit and hat for Ida. Wrote to Portland. We learn that Lucien Athearn died yesterday morning, aged 70. Now Mrs. Magee and her brother Frank alone Survive of all that family of children. (T.S.R. 40. 2 P.M. 78. S.S. 70.)

Oct. 15. Tues. Theodore Roosevelt, Candidate for the Presidency on the Progressive Party ticket, was shot today at Milwaukee, where he was about to speak, by a crank named Schrank, presumably an anarchist. The bullet went through a thick overcoat, his roll of manuscript and a spectacle care before entering his body, and he did not even know he was shot until the blood was seen. Then he persisted in making his speech, against the advice of his physicians. The assassin was arrested. Wrote a letter to go into Alma Cooke's "Mail Bag." (T.S.R. 45. 2 P.M. 78. S.S. 72.)

Oct. 16. Wednes. Received postals from Jim and Walter and letters from Willie and Rev. Wallace. Theresa and Jim had proceeded as far as to Susan on their way to Sebastopol, and all were well. Willie wrote

1912. from his home which he reached a little in advance of the scheduled time, and before the arrival of his trunk. When the trunk came it was found that the outside rope had been removed, and a fruit jar had been broken inside and the contents smeared everything in that end of the trunk. In view of the fact that a valuable new leather strap was taken from it on its passage out here, it would seem wise that the matter of the thefts should be reported to head quarters. Willie was well and found all his family well-a great blessing. Rev. Wallace has removed with his family from Gridley to Palermo, his own home. The "Civics Club" met here this P.M. (T.S.R. 43. 2 P.M. 77. S.S. 70.)

Oct. 17. Thurs. Received letter from Ida and wrote to Theresa. Alma Cooke arrived by last train. She comes to make farewell calls on friends here as she is to sail next week to Honolulu to enter on missionary work. (T.S.R. 42. 2 P.M. 75. S.S. 70.)

Oct. 18. Friday. Alma Cooke left us by late train. She plans to be absent in Sandwich Islands for two years, and is happy that a door has now been opened for her to begin what she has long planned as her life work. She is to help in a mission school for the natives in Kealakekua, on the island of Hawaii. Mr. and Mrs. Baker, at the head of the school, have been visiting here and are now returning to their work, having secured Alma's services as helper in their school. The steamer goes to Honolulu, then a coasting steamer brings then back towards us about 200 miles to their destination. The voyage usually takes 6 or 8 days, and it is thus often that they can receive and send mail, and really they are not so far away from us as are our Eastern friends. Her visit was indeed a hurried one, as she must sail next Wednes. and the time seemed pitifully short for so many farewells to be said. (T.S.R. 78. 2 P.M. 73. S.S. 63.)

Oct. 19. Satur. Weather cloudy. George is now thirtyfive years old and little Stewart is three. O how I long for George to identify himself actively with the work of the church! He came in to see me his heart is tender and loving, but he postpones what he knows is his duty. This postponing business pleases the Evil One. Received letters from Eunice and Rev. Kidder and postal from Jim and Theresa, and wrote to the children in the East. The thorps are having a pleasant time in Sebastopol at the State Grange. (T.S.R. 42. 2 P.M. 60. S.S. 54.)