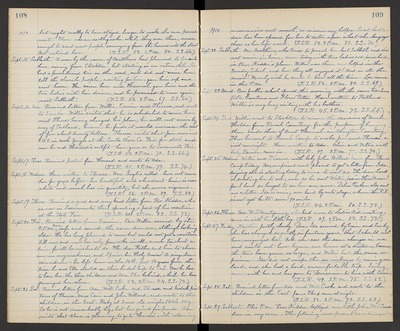 1912. but ought really to have stayed longer to make the cure permanent. There was an earthquake while they were there, severe enough to send most people scurrying from the houses into the street. Not noticed here. (T.S.R. 52. 2 P.M. 80. S.S. 66.)

Sept. 15. Sabbath. A man by the name of Matthews had planned to preach here, coming from Stockton, but starting in an automobile, he had a punctured tire on the road, and did not arrive here till the church people, waiting for him, gave him up and went home. He came here and Hannah gave him and the two ladies with him dinner, and he promised to come again next Sabbath. (T.S.R. 50. 2 P.M. 67. S.S. 60.)

Sept. 16. Mon. Received letters from Willie, Eunice and Theresa, and wrote to Eureka. Willie writes that he is scheduled to arrive here next Thurs. having changed his plan, he will not arrive by way of Portland, because he finds it would increase the cost of fare about twenty dollars. Theresa writes that Jim received $153. in cash prizes at the Santa Clara Co. Fair for stock and now he and Howard's outfit have gone on to Sacramento Fair. (T.S.R. 50. 2 P.M. 70. S.S. 66.)

Sept. 20. Fri. Received letter from Eunice. Our Willie arrived by the 2 P.M. train safe and sound, the same dear son, although looking older. He has long planned to come but could not get a vacation till now, and now has only four wks. in all, much too short a time for all he wishes to do. The dear Father sent him to cheer me in my weakness, and I praise his Holy Name! A singular coincidence - he left home on the 14th, just 14 years from the time he and Etta started on their bridal trip to Cal. Now he has to leave her, the three children and Mrs. Ober behind, while he has journeyed here alone. (T.S.R. 52. 2 P.M. 84. S.S. 72.)

Sept. 21. Sat. Received letters from Ada, Will Cooke and Theresa and kodak pictures of Theresa, Miss Cain and John Willard, and wrote to the children in the East. Baby at 3mos. old weighs 13lbs. 10oz. So he is not remarkably big but has gained five pounds. Ada writes that Alma is planning to go to Hawaii with returning

Sept. 22. Sabbath. Mr. Matthews, who tried to preach here last Sabbath and did not arrive in time, came today with two ladies and preached in Rev. Kidder's place. Willie was there and helped in the Sunday School, and how they all enjoyed it! And in all the music! We only wish he could be here all the time. Lou came in this P.M. (T.S.R. 52. 2 P.M. 80. S.S. 69.)

Sept. 23. Mond. Our public school opened this morning with the same teachers Rolla Garretson and Flores Pattee. Have written to Portland. Willie is very busy visiting with his brothers. (T.S.R. 45. 2 P.M. 73. S.S. 66.)

Sept. 24. Tues. Willie went to Stockton to remove the remains of Uncle Holden from Rural Cemetery, for the purpose of busying them beside those of Aunt Hannah in Abington Cemetery. Then he went to French Camp to make Jim and Theresa a visit overnight. Have written to Ada. Alice and Nellie with baby Bernice, came in (T.S.R. 49. 2 P.M. 77. S.S. 74.)

Sept. 25. Wednes. Willie and Theresa with baby John Willard came from French Camp today. Was surprised and pleased to get a letter from Ida saying she is starting today to come to visit us. The dear Lord is sending her to me, even as he sent Willie, praise His Name! for I have as longed to see her once more. Delia Parker also sent me a letter. Ida is coming over-land by auto stage, where the R.R. is not yet built-some 90 miles. (T.S.R. 46. 2 P.M. 80. S.S. 73.)

Sept. 27. Friday. Weather partly cloudy. Dear Ida arrived by train, and truly she has changed so greatly in fourteen years, that I should not have recognized her. And she sees the same changes in us and would not have known our house at a distance, because the trees have grown so large, and Willie had the same experience. Ida did not escape the sea sickness by coming over land, and she had a hard, uncomfortable trip. Irving came with her and has gone to Dunsmuir to live with Susie. (T.S.R. 49. 2 P.M. 75. S.S. 63.)

Sept. 29. Sabbath. This P.M. Rev. Kidder baptized our little John Willard here in my room. The following were present as witnesses: