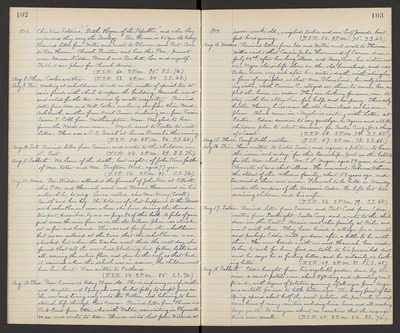 1912. Christian Soldiers," "Battle Hymn of the Republic," and when they adjourned they sang the Doxology. bro. Horace is 65yrs. old today. Received letter from Willie and wrote to Theresa and Post-Card to Bro. Horace. Church Trustees met here this P.M. present were Misses Kidder, Bruml and Burkett, Lou and myself. Talked over plans for Church Annex. (T.S.R. 60. 2 P.M. 95. S.S. 76.)

Aug. 9. Fri. Meeting at schoolhouse to vote on the matter of special tax to raise funds with which to repair the building. Hannah went and voted for the tax carried by small majority. Received letter from Ada and Will Cooke, enclosing one from Alice Ward Ashbrook, another from Aunt Susie, enclosing one from cousin Susan E. Cobb from Northampton, Mass. Was glad to hear from the Wards once more. Myrle went to Exeter to visit Lottie. There was a C.E. Social at Laura Bruml-s this evening (T.S.R. 50. 2 P.M. 80. S.S. 68.)

Aug. 12. Mond. Rev. Kidder attended the funeral of John Rice at Elliott, this P.M. and Hannah went and Winnie Hammond in his automobile, to sing. Laura called, also Mrs. Mary (Corell) Smith and her boy. She told us of what happened to the Brunswick schoolhouse, near where she lives, during the thunder tempest, described by me on page 92 of this look. A field of grain just across the river from us on the old Wilson place was struck, set on fire and burned. This was not far from the schoolhouse but no one noticed at the time that the schoolhouse was shocked, but when the teacher went there the next day, she found that all the over-head plastering had fallen, Laths and all, covering the entire floor, and open to the roof, so that had it occurred when the school was in session, the children must have been hurt. Have written to Portland. (T.S.R. 54. 2 P.M. 85. S.S. 70.)

Aug. 13. Thurs. Dear Eunice is today 38 yrs. old. She is improving as wife, Mother and daughter, and I pray she may be led fully to accept Jesus as "the new and living way" unto the Father, and "believing, to have eternal life through His Name. Received letter from Theresa and Post-Card from Etta, who with Walter, was visiting in Plymouth Mass. and wrote to Ada. There writes that John Willard, at

Aug. 14. Wednes. Received letters from Ida and Willie and wrote to Theresa. Willie writes that Cousin Julia Hammond of Carver died on July 22nd, after her long illness, and Mary Ann, her sister, now over 80yrs. old, is left alone on the old homestead and was taken down very sick after her sister's death, with "Shingles," a form of erysipelas, so that Mrs. Blanchard, her only remaining sister, with Eunice C. stayed on there to nurse her and put the house in order. They are looking for someone to stay with her altogether, for help and Company. Their only brother Henry, lives near the old homestead on his own place. Alma came in Myrle is visiting with Lottie at Exeter. Edna came in to say goodbye, as Agnes and all the children plan to start tomorrow for Santa Cruz, for a change of climate (T.S.R. 48. 2 P.M. 78. S.S. 65.)

Aug. 16. Fri. Have written to Sister Susie, and signed a petition to have the issue," wet or day," for this township, put on the ballot for the Nov. election. Mr. S.L. Magee, aged 89 years, died in Clements, after a short illness. He married Rebecca Athearn the oldest of the Athearn family, about 53 years ago, and has resided there ever since. Funeral to be held on Monday under the auspices of the Masonic Order. He left but two surviving children, and his wife. (T.S.R. 50. 2 P.M. 79. S.S. 68.)

Aug. 17. Satur. Received letter from Eunice and Post-Card from Edna written from Seabright, Santa Cruz, and wrote to the children in the East. Marie met the family at Nile and went with them. They have hired a cottage for a month and perhaps Eddie will go down after a little to be with them. He now boards with us and Hannah has undertaken to cook for him food suitable to his prescribed diet and he says he is feeling better, and he certainly is looking better. (T.S.R. 49. 2 P.M. 81. S.S. 68.)

Aug. 18. Sabbath. Eddie brought from his vegetable garden, down by the river, a sweet potato vine, about 8ft. long and spreading 4 or 5 ft. wide, with dozens of potatoes growing, of all sizes, from large ones suitable for use to little button sizes. The heavy frost of late Spring, spared about half the sweet potatoes, the pea-nuts, turnips corn, beans of many varieties, including lima beans, and all making large growth. So many are absent on vacations that the congregations were small. (T.S.R. 48. 2 P.M. 84. S.S. 74.)