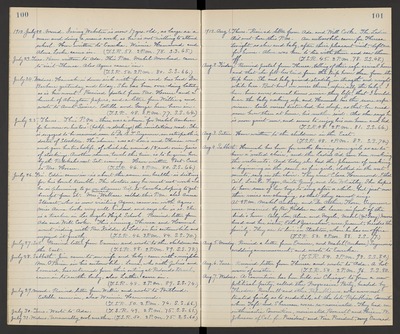 July 24. Wednes. Hannah is down sick with fever and has had Dr. Barbour yesterday and today. She has been over doing lately as is her wont. Received postal from Bro. Horace and a bunch of Abington papers, and a letter from Willie and wrote to Aunt Susie. Estella and George have been in (T.S.R. 48. 2 P.M. 77. S.S. 64.)

July 25. Thurs. This P.M. there was a "shower" for Mabel Ambrose "for her nose or her toes" (hdkfs, or stockings) the invitations read. She is engaged to be married soon to Dr. A.T. Seymour, an osteopathic doctor of Stockton. The "shower" was at Lou's and Theresa went and gave her two hdkfs. of which she received 18, and nine pairs of stockings. Another shower, towels this time, is to be given her by the Rebekahs next Sat. evening. Have written Post-Card to Bro. Horace. (T.S.R. 46. 2 P.M. 80. S.S. 66.)

July 26. Fri. Eddie came in - is about the same in health - is dieting for his bowel trouble. the doctors say he must not work and he is planning to go on steamer trip to eureka, hoping to get benefit from it. Mrs. Minard Wallace called this P.M. also Anna Stewart, who is now visiting Agnes, came in with Agnes. Miss Anna looks very well indeed and says she is so. She is a teacher in Los Angeles High School. Received letter from Ada and Will Cooke. This evening, Theresa and Hannah went riding with Rev. Kidder to Lodi in his automobile and enjoyed it greatly. (T.S.R. 46. 2 P.M. 84. S.S. 70.)

Aug. 2. Friday. Received postal from Theresa, telling of their safe arrival home and that she felt less tired from the trip home than from the trip here. She and baby gained steadily in strength and weight while here. But how we miss them, especially the baby! I have been sure, several times since they left, that I could hear the baby waking up, and Hannah has the same experience. Loud noises disturbed his sleep, so that he cried more here than at home, his mother said. Also she says he is more quiet now, and seems to enjoy his own home and bed (T.S.R. 48. 2 P.M. 81. S.S. 66.)

Aug. 4. Sabbath. Hannah has been for weeks training some girls so as to have a "vested choir," and the Ladies Aid have been making the vestments. And today she had the pleasure of making a beginning in the same, as five girls, clothed in the vestments, sang in the choir. They were Clara Hammond, Ethel coil, Lucile Figge, Anita Young, and Ida Wheatley, She hopes to have some of her boys to sing after a while, but just now their voices are changing, so that they cannot sing. At 2 P.M. Mabel Ambrose and Dr. Arthur Thorn Seyanour were married by Rev. Kidder on the lawn in front of the bride's home. Only Lou, Alma and Myrle, Mabel (McGary) Moore head and her sister, Ethel Yearnshaw, were present, besides the family. They are to live in Stockton, where he has an office. (T.S.R. 52. 2 P.M. 88. S.S. 77.)

Aug. 7. Wednes. A convention has been held in Chicago to form a new political party, called the Progressive Party, headed by Theodore Roosevelt and other Republicans, who were not treated fairly as to credentials, at the late Republican Convention where Taft and Sherman were re-nominated. They had an enthusiastic Convention, nominated Roosevelt and Hiram W. Johnson of Cal. for President and Vice President, sang "Onward