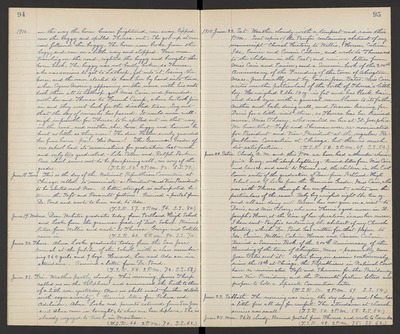 1912. on the way the horse became frightened, ran away, tipped over the buggy and spilled Theresa out. She got up at once and followed the buggy. The horse soon broke from the buggy and ran on a little way and stopped. Four men traveling on the road, righted the buggy and brought the horse back. The buggy was not badly broken, so Theresa, who was anxious to get to Lathrop, go into it, leaving the horse, and the men started to haul her by hand into town, when Cyrus Moreing appearing on the scene with his auto took them all to Lathrop, got Miss Cain, and proceeded with her and Theresa to French Camp, where he took Jim in and they went back for the disabled team. Say not that the day of miracles has passed. It would seem well - nigh impossible for Theresa to be spilled out in that way in the road, and neither she, horse, buggy and harness be hurt so little as they were! The dear Father surely guarded her from harm - praise His Name! The Grammar Grade of our school had its examinations for graduation last week and only two graduated - Lila Patter and Ralph Parker. Our school seems not to be prospering well, in any of the grades. (T.S.R. 50. 2 P.M. 92. S.S. 78.)

June 18. Tues. This is the day of the National Republican Convention at Chicago, called to nominate a President and Vice President to be elected next Nov. A bitter struggle is anticipated between the Taft and Roosevelt factions. Received a postal from Dr. Pond and wrote to him and to Ada. (T.S.R. 57. 2 P.M. 96. S.S. 80.)

June 21. Fri. Weather partly cloudy. This morning James Thorp called us on the telephone and announced the birth to them of a little son, yesterday. Now we shall await further details with eager anxiety. Received letters from Rebecca and Adelaide. Alma Locke and parents returned from San Jose and Alma came in tonight, to show me her diploma. she is already engaged to teach in Manteca. (T.S.R. 46. 2 P.M. 72. S.S. 62.)

1912. June 22. Sat. Weather cloudy with a tempest and rain this P.M. Sent copies of the "Pacific" containing abstract of my manuscript Church History to Willie, Horace, Calvin. Ida, Eunice and Cousin Calvin, and wrote to Theresa and to the children in the East, and received letters from Miss Cain and Eunice, and a Souvenir book of the 200th Anniversary of the Founding of the town of Abington, Mass., presumably sent by Cousin Joan Bates. Miss Cain writes me the particulars of the birth of Theresa's little boy. He weighed 8lbs. 10oz. - is fat and has black hair and dark eyes, with a general resemblance to its father Mother and babe doing well, and Beacon leaving for Davis for a little visit there, as Theresa has her trained nurse, Miss O'Leary, who waited on her at St. Joseph's. We hear that Taft and Sherman were re-nominated for President and Vice-President at the regular Republican Convention at Chicago, but there is much dis-satisfaction. (T.S.R. 50. 2 P.M. 69. S.S. 54.)

June 22. Satur. Cloudy A.M. and this P.M. we have had a thunder shower quite heavy, with sharp lightning. Received letters from Miss Cain and Eunice, and wrote to Theresa and the Children in the East. Eunice writes of the graduation of Dean From Portland High School and of Locke from the Grammar Grade. Miss Cain, who was with Theresa through her confinement, writes me the particulars of the same. Baby boy weighed eight lbs. ten oz. and all are doing well. Beacon has now gone on a visit to Davis, and Miss O'Leary, who was Theresa's good nurse in St. Joseph's Home, at the time of her operation, is now her nurse. I have sent Pacifics containing the abstract of my Church History, which Dr. Pond has written for that paper, to Ida, Eunice, Willie, Calvin, Horace and Cousin Calvin. Received a Souvenir Book of the 200th Anniversary of the Founding of the town of Abington, Mass.- presumably Mrs. Joan Bates send it. After being in session continuously since the 18th at Chicago, the Republicans in National Conv. have re-nominated Taft and Sherman for the Presidency and Vice-Presidency, and the Roosevelt faction bolted and propose to hold a separate Convention later. (T.S.R. 50. 2 P.M. 69. S.S. 54.)