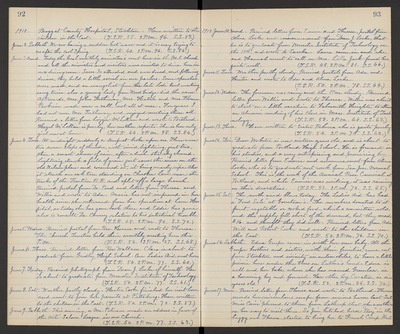 June 3. Mond. Today the local monthly minister's met here in the M.E. Church and all the ministers and visitors were invited to dine here in our dining room. Some 30 attended and were dined, and following dinner, they held a little social in our parlors. Some speeches were made, and an evangelist from the late Lodi tent meeting sang twice, also a young lady from Woodbridge did the same. Afterwards, Mrs. John Tretheway, Mrs. Hatch and Mrs. Florence Parkison made me a call, not all at once. For years I had not seen Mrs. Tretheway, and enjoy meeting them all. Received a letter from Lizzie McLellan and wrote to Portland. Hazel McLellan is poorly, her mother reports. She is her only girl now at home. (T.S.R. 64. 2 P.M. 98. S.S. 84.)

June 4. Tues. At midnight suddenly a tempest broke upon us. There were two severe claps of thunder, with vivid lightning, just two, then a smart shower of rain, after which the sky cleared. Lightning struck a field of grain just across the river on the old Wilson place and consumed it , it bring nearly ripe. Also it struck an oak tree standing on Cherokee Lane near the tracks of the Traction R.R. and split off a large branch. Received postal from Dr. Pond and letters from Theresa and Willie and wrote to Ada. Marie has not improved in her health since she returned from her operation at Lane Hospital, so today she has gone back there and Eddie has gone also to consult Dr. Cheney relative to his intestinal trouble. (T.S.R. 68. 2 P.M. 92. S.S. 72.)

1912. June 10. Mond. Received letters from Eunice and Theresa, portal from Alma Locke and announcement from Dean J. Locke, that he is to graduate from Worcester Institute of Technology on the 13th, and wrote to Eureka. Laura came in and she and Hannah went to call on Mrs. Lilla Jack found her quite well. (T.S.R. 48. 2 P.M. 81. S.S. 66.)

June 12. Wednes. The forenoon was rainy and the P.M. cloudy. Received letter from Willie and wrote to Theresa. Willie was about to start on a little vacation to Falmouth Heights, to attend an Alumni meeting of his Class in Mass. Institute of Technology. (T.S.R. 58. 2 P.M. 68. S.S. 63.)

June 14. Fri. Dean Webster is now sixteen years old, and is about to graduate from Portland High School. He is forward in his studies, and a very enterprising and promising boy. Received letter from Eunice and announcement from Alma Locke, who is to graduate next week from San Jose Normal School. This is the week of the Annual Rose Carnival at Portland, and while Eunice was writing, it was raining on their decorations. (T.S.R. 51. 2 P.M. 72. S.S. 65.)

June 15. Sat. The north wind blows today. The Ladies Aid has had a "Food Sale" at Garretson's. The members donated to it fruit, vegetables or cooked food, which a committee sold and the supply fell short of the demand, but they made $16. and thought they did well. Received letters from Ada Will and Robert Cooke and wrote to the children in the East. (T.S.R. 52. 2 P.M. 76. S.S. 70.)

June 16. Sabbath. Edna Grupe came in with her new baby. All the Grupe brothers and sisters, with their families, came out from Stockton and vicinity in automobiles, to have a little picnic here under the trees on Luther's land. Edna is well and her babe, whom she has named Greenlaw, is a bouncing boy and forward. Her other boy, Carsten, is six years old. (T.S.R. 52. 2 P.M. 86. S.S. 74.)

June 17. Mon. Received letter from Theresa and wrote to Portland. Theresa records her miraculous escape from Serious last Sat. Miss Cain phoned to them from Lathrop that she was there on her way to visit them. So Jim hitched horse "Boy" in the buggy and Theresa started to bring her French Camp. But