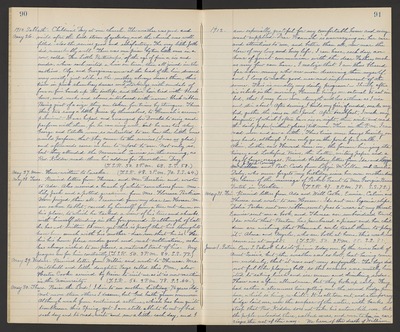 1912. May 26. Sabbath. Children's Day at our church. The weather was good and mild after the hard storm of yesterday, and the church was well filled - also the services good and satisfactory. The very little folks did remarkably well. There was one price by ten little ones in a row, called "Ten Little Buttercups", of the age of five or six and under, where each recited a line in turn, then all joined in the motions. Olga and Georgiana were at the head of the line, dressed very neatly, just alike, as the mother always dresses them, this time in pink shambray dresses and pink stockings, with sandals of four of five bands up the insteps, and their hair tied with black bows, and necks and sleeves interlaced with narrow black ribbon. Being just of a size they are taken for twins by strangers. Then they two sang a little piece by themselves, to Hannah's accompaniment. It was hoped and arranged for Donald to sing and perform with them, for he can sing well, but he was too shy George and Estelle were so interested to see how the little ones would perform, that they came to the services, (I was so glad) and afterwards came in here to report to one. Not only so, but they attended the Memorial Service in the evening, as Rev. Kidder made then his address for Decoration Day. (T.S.R. 50. 2 P.M. 68. S.S. 58.)

May 28. Tues. Received letters from Theresa and Mr. Dustin and wrote to Ada. Also received a bunch of white carnations from Mrs. Lily Jack and a potted geranium from Mrs. Florence Parkison. More prized than all. I received from my dear son Horace M. an oaken tablet, carved by himself from a tree cut down on his place, to which he tacked a view of his trees and shrubs, with himself standing in the foreground. So although of late he has not written to me, yet this is proof that his thoughts have been much with his mother - dear son that he is! He his his home place under good and neat cultivation, as he has always wished to see places, a natural trait of his. My prayers are for him constantly. (T.S.R. 50. 2 P.M. 84. S.S. 73.)

May 29. Wednes. Received letter from Willie and wrote to Theresa. Mrs. Mitchell and little daughter Faye called this P.M., also Hester Cooke arrived by train to visit us, as it is now vacation in the University. (T.S.R. 56. 2 P.M. 78. S.S. 64.)

May 30. Thurs. Praise the Lord! I live to see another birthday - 76 years old. "not more than others I deserve, but God hath given me more". Although weak from continued asthma, which has been quite troublesome this Spring, yet I am still able to be out of bed each day and to read, write and sew a little each day, and I

1912. am especially grateful for my comfortable home and every want supplied. Dear Hannah is unwearying in her care and attentions to me, and better than all, now near the close of my long and busy life, I can have, each day, an hour of quiet communion with the dear Father, such as very few can have. I realize that I am thus blessed far above many who are more deserving than myself, and I long to make good use and improvement of the same. This is usually my daily program:- Shortly after six o'clock in the morning, Hannah brings me oatmeal to eat in bed, that I may have more strength and less asthma as I rise and stir about. After dressing, I build my fire, if needed, make my bed, gather roses on the porch. After breakfast, I make my bouquets, of which I often have six or eight, then write and read the daily paper ( without glasses) till noon. Then in the P.M. I can read more and sew a little. Thus time hangs heavily on my hands, although I can only go on the porch for a walk. Alice, Luther and Howard came in, the former bringing stationery and Lockeford Views, the Latter, writing paper and a bag of large oranges. Received birthday letters from Ida and Susie Cornish and Post-Cards from Lizzie McLellan and Amelia Daley, who never forgets my birthday, since her own mother died. We learn of the marriage of Parker Grant to Mrs. Georgia Brown Dutch in Stockton. (T.S.R. 47. 2 P.M. 78. S.S. 73.)

May 31. Fri. Received letters from Ada and Will Cooke, Eunice, Calvin and Theresa and wrote to son Horace. Ida sent me begonia slips, Delia Parker sent me ribbon sweet peas to wear at my throat, Eunice sent me a book, and Theresa an embroidered towel. Ida writes that Benton has purchased a piano and her children are wishing that Hannah could teach them to play it. Alma and Myrle, who are both at home this week and came in at night. (T.S.R. 50. 2 P.M. 88. S.S. 80.)

June 1. Satur. Our S. School held its picnic today over by the river back of Aunt Susie's, but the weather not very enjoyable. The boys did not feel like playing ball, so the exercises were mostly limited to eating lunch and ice cream and drinking sodas. There was a fine attendance, but they broke up early. They had rather a strenuous time getting over the second bridge from here, which is being re-built. It is all torse out, and a temporary bridge laid over, near the surface of the water, with banks so steep that Rev. Kidder does not take his automobile over, but the people unloaded there, walked across, and were taken in carriages the rest of the way. We learn of the death of William