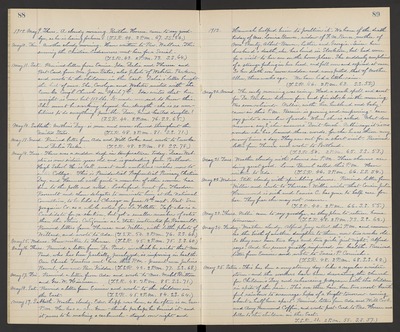 May 11. Sat. Received letters from Eunice. Ida, Delia and Theresa and Post Card from Mrs. Joan Bates, also photo of Webster Parker, and wrote to the children in the East. Delia's letter brought the best of news. She, Carolyn and Webster united with the Eureka Cong'l Church on April 7th. Ida writes that her weight is now but 113lbs. It made me sad to know this. She must be working beyond her strength - she is so ambitious to do everything possible. Dear, kind hearted daughter! (T.S.R. 44. 2 P.M. 76. S.S. 65.)

May 14. Tues. There was a sudden drop in temperature today. Dean Webster is now sixteen years old and is graduating from Portland High School. He is tall, smart and ambitious - wishes now to enter College. This is Presidential Preferential Primary Election Day, and Hannah with quite a number of other women has been to the polls and voted - Lockeford went for Theodore Roosevelt and chose delegates to nominate him at the National Convention, to be held at Chicago on June 18th next. But San Joaquin Co. as a whole voted for La Follette. Taft also is a Candidate for re-election, but got a smaller number of votes than the other. California as a State instructed for Roosevelt. Received letters from Theresa and Willie, with little photo of Willard, and wrote to Ada. (T.S.R. 50. 2 P.M. 76. S.S. 60.)

May 19. Sabbath. Weather cloudy. Edw Lipp was here, as he often is on Sun. P.M. He has a sore knee - thinks perhaps he bruised it and it seems to be making a carbuncle - stayed over night and

1912. Hannah helped him to poulties it. We learn of the death today of Mrs. Louisa Brown, widow of F.M. Brown, mother of Mrs. Prouty, Albert Brown, Luther and Georgia. Since her husband's death, she has lived in Stockton, but had come for a visit to her son on the home place. She suddenly complained of a strange feeling in her head, and fell over and expired at once. So her death was more sudden and unexpected that of Mother Allen, three weeks ago. We have had a little rain. (T.S.R. 46. 2 P.M. 63. S.S. 55.)

May 20. Mond. The early morning was rainy. Had weak spell and sent for Dr. Barbour between four and five o'clock in the morning. Was soon relieved. Nellie, with her husband and baby, came in this P.M. Bernice is growing and improving - can say quite a number of words. When she is asked "What does Mamma say?" she answers "Don't touch". Nellie says it is no wonder she has learned those words, for she hears them very many times a day. They are out for a short visit. Received letter from Theresa and wrote to Portland. (T.S.R. 50. 2 P.M. 65. S.S. 53.)

May 22. Wednes. Still cloudy with sprinkling showers. Received letter from Willie and wrote to Theresa. Willie writes that Cousin Julia Hammond is sick and Eunice C. has gone to help care for her. They fear she may not recover. (T.S.R. 40. 2 P.M. 66. S.S. 55.)

May 24. Friday. Weather cloudy. Alfred Jory called this P.M. and announces the birth of another daughter to them, now two weeks old. So they now have two boys and two girls, "just right", Alfred says. And he seems greatly improved in health. Received letter from Eunice and wrote to Susie P. Cornish. (T.S.R. 48 2 P.M. 68. S.S. 62.)

May 25. Satur. This has been a very stormy day - like a regular winter storm - and the workers have been decorating the church for Children's Day and rehearsing program with the children in spite of the rain. This eve there have been two most beautiful rainbows to encourage hopes of a bright tomorrow - coming about a half hour apart. Received letters from Ada and Will Cooke and Amy Hammond Coffin, and wrote post-card to Bro. Horace and letter to the children in the East. (T.S.R. 51. 2 P.M. 55. S.S. 57.)