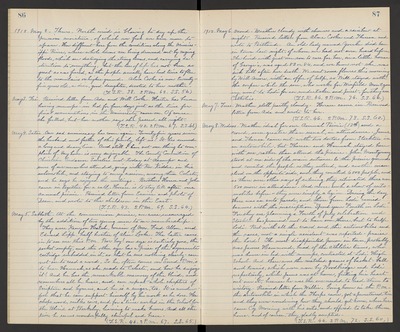 1912. May 2. Thurs. North wind is blowing to dry up the precious moisture, of which we feel we have none to spare. How different here from the conditions along the Missisippi River, where whole towns are being drowned and by raging floods, which are destroying the strong levees, and carrying destruction to everything, but the loss of life has not been so great as was feared, as the people usually have had time to flee to the mountains or higher ground. Alma Cooke is now twenty five years old, and a dear, good daughter, devoted to her mother. (T.S.R. 38. 2 P.M. 62. S.S. 56.)

May 3. Fri. Received letter from Ada and Will Cooke. Hester has been having mumps - in bed for four days just as the time for final examinations in the University came on. Of course. she fretted, but her mother says she passed all night. (T.S.R. 40. 2 P.M. 67. S.S. 61.)

May 4. Satur. Our sad anniversary has come again. Twenty five years since the husband and father of this family left us! It has seemed a long and dreary time. And still I have not one thing to complain of. My home is very enjoyable. The County Convention of Christian Endeavor Societies and today at Acampo and some of our members attended, going with Rev. Kidder in his automobile, and staying to every session, among them Celeste, and he says he enjoyed the meetings. Brothers Horace and John came in together for a call. Horace is to stay till after our annual picnic. Received letter from Eunice and photo of Dean, and wrote to the children in the East. (T.S.R. 43. 2 P.M. 69. S.S. 64.)

May 5. Sabbath. At the communion service, we were encouraged by the addition of two young men to our membership. They were Kenyon Hatch, cousin of Mrs. Fred Allen, and Edward Lipp, half-brother of Alice Locke. The latter came in to see me this P.M. poor boy! one eye is entirely gone, the socket empty, and the other eye has a piece of the dynamite cartridge embedded in it, so that he sees nothing clearly - cannot see to read a word. So he often comes on Sund. P.M.'s to hear Hannah, as she reads to Celeste, and how he enjoys it! and he has the remarkable memory of the blind, and remembers all he hears, and can repeat whole chapters of Scripture and hymns, and he is a singer, too. It is wonderful that he can support himself by his work as he does. He chops wood, milks cows, and for a time worked in the School for the Blind at Berkeley, learning to make brooms. And all the time he seems wonderfully cheerful and brave. (T.S.R. 46. 2 P.M. 67. S.S. 65.)

1912. May 6. Mond. Weather cloudy with showers and a rainbow at night. Received letters from Alma Cooke and Theresa and wrote to Portland. An old lady named Yoerke died here in town last night, of whom we had not even heard before. She lived with just one son to care for her, in a little house of George's, was aged 83 or 84, and we knew not she was sick till after her death. We sent some flowers this morning by Will Moore, with an offer of help, so Will stayed with the corpse while the son, who works for Winfield Montgomery, went to Lodi for an undertaker and priest, for they are Catholics. (T.S.R. 46. 2 P.M. 76. S.S. 66.)

May 8. Wednes. Weather ideal for our Annual Picnic (13th) and a crowd, even greater than usual, in attendance. James and Theresa came out with two doctors from Stockton in an automobile, but Theresa and Hannah stayed here with me, rather than attend the picnic. John Montgomery stood at one side of the main entrance, and another man stood on the opposite side, and they counted 6000 people, and as there were other says of entering, they estimated there were 500 more in attendance. And never such a show of automobiles before - they were simply a legion. During the day there was an auto parade, and those from Lodi carried banners with the inscription "Spend your Fourth in Lodi." For they are planning a Fourth of July celebration and Stockton has promised not to have one there, but to help Lodi. But with all the crowd and the automobile and the races, not a single accident was reported - praise the Lord! The most disappointed person in town, probably, was James Hammond, head of the athletic teams, who was home in bed with mumps, contracted at Lodi High School. And there were the matched games of basket-ball and tennis, which were won by Woodbridge and Lodi respectively, while James was at home, fretting his heart out over it, because he was the one needed to lead them to victory. Received letter from Willie. Going home in the P.M. the automobile in which the Thorps came, got a punctured tire and they were wondering how they should get home, when here came Cy Moreing with his auto, and offered to take them home, and of course, they gladly accepted (T.S.R. 46. 2 P.M. 72. S.S. 60.)