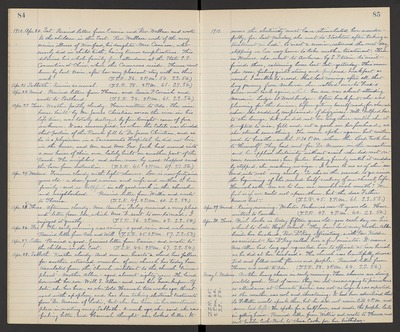 1912. Apr. 20. Sat. Received letters from Eunice and Rev. Wallace and wrote to the children in the East. Rev. Wallace wrote of the very serious illness of Winifred, his daughter - Mrs. Cameron, who nearly died in child-birth, having tumor complication. This detained his whole family from attendance at the State S.S. Convention at Chico, where the Camerons reside. Theresa went home by last train, after her very pleasant stay with us this week. (T.S.R. 36. 2 P.M. 50. S.S. 50.)

Apr. 23. Tues. Weather partly cloudy. Have written to Ada. The nice house built by Mr. James Christian across the river in his life time, was totally destroyed by fire tonight - cause of fire unknown. It was unoccupied, as when the Estate was divided that portion of the Ranch fell to Dr. James Christian, and as he is a physician in a Sacramento Hospital, he did not live in the house, and Mr. and Mrs. Geo. Jack had moved into a new house of their own, lately built on another part of the Ranch. The neighbors and some near-by wood choppers saved the barn from destruction. (T.S.R. 41. 2 P.M. 69. S.S. 56.)

Apr. 24. Wednes. Forenoon cloudy with light showers. Lou is now forty nine years old - a dear, good woamn and wife and mother to her family - and so helpful in all good work in the church and neighborhood. received letter from Willie and wrote to Theresa. (T.S.R. 49. 2 P.M. 60. S.S. 52.)

Apr. 28. Sabbath. Weather cloudy. And over our hearts a cloud has fallen for another esteemed member of our church has today been translated from the "church militant to the church triumphant" - Mother Allen - aged almost eighty years. She lived here with her son - will S. Allen - and was his housekeeper. Of late, she has been, as she told Hannah two weeks ago, threatened with apoplexy, and has been taking electrical treatments from Dr. Mason of Lodi, but she has been in her accustomed place in meeting every Sabbath. A week ago, she said she was feeling better, and Hannah thought she looked better. it

1912 seems electricity must have stimulated her wonderfully, for last monday she went to Stockton after taking a treatment in Lodi, to visit a cousin, returned the next day stopping on her way home to take another treatment. Then on Wednes. she went to Auburn by S.P. train to visit friends there, returning home last Sat - yesterday. This morn she rose, feeling quiet strong and prepared breakfast as usual. I omitted to record that, last evening, after all that long journey from Auburn, she walked over to Fred's house and back again, while her son was absent attending Masonic Lodge at Woodbridge. After breakfast, she was planning for the dinner, before getting herself ready for church when she suddenly complained of dizziness. Will helped her to the lounge, but she did not lie long there until she attempted to rise, fell and cut a gash in her forehead, as she struck something. She never spoke again but continued to breathe until 1:30 P.M. when the Lord took her to Himself. They had sent for Dr. Mason in the meantime and he applied electricity without avail - she did not recover consciousness, her pulse beating firmly until it suddenly stopped, she making no sign. It seems to us as if she "entered into rest" very easily. So she is the second to go since the beginning of the second half century of our church life. Hannah asks, "are we to lose one member each month?" We feel as if we could not spare them, but the dear Father knows best. (T.S.R. 45. 2 P.M. 61. S.S. 55.)

Apr. 30. Tues. Niel Locke is today fifteen years old - goes each day on his wheel to Lodi High School. They have laid away Mother Allen beside her husband, Rev. Dekay officiating, with Rev. Kidder as assistant. Rev. DeKay called here a few minutes. It seems Mrs. Allen had long ago requested him to officiate at her burial as he did at her husband's. The church was beautifully decorated and filled with flowers and people. Received letter from Theresa and wrote to Ada. (T.S.R. 38. 2 P.M. 64. S.S. 56.)

May 1. Wednes. Another heavy shower in early morning. There showers are doing untold good. But of course they are not encouraging to picnickers so attendance at Clements picnic was not as large as was expected as the weather was cool and threatening. It had been advertised that La Folette would speak there, but he did not arrive till 4P.M. and some had left. He spoke for a half hour, and made the people late in getting home. Received letter from Willie and wrote to Theresa and sent Jubilee Cooke-Book to Alma Cooke for her birthday. (T.S.R. 45. 2 P.M. 60. S.S. 50.)