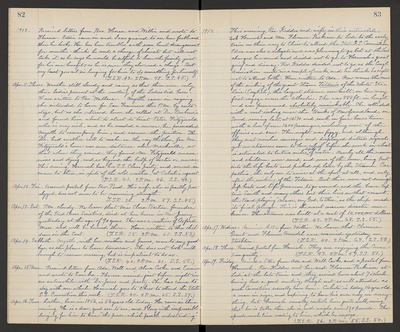 1912. Received letters from Bro. Horace and Willie and wrote to Theresa. Eddie came in and I was grieved to see how feeble and thin he looks. He has been troubled with some bowel derangement for months - thinks he needs a change of climate but will not take it, as he says he would be selfish to leave the family just for his own benefit, as he is sure they also need a change. But my heart goes out in longing for him to do something for himself. (T.S.R. 42. 2 P.M. 48. S.S. 45.)

Apr. 11. Thurs. Weather still cloudy and rainy so that there were only three ladies present at the meeting of the Ladies Aid here. Have written to Rev. Wallace. Myrtle came in saying she intended to leave for San Francisco this P.M. by auto- stage, but as she returned home she called at Dr. Barbour's and found him about to start to treat Peter Fitzgerald who is very sick, and as he needed a nurse, he persuaded Myrtle to accompany him, and assume the position. The Dr. had another call to make on the way thither, for Mr. Fitzgerald's home was some distance above Mackville, so that when they arrived, they found Mr. Fitzgerald unconscious and dying, and so beyond the help of doctor or nurse. This evening, Hannah had her S.S. Class party, and served ice cream to them, in spite of the cold weather, at Celeste's request. (T.S.R. 41. 2 P.M. 46. S.S. 44.)

Apr. 15. Mon. Received letters from Ada, Will and Alma Cooke and Eunice and wrote to Eureka. Theresa arrived just before night in an automobile with Dr. Jones and party. She has come to stay with me while Hannah goes to Chico to attend the State S.S. convention this week. (T.S.R. 40. 2 P.M. 65. S.S. 59.)

Apr. 16. Tues. Luther, born in 1856, is 56 years old today. He came in this evening. He is a dear, good son to me and I long with inexpressible longing for him to know "the peace which passeth understanding."

1912. This morning, Rev. Kidder and wife, in their automobile, took Hannah and Mrs. Florence Parkison to Lodi to the early train on their way to Chico to attend the State S.S. Convention. Edna was also a delegate and was planning to go, but at the last changed her mind and decided not to go, as the Cong'l Association meets in a couple of weeks, and he thinks he ought not to attend both. Have written to Ada. Now comes the news of the sinking of the giant Steamer Titanic of the White Star Line (English), the largest steamer ever built, on her very first voyage across the Atlantic. She was 888ft. in length and was pronounced absolutely unsinkable. She collided with a vast iceberg near the Banks of Newfoundland, on Sund. evening last, at 10:30 and sank in four hours time with a loss of over 1600 passenger, including most of the officers and crew. The night was foggy, and although they sent wireless messages and displayed distress signals yet no steamers came to her relief before she sank in what is estimated to be two miles depth of water. Nearly all the woman and children were saved, and some of the men, being put into the life-boats and picked up later by the Steamer Carpathia, the only one to arrive at the spot at all, and only after the sinking of the Titanic. But there were not enough life boats and life preservers to go around, and the brave Captain Smith and many others lost their lives on that account, the Band playing "nearer, my God, to Thee", as the ship made its final plunge. This is the worst marine disaster ever known. The steamer was built at a cost of 10,000,000 dollars. (T.S.R. 43. 2 P.M. 65. S.S. 55.)

Apr. 19. Friday. Received a letter from Ada and Will Cooke and a postal from Hannah. Rev. Kidder met her and Florence Parkison at Lodi at the late train and they arrived home about 7 o'clock, having had a good meeting, though not so well attended as such Conventions usually have been. Celeste is today 16 yrs. old a man in size, and aspiring to have his own way in everything, but Hannah usually controls him quite well, seeing that he is taller than she is , and weighs some 170 pounds. She spends much time reading to him, which he enjoys. (T.S.R. 36. 2 P.M. 55. S.S. 50.)