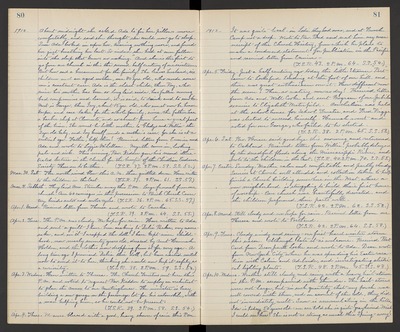 1912. About midnight she asked Ada to fix her pillows more comfortably, and said she thought she could now go to sleep. Soon Ada looked in upon her, hearing nothing more, and found her just breathing her last. So indeed she had at once fallen into "the sleep that knows no waking." And she is the first to go from our Church in this second half century of our existence. But how sad a bereavement for the family! She leaves husband, six children and an aged mother, over 80 yrs. old, who needs some one's constant care. Ada is the eldest child, then Roy, who, since his mother has been so long laid aside, has fallen among bad companions and learned, it is said, to drink and to smoke. Next is George, then Ivy, about 15 yrs. old. who must now be house keeper and care taker for the whole family, since the father has a barber shop at Clements, and so absent from home a great part of the time. She must be little mother to Gladys and Willie the 3yr. old baby, and Ivy herself needs a mother's care, for she is at a critical age. Father, help them! Received letters from Eunice and Ada and wrote to Lizzie McLellan. Myrtle came in, looking pale and sick. this evening, Rev. Kidder gave his second illustrated lecture in the church for the benefit of the Christian Endeavor Society. There are to be three. (T.S.R. 37. 2 P.M. 58. S.S. 52.)

Apr. 2. Tues. The P.M. was cloudy. We hope for rain. Have written to Ada and sent a quilt I have been making to Delia Parker, my name sake, and in it I wrapped the doll I have kept since childhood, now nearly seventy years old, dressed by Aunt Hannah Holden, and the clothes now dropping from it for very age. A long time ago I promised Delia this doll, but have waited until now to send it to her, thinking she would now keep it safely as a curiosity. (T.S.R. 38. 2 P.M. 59. S.S. 52.)

Apr. 3. Wednes. Have written to Theresa. The Church Trustees met here this P.M. and voted to request Rev. Kidder to employ an architect to plan the annex to our meeting house. The minister is busy building a new garage on the parsonage lot for his automobile, with a man helping him, so he could not be present. (T.S.R. 39. 2 P.M. 58. S.S. 54.)

Apr. 4. Thurs. We were blessed with a good, heavy shower of rain this. P.M.

1912. It was quite local - in Lodi they had none, and at French Camp not a drop. Wrote to Rev. Pond and sent him my manuscript of the Church History, from which he plans to make a condensed statement for publication in the Pacific and received letter from Eunice. (T.S.R. 43. 2 P.M. 64. S.S. 54.)

Apr. 5. Friday. Just a half century ago today the little Steamer "Pert" came to Lockeford landing at the foot of our hill, and there was great enthusiasm over it. How different now the scene! Then so watery, now so dry! Received letter from Ada and Will Cooke and sent Program of our Jubilee exercises to Elizabeth Westerfield. An election was held at the school house for School Trustee, and Fred Figge was elected to succeed himself. Hannah went and voted for our George, who failed to be elected. (T.S.R. 38. 2 P.M. 65. S.S. 58.)

Apr. 6. Sat. Bro. Horace said goodbye this morning and returned to Oakland. Received letter from Willie probably delayed by the dreadful floods along the Mississippi River, and wrote to the children in the East. (T.S.R. 40. 2P.M. 70. S.S. 55.)

Apr. 7. Easter Sunday. Weather calm and comfortable and partly cloudy. Services at Church well attended and collection taken to help finish a Church building somewhere in the West, where a new neighborhood is struggling to build their first house of worship. Our church was beautifully decorated, and the children performed their parts well. (T.S.R. 42. 2 P.M. 62. S.S. 52.)

Apr. 9. Tues. Cloudy, windy and rainy - our first hard winter storm this season. Although late it is welcome. Received Post Card from Dean Jewett Locke and wrote to Ada. Dean wrote from New York City where he was spending his Earter vacation with Calvin and Adelaide, and investigating electrical lighting plants. (T.S.R. 48. 2 P.M. 45. S.S. 43.)

Apr. 10. Wednes. Weather still cloudy and rainy with a heavy hail-storm in the P.M. accompanied with thunder. The hail stones were not large, but in such quantity that my porch was well covered with them, and on account of the cold, they did not immediately melt. Snow is accumulating in the hills. Ida is today 50 years old - we are told she is quite gray haired. Wish I could see her! She is not as strong as usual this Spring - sorry!