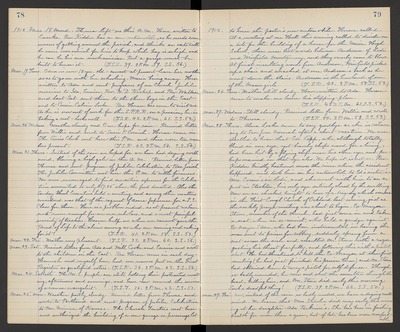 Mar. 21. Thurs. Instead of the rain we hoped for, we have had drying north wind, blowing a high gale in the A.M. Received letter from Theresa and sent program of Jubilee Celebration to Bro. Josiah. The jubilee Committee met here this P.M. to settle finances. We were encourage to find our entire expenses for the Celebration amounted to only $17.25 above the food donated. Also the Sunday School Executive held a meeting, and among other matters considered was that of the request of some Japanese for a S.S. Class for them. Here is a problem indeed, as at present we have not room enough for our own scholars, and a most painful scarcity of teachers. Heaven help us, when we cannot give the Bread of Life to the aliens among us who are coming and asking for it! (T.S.R. 41. 2 P.M. 58. S.S. 53.)

Mar. 23. Sat. Received letters from Ada and Will Cooke and Eunice and wrote to the children in the East. Bro. Horace comes in each day- Hannah and myself have had our names put on the Great Register as qualified voters. (T.S.R. 36. 2 P.M. 63. S.S. 56.)

Mar. 25. Mon. Weather partly cloudy. Received letter from Theresa and wrote to Portland and sent program of Jubilee Celebration to Mr. Minner of Kansas. The Church Trustees met here and authorized the building of a new garage on parsonage lot

1912. to house the pastor's new automobile. Horace called. At a meeting at our Hall this evening called to decide on a site for the building of a house for the Union high School, there were hot words between Anderson of Lodi and Winfield Montgomery, and they nearly came to blows. At final insulting words from Anderson, Winfield picked up a chair and smashed it over Anderson's back as he went down the stairs. Anderson is the husband of one of the Mason girls. (T.S.R. 42. 2 P.M. 58. S.S. 52.)

Mar. 28. Thurs. Alma Locke came to say goodbye as she is returning to San Jose Normal after a short vacation. We were startled to hear that Ed Lipp, who, although totally blind in one eye, yet bravely chops wood for a living, had been hit by a flying chip near his other eye, and perhaps maimed in that eye also. We hope it is not so. Rev. Kidder kindly hastened across the river where the accident happened, and took him in his automobile to Ed's sister's Mrs. Corson's in Lodi, and she went with him to an expert in Stockton, his only eye entirely closed by the swelling. Now we are shocked tonight to hear of a tragedy which occured in the First Cong'l Church of Oakland last evening just as the weekly prayer-meeting was about to begin. Ex-Mayor Stone, member of the church, had just come in and taken a seat, when an ex-convict, who held a grudge against Ex-Mayor Stone, who had been instrumental in having the man sent to prison for robbery, suddenly sprang from a seat across the aisle and assaulted Mr. Stone with a razor gashing his throat fearfully, and following this with a pistol shot. He had threatened to kill the Ex-Mayor at their first meeting ( he had just finished his prison term) and Mr. Stone had obtained leave to carry a pistol for self-defense. Though so badly wounded, he rose and shot the assaulter through the head, killing him, and Mr. Stone died early this morning. Such a dreadful thing! (T.S.R. 39. 2 P.M. 62. S.S. 50.)

Mar. 29. Fri. Now, instead of the rain so badly needed, we have drying north wind. We learn that Mrs. Stemler died very early this morning at her daughter - Ada Parkison's. She has been in failing health for more than a year, but of late has been more comfortable