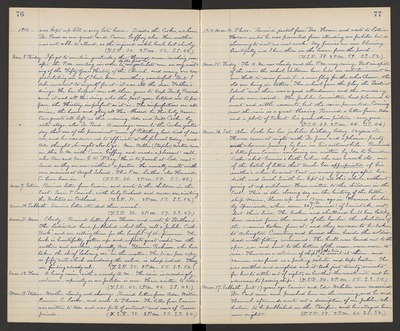 Mar. 8. Friday. I forgot to mention yesterday that Howard came rushing over after the P.M. meeting, in order to be the first to congratulate me on my writing of the Fifty Years History of the Church, and many are congratulating me as if I had done something wonderful. But i take no credit to myself for it - it was all the dear Father's doings. He has helped me all these years to keep Daily Records and it was all His doing, who the past year helped me to prepare the History, imperfect as it is. The imperfections are all mine, the honor and glory all His - blessed be His holy name. Our guest all left us this morning, Ada and Will Cooke by auto-stage, also Dr. Pond. A message came to the Cookes yesterday, that one of the prominent men of Pittsburg had died of cancer, and he was summoned to officiate at the funeral today, and Ada thought she ought also to go. Mrs. Nellie (Staples) Norton came in this A.M. with Carrie Geffroy, and made a pleasant call, also Rev. and Mrs. G.H. DeKay. He is to preach at Lodi next Sund. as they are now without a pastor. he usually meets with our marines at Angel Island. This P.M. Luther, also Howard C. have been in. (T.S.R. 36. 2 P.M. 53. S.S. 48.)

Mar. 11. Mon. Cloudy. Received letter from Theresa and Wrote to Portland. The Ladies Aid have published what they call a "Jubilee Cook- Book", and are selling them for the benefit of the finances. The book is beautifully gotten up and reflects great credit on the authors and workers, especially Mrs. Florence Parkison, who has taken the chief "laboring oar" in the matter. The price per copy is fifty cents, which considering the value, is cheap indeed. They are finding a ready sale. (T.S.R. 35. 2P.M. 55. S.S. 50.)

1912. Mar. 14. Thurs. Received postal from Bro. Horace and wrote to Lottie. Horace writes he was prevented from attending our Jubilee but is planning to visit us next week. My freecias are now blooming beautifully and I have them in the house from the porch. (T.S.R. 38. 2 P.M. 59. S.S. 52.)

Mar. 15. Friday. The A.M. was cloudy and the P.M. very rainy. But in spite of the rain the school children have held an entertainment in our Hall to raise funds for a new flag for the school house, the old one being in tatters. The school gave the play "the District School" and there was a good attendance and the necessary funds were raised. The Jubilee committee had planned to meet and settle accounts, but the rain prevented. Coming now, the rain is a great blessing. Received a letter from Ada and a photo of Robert. his graduation picture - very good. (T.S.R. 43. 2 P.M. 46. S.S. 46.)

Mar. 16. Sat. Alice Locke has her Jubilee birthday today - 50 years old. Theresa came at night with Dr. Jones and a pleasure party who were passing by here in his automobile. Received a letter from Eunice enclosing one written by Ida to Grandma Locke about Eunice's birth, when she was a week old, one of the batch of letters that Uncle Geo. appropriated of his mother's, when he went East so many years ago after her death, and Sarah Smith has kept it all this while, without giving it up until now. Have written to the children in the East. This is the closing day in the history of the battleship maine, blown up some 13 yrs ago in Havana harbor by Spaniards, when some 267 U.S. marines (if I mistake not) lost their lives. The broken and shattered hull has lately been raised from the mud of the harbor, the skeletons of the marines taken from it, and they are now to be taken to Arlington Cemetery and buried there beside the soldier death with fitting ceremonies. The hull was towed out to the open sea and sent to the bottom of the ocean, never more to rise. There was a retinue of ships of the line to escort it there, and cannon was fired as a parting salute, and taps beaten. She was fired as a parting salute, and taps beaten. She was scuttled and weighted and it took just twenty minutes for her to settle out of sight, so low that the wreck will not be a menace to passing ships. (T.S.R. 34. 2 P.M. 55. S.S. 50.)

Mar. 17. Sabbath. Just 17 years ago Eunice and Edw. Webster were married. Dr. Pond came and preached here in the evening and he and Hannah afterwards wrote out a description of our jubilee celebration to be published in the Pacific, and he stayed here over night. (T.S.R. 33. 2 P.M. 60. S.S. 54.)