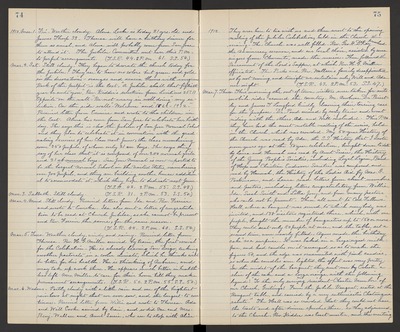 Mar. 2. Sat. Still cloudy. They began to decorate the church today for the Jubilee. They are to have no colors but green and gold in the decorations - oranges and acacia blooms with evergreens. Back of the pulpit is the text - "A Jubilee shall that fiftieth year be unto you," Rev. Kidder's selection from Leviticus 25:11 Opposite on the wall-"Be not weary in well doing"- my selection. On the side walls-"Welcome" and "1862-1912." Received letter from Eunice and wrote to the children in the East. Alma has come from San Jose to celebrate her birthday. She says this is also the Jubilee of San Jose Normal School and they plan to celebrate it in connection with the graduating exercises of her Class next June, the class numbering some 250 pupils, of whom only 21 are boys. She says they say of her class that it is composed of over 200 normal girls and 21 ab-normal boys. San Jose Normal is now reported to be the largest Normal School in the United States, numbering over 900 pupils, and they are building another house additional to accommodate it, which they hope to dedicate next June. (T.S.R. 42. 2 P.M. 55. S.S. 48.)

Mar. 4. Mond. Still cloudy. Received letters from Ida and Rev. Ferrier and wrote to Eureka. Ida also sent a letter of congratulation to be read at Church Jubilee, as she cannot be present and Rev. Ferrier the same, for the same reason. (T.S.R. 44. 2 P.M. 60. S. S. 54.)

Mar. 5. Tues. Weather cloudy, windy and rainy. Received letter from Theresa. Rev. H. G. Miller arrived by train, the first arrival for the Celebration - He is already leaving San Diego, seeking another pastorate in a cooler climate, which he thinks will be better for his health. He is thinking of Auburn, and may take up work there. He appears much better in health has left Mrs. Miller to care for their home till they make permanent arrangements. (T.S.R. 50. 2 P.M. 55. S.S. 50.)

Mar. 6. Wednes. Partly cloudy with a little rain and one of the hightest rainbows at night that we ever saw, and the longest to continue. Received letter from Willie and wrote to Theresa. Ada and Will Cooke arrive by train, and so did Mr. and Mrs. Benj. Wallace and Aunt Susie, who are to stop with Alice.

1912. They were here to tea with us and then went to the opening meeting of the Jubilee Celebration, held in the Church this evening. The Church was well filled. Rev. Geo. H. DeKay preached the Anniversary sermon, and our local choir, assisted by some singers from Clements, made the music. Then followed the Sacrament of the Lord's Supper, at which Rev. H. G. Miller officiated. The Perks and Rev. Wallace's family disappointed us by not coming, and tonight we entertain only Will and Ada over night. (T.S.R. 43. 2 P.M. 53. S.S. 47.)

Mar. 7. Thurs. This morning the out of town visitors were taken for automobile rides around the country. Mr. Ambrose, Dr. Priestley and James T. Langford kindly loaning their touring cars for the purpose. Dr. Pond arrive by early train and went riding with the others, Ada and Will included. This P.M. they have had the most notable meeting of the series, held in the Church which was crowded. My 50-years History of the Church was read by Ada, the S.S. History that I wrote seven years ago at the 50 year celebration, brought down to date by Laura and Hannah was read by Aunt Susie, the History of the Young People's Sociaties, including Loyal Legion Band of Hope and Christian Endeavor Societies was composed and read by Hannah, the History of the Ladies Aid by Mrs. G. Parkinson, and Laura read letters from absent members and pastors, including letters congratulatory from Willie, Ida, Sarah Smith and Lilla Jory, and from many pastors who could not be present. Then all went to Odd Fellows' Hall, where a banquet was served, to which everybody was invited, and 138 visitors registered there, which, with our people, brought the number of bauqueters up to 150 or more. They could seat only 80 people at once, and the tables, set a second time, were nearly filled. Agnes made the "birthday cake" as a surprise. It was baked in a large-sized milk-pan, and had candles on it arranged so as to make the figures 50, and the edge was ornamented with pink candies, so when the candles were lighted, the effect was very pretty- In the midst of the banquet, they sent me by Celeste, a slice of the cake and a large orange, with the following legend: "To the only surviving resident Charter Member of our Church, Geetings: From the Jubilee Banquet, seated at the Banquet table, and carried by a very enthusiastic Chatanqua salute". The Hall was so crowded that they could not have the toasts and after-dinner speeches there, so they adjourned to the Church. Rev. Kidder was toast-master, and the meeting