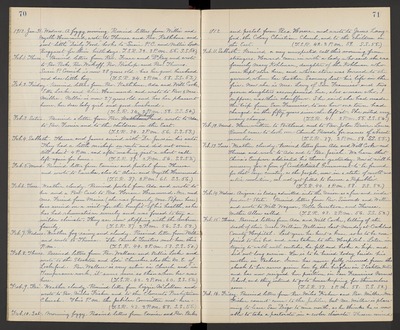 Feb. 6. Tues. Weather cloudy. Received postal from Ada and wrote to her and a Post-Card to Bro. Horace Hammond. Mr. and Mrs. Friend from Maine (she was formerly Mrs. Piper here) have arrived on a visit for the benefit of his health, as he has had rheumatism severely and was forced to try a milder climate. They are now stopping with the Ambrose family. (T.S.R. 37. 2 P.M. 56. S.S. 52.)

Feb. 8. Thurs. Received letters from Rev. Wallace and Nellie Locke and wrote to the Stockton and Lodi Churches, also the M.E. of Lockeford. Rev. Wallace is very active in Church and in Temperance work, it seems more so than when he was here. (T.S.R. 42. 2 P.M. 60. S.S. 56.)

Feb. 11. Sabbath. Received a very unexpected call this morning from strangers. Howard came in with a lady who said she was formerly Mary Kohlman, daughter of the Kohlman who once kept store here, and whose store was burned to the ground, when her brother Sammy lost his life in the fire. Now she is Mrs. Levy of San Francisco and two grown daughters accompanied her, also a man who. I suppose, was their chauffeur. She said she had made the trip from San Francisco, to see how our town had changed in the fifty years since she left it. She noted very many changes. (T.S.R. 41. 2 P.M. 55. S.S. 54.)

Feb. 13. Tues. Weather cloudy. Received letters from Ada and Will Cooke and Theresa and wrote to Ada and to Bro. Josiah. We learn that China's Emperor abdicated his throne yesterday. Now it will be necessary for a form of Constitutional Government to be formed for that large country, as the people, now in a state of revolt and active revolution, are not yet fitted to become a Republic. (T.S.R. 44. 2 P.M. 58. S.S. 52.)

Feb. 14. Wednes. Arizona is today admitted into the Union as a free and independent State. Received letters from Rev. Simonds and Willie and wrote to Will Wagner, Rolla Garretson and Theresa. Mother Allen called. (T.S.R. 43. 2 P.M. 56. S.S. 52.)

Feb. 15. Thurs. Received letters from Ada and Will Cooke, telling of the death of their Uncle William Williams last Monday at Oakland County Hospital. Last year he hurt a knee so as to be confined to his bed and was taken to the Hospital. Later, in trying to walk with crutches, he fell and broke a hip, and did not long survive. He is to be buried today beside his mother in Pacheco. Irene has never fully recovered from the shock to her nerves given her by the burglar in Stockton Hotel and has now resigned her position in San Francisco Normal School, and they intend to go to housekeeping for themselves soon. (T.S.R. 37. 2 P.M. 58. S.S. 54.)

Feb. 16. Friday. Received letters from Rev. Miles Fisher and Rev. Miller. Mr. Fisher cannot come to the Jubilee, but Mr. Miller is planning to leave San Diego to come north, as he thinks he is now able to take a pastorate in a cooler climate. Theresa arrives