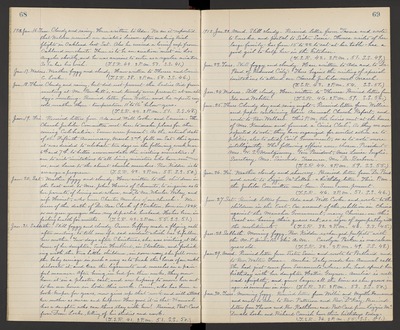 1912. Jan. 16. Tues. Cloudy and rainy. Have written to Ada. We see it reported that Weldon received an aviator's license after making trial flights in Oakland last Sat. Also he received a loving cup from Oakland merchants. These is to be an aviation "meet" in Los Angeles shortly, and he was anxious to enter as a regular aviator. So he has his wish. (T.S.R. 44. 2 P.M. 53. S.S. 41.)

Jan. 19. Fri. Received letters from Ada and Will Cooke and Eunice. The Church Jubilee Committee met here to make plans for the coming Celebration. Seven were present. As the actual date of the Fiftieth Anniversary, March 2nd, falls on Sat. this year it was decided to celebrate two days in the following week, Mar. 6th and 7th, to better accommodate the visiting ministers. I am to write invitations to all living ministers who have ever served us, and Laura to the absent church members. Rev. Kidder is to arrange a program. (T.S.R. 42. 2 P.M. 55. S.S. 50.)

Jan. 20. Sat. Weather foggy and cloudy. Have written to the children in the East and to Mrs. John Harris of Clements, to inquire as to her parents, if living and where, and as to Mr. Wheeler Wiley and wife Harriet, who were Charter Members of our Church. We learn of the death of Dr. Asa Clark of Stockton, born in 1824, so one year younger than my departed husband. He has been in failing health for months. (T.S.R. 42. 2 P.M. 55. S.S. 51.)

Jan. 21. Sabbath. Still foggy and cloudy. Carrie Geffroy made a flying call after meeting, to tell me of a sad accident which has befallen her mother. Two days after Christmas, she was visiting at the home of her daughter, Susie Hubbard, in Stockton, and frolicking with the two little children, in some way she fell over the baby carriage in such a way as to break the bones of an ankle dislocate it, and tear the ligaments and muscles in a painful manner. After being in bed for three weeks, they now have it in a plaster cast, and are hoping to move her out to her own house in Lodi this week. Carrie, who had been a book-keeper for years, now gives up that work and will attend her mother as nurse and helper. How good it is that Hannah has a daughter who can thus stay with her! Received Post-Card from Dean Locke, telling of his studies and work. (T.S.R. 41. 2 P.M. 51. S.S. 50.)

Jan. 25. Thurs. Cloudy day and rainy night. Received letter from Willie and paper containing their Annual Church Report, and wrote to Rev. Wallace. This P.M. the ladies met at the house of Mrs. Knudsen and formed a "Civics Club". As they are now expected to vote, they have organized for united action as to politics, also to study Civil Government, so as to vote more intelligently. The following officers were chosen. President - Mrs. W.S. Montgomery. Vice President, Miss Louise Inglis. Secretary, Mrs. Simonds - Treasurer. Mrs. Dr. Barbour. (T.S.R. 44 2 P.M. 59. S.S. 55.)

Jan. 27. Sat. Received letters from Ada and Will Cooke and wrote to the children in the East. On account of the rebellion in China against the Manchu Government, many Chinese on this Coast are having their queus cut, as a sign of sympathy with the revolutionists. (T.S.R. 38. 2 P.M. 46. S.S. 45.)

Jan. 29. Mond. Received letter from Sister Susie and wrote to Portland and to Rev. Walter Frear - Amelia Daley made her Annual call. She had just come from Sacramento where she had spent her birthday with her daughter Hattie Gaynor. Amelia is well and sprightly, and grows longer all the time as she grows in age - is emmense in size. (T.S.R. 35. 2 P.M. 53. S.S. 50.)