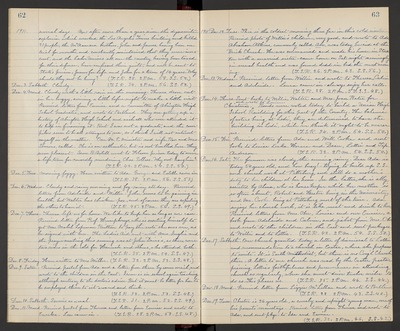 1911. several days. Now after more than a year since the dynamite explosion which wrecked the Los Angeles Times building and killed 21 people, the McNamara brothers, John and James, having been on trial for months, and constantly maintained that they were innocent, and the Labor Unions all over the country having been taxed for their defense, have confessed their guilt, and will be sent to State's prison, James for life and John for a term of 14 years. Why should they not be hung? (T.S.R. 28. 2 P.M. 58. S.S. 52.)

Dec. 4. Mond. Cloudy with a little rain in the morning. Theresa drove out in her buggy, arriving a little before night to make a little visit. Received letters from Eunice and a committee of Abington High School Graduates, and wrote to Portland. They are getting up a history of Abington High School and wish all whoever attended it to help in financing it. But I was not a graduate, and the compilers seem to be all strangers to me, so I think I will not interest myself in the matter. Our M.E. Minister and wife, Rev. and Mrs. Simons, called. She is an asthmatic, but is not troubled here. They seem pleasant. Sam. B. Axtell went to Folsom prison today to serve a life term for cowardly murdering Chas. Sollars. Why not hang him? (T.S.R. 42. 2 P.M. 54. S.S. 50.)

Dec. 6. Wednes. Cloudy and rainy morning and fog-rainy all day. Received letters from Adelaide and Willie. John seems to be gaining in health, but Walter has chicken-pox, and of course they are expecting the others to have it. (T.S.R. 45. 2 P.M. 56. S.S. 49.)

Dec. 7. Theresa left us for home. We like to keep her as long as we can. Received letter from Prof. Humphreys, who is exerting himself to get Mrs. Mabel Lopeman Britton to pay the note she owes me, as he signed with her. The Ladies Aid met with Mrs. Inglis and the prayer meeting this evening was at John Davis's, so there were two rides in the cold for Hannah and others, who attended both. (T.S.R. 35. 2 P.M. 54. S.S. 47.)

Dec. 9. Satur. Received postal from Ada and a letter from them by some mail, and wrote to the children in the East. Irene is in school again teaching although contrary to the doctor's advice. But it must be better for her to be employed than to sit around and think. (T.S.R. 32. 2 P.M. 52. S.S. 48.)

1911. Dec. 12. Tues. This is the coldest morning thus far in this cold winter. Received photo of Willie's children, very good, and wrote to Ada. Abraham Atkins, commonly called Abe, was today buried at the Brick Church - He was unmarried and made his home in Stockton with a married sister-came home on Sat. night seemingly in usual health and was found dead in bed the next morning. (T.S.R. 26. 2 P.M. 63. S.S. 56.)

Dec. 14. Thurs. Sent books to Willie, Walter and Mrs. Joan Bates for Christmas and wrote to Louise. Bonds were voted today to build a Union High School Building for this part of the County. The balance of voters being at Lodi, they are determined to have the building in Lodi, while we think it ought to be nearer us. (T.S.R. 34. 2 P.M. 54. S.S. 50.)

Dec. 16. Sat. The forenoon was cloudy, the evening rainy. Dear Ada is today 54 years old, and how busy! - trying to build up S.S. and church work at Pittsburg and still do a mother's duty to her children at her home. In the latter, she is ably assisted by Alma, who is housekeeper while her mother is so often absent, Robert and Hester being in the University, and Mr. Cooke being at Pittsburg most of the time. Ada enjoys her church work, it is like meat and drink to her. Received letters from Mrs. Ober, Louise and our Eunice, a book from Adelaide and Calvin, and jabot from Mrs. Ober and wrote to the children in the East and sent packages to Willie and to Lottie. (T.S.R. 42. 2 P.M. 54. S.S. 50.)

Dec. 17. Sabbath. Our church granted today a letter of dismissal to Lottie and recommendation to a church in Exeter, where she proposes to unite. It is South Methodist, but there is no Cong'l Church there. A letter to our church was read by the Exerter pastor praising Lottie's faithfulness and perseverance in attending church so regularly, when she must drive twelve miles to do so. This pleases us. (T.S.R. 35. 2 P.M. 46. S.S. 44.)