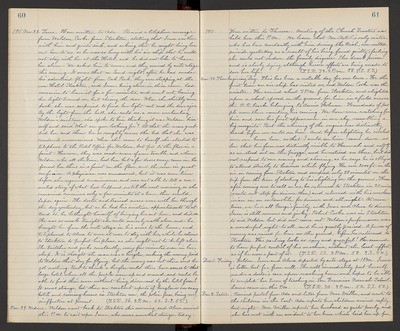 1911. Nov. 28. Tues. Have written to Ada. Received a telephone message from Weldon Cooke from Stockton, stating that Irene was there with him and quite sick, and asking that he might bring her out here to us, as he was so busy with his air-ship that he could not stay with her at the Hotel, and he did not like to leave her alone. We asked him to come, and they arrived by auto-stage this evening. It seems that on Sund. night, after he had made his advertised flight from Oak Park, they were stopping at the new Hotel Stockton, and Irene, being alone in their room, had occasion to leave it for a few minutes, and went out, leaving her light turned on, but closing the door. When she shortly came back, she was surprised to find her light out and the door ajar. By the light from the hall, she could see a man overhauling Weldon's suitcase, she spoke to him thinking it was Weldon himself and said "What are you looking for?" At that the man grabbed her and threw her so roughly across the bed that she was rendered unconscious. When she came to herself she started to telephone to the Hotel Office for Weldon, but fell to the floor in a faint. However, they were made aware of some trouble, and when Weldon, who, all the time. had been but a few doors away, came in, he found her thus in faint on the floor, and the room in great confusion. A physician was summoned, but it was some time before she regained consciousness, and was not able to tell a connected story of what had happened until the next morning, as she remained conscious only a few minutes at a time then would lapse again. The doctor and trained nurse were with her through the day yesterday, but as he had his aviation appointments to attend to, he bethought himself of bringing her out here, and did so. She was so weak tonight she could scarcely walk alone, and he brought her from the auto-stage in his arms to the house, and telephoned to Alma to come at once to stay with her, while he returns to Stockton to perfect his plans, as she ought not to be left alone. She twitches and jerks constantly, every few minutes, even in her sleep. It is thought the man was burglar, seeking the money paid to Weldon that day for flying, but the money was not there and he got nothing. But to think a burglar could thus have access to that large hotel, when all the people were up and around, and could be able to find their room without being discovered by the hotel force! It seems strange, but there are constant reports of burglaries in many hotels and rooming-houses in Stockton now, the police force being very ineffective at present. (T.S.R. 36. 2 P.M. 62. S.S. 55.)

Nov. 29. Wednes. Weldon went back to Stockton this morning and Alma arrived this P.M. to wait upon Irene, who seems somewhat stronger today.

1911. Have written to Theresa. Meeting of the Church Trustees was held here this P.M. We learn that Mr. Axtell's only sister. who has been constantly with him during the trial, committed suicide yesterday as a result of his being found guilty, feeling she could not endure the family disgrace. She drank poison and is slowly dying although heroic efforts are being made to save her life. (T.S.R. 32. 2 P.M. 58. S.S. 53.)

Nov. 30. Thanksgiving Day. This has been a notable day for our town. For the first time an air-ship has visited us, and Weldon Cooke was the aviator. He arrived about 3 P.M. from Stockton and alighted upon a sheet spread on the ground for him in a field across the R.R. tracks, belonging to Annie Holman. Hundreds of people were there awaiting his coming. We here were watching for him and saw his first appearance in our sky, resembling a big mosquito. But the whirring of the engine was distinctly heard before we could see him. And before alighting he circled over our house here, so that I could see him came down so low that his form was distinctly visible to Hannah and myself as we stood out on the piazza, and he noticed us there, but did not respond to our waving and cheering, as he says he is obliged to attend strictly to business while flying. He rose 2000 ft. in the air in coming from Stockton and occupied only 28 minutes on the trip from the time of starting to his alighting on the ground. Then after coming over to call on us, he returned to Stockton in 20 min. (would not stop for dinner then) and returned with his mechanician in an automobile for dinner and all night. At noontime, we had all George's family, with Irene and Alma to dinner. Irene is still nervous and Jerky. Robert Cooke was in Stockton to aid Weldon but did not come out. Weldon's performance was a wonderful sight to all, and he is greatly praised. A purse of money was raised for him on the ground, before he returned to Stockton. His sailing looks, as easy and graceful! He seemed to have perfect control of his machine, without the least effort, as if he were a part of it. (T.S.R. 33. 2 P.M. 58. S.S. 54.)

Dec. 1. Friday. Weldon, Irene and Alma departed by auto-stage at 1 P.M. Irene is better, but far from well. She will immediately put herself under a doctor's care upon reaching home, and hopes to be able to complete her term of teaching in San Francisco Normal School. Laura came in this P.M. (T.S.R. 30. 2 P.M. 56. S.S. 52.)

Dec. 2. Satur. Received postal from Ada and letter from Mrs. Miller, and wrote to the children in the East. Ada reports her children arrived safely last night. Mrs. Miller reports her husband as quite poorly and she has met with an accident to her knee which laid her up for