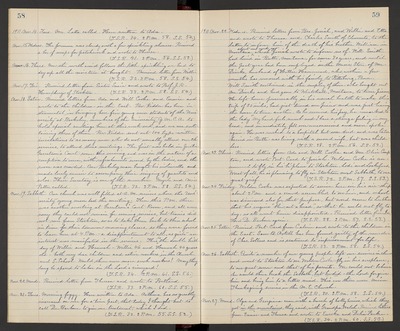 Nov. 18. Satur. Received letters from Ada and Will Cooke and Eunice and wrote to the children in the East. Rev. Kidder has been instrumental in bringing here five young men students of the University at Berkeley, members of the University Y.M.C.A. to hold special meetings here at this week-end, and we are entertaining three of them. Rev. Kidder sent out 100 type-written invitations to as many men who do not usually attend our Ch. services, to attend these meetings. The first was held in Justice Garretson's Court-room this evening and was in the nature of a reception to men, with refreshments served by the ladies, and the room was crowded. One Berkeley man brought his violincello and made lovely music to accompany their singing of quartets and solos. Their Secretary is one of the number. Myrle and Miss Pattes called. (T.S.R. 32. 2 P.M. 58. S.S. 54.)

Nov. 19. Sabbath. Our church was well filled at A.M. services where the University young men led the meeting. Then this P.M. there was another meeting at Garretson's Court-Room, and all were sorry they could not remain for evening services, but trains did not run from Stockton, so us to take them back to their school in time for their tomorrow morning classes, so they were forced to leave here at 4 P.M.- a disappointment to all, as quite an interest was manifested in the services. This is the double birthday of Willie and Hannah - Willie 46 and Hannah 44 years old - both very dear children and active workers in the Church and S. School. Would there were more such workers! May they long be spared to labor in the Lord's vineyard! (T.S.R. 34. 2 P.M. 61. S.S. 56.)

1911. Nov. 22. Wednes. Received letters from Bro. Josiah, and Willie and Etta and wrote to Theresa and Charles Smith of Clements, to the latter to inform him of the death of his brother William in Montana about one week ago, which Josiah wrote to inform us of Will Smith had lived in Butte, Montana, for some 30 years, and until the past year had been employed in the Music Store of Mr. Dierks, husband of Hattie Hammond, who, within a few months has removed with his family to Pittsburg, Penn. Will Smith continued in the employ of those who bought out Mr. Dierks and had gone to Whitehall, Montana, to tune pianos He left home presumably in his usual health to make this trip of 25 miles, had just tuned one piano and was just leaving the house to tune another. As he received his pay, he remarked to the Lady "My hand feels numb and I have a strange feeling in my head", and immediately fell over unconscious and never spoke again - He was rushed to a hospital but soon died and was later buried in Butte - was living with a second wife, but was childless. (T.S.R. 28. 2 P.M. 56. S.S. 52.)

Nov. 23. Thurs. Received letters from Ada and Will Cooke and Mrs. Olive Campton, and wrote Port-Card to Josiah. Weldon Cooke is announced to fly in his bi-plane to Stockton, Lodi and Lockeford. Worst of all, he is planning to fly in Stockton next Sabbath, to our great grief. (T.S.R. 32. 2 P.M. 57. S.S. 53.)

Nov. 24. Friday. Weldon Cooke was expected to arrive here in his air-ship about 2 P.M. and a crowd assembled to see him, and school was dismissed also for that purpose, but word came to Luther that his engine "blew-out a head", so that he could not fly today, so all went home disappointed. Received letter from Ida. Head Dr. Barbour again. (T.S.R. 28. 2 P.M. 57. S.S. 53.)

Nov. 26. Sabbath. Quite a number of our young people left our services in church and went to Stockton to see Weldon Cooke fly in his aeroplane, to our great sorrow and that of his parents. We could not believe he would thus break the Sabbath, but he did - the Lord forgive him and bring him to a better mind. This eve there were Union Thanksgiving services in the M.E. Church. (T.S.R. 30. 2 P.M. 58. S.S. 54.)

Nov. 27. Mond. Olga and Georgiana came with a banch of holly berries, which they got in the mountains, they said, with Grandpa Walsh. Received letters from Eunice and Theresa and wrote to Eureka and Delia Parker. (T.S.R. 34. 2 P.M. 60. S.S. 55.)