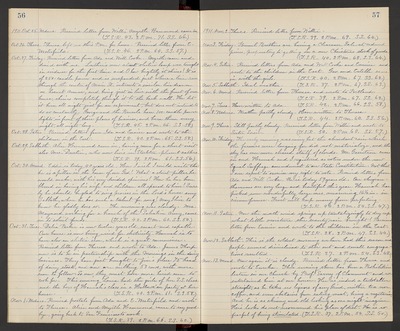 Oct. 27. Friday. Received letters from Ada and Will Cooke. Myrtle came and dined with us. Luther's new street electric lamp was tonight in evidence for the time and O how brightly it shines! It is of 250-candle power and is suspended just where a line run through the center of Main St. intersects a similar line drawn on Locust Avenue, and being just in line with the front of our house, shines completely through it to the back wall. He let it burn all night just for an experiment, but does not intend to do so constantly. George and the Brumls have 100-candle power lights in front of their place of business, and burn them every night, all night long. (T.S.R. 45. 2 P.M. 66. S.S. 58.)

Oct. 30. Mond. Eddie is today 40 years old. How I wish I could write that he is a pillar in the house of our God! What a stout pillar he would make, with his very decided opinions! How he has been blessed in having his wife and children all spared to him! Surely he should be glad to sing praises in the Lord's house every Sabbath, when he has such a talent for song! May I live to know he gladly does so. The morning was cloudy. Mrs. Maynard, working for a branch of the Salvation Army, came in to solicit funds. (T.S.R. 42. 2 P.M. 60. S.S. 54.)

Oct. 31. Tues. Delia Parker is now twelve years old, smart and capable. Our house is now being wired for electricity. Hannah is to have also an electric iron, which is a great convenience. Received letter from Theresa and wrote to Ada. James Thorp now is to be in partnership with the Movings in the dairy business. They have just brought to Jim's place 75 head of dairy stock, and now are milking 53 cows, with more soon to follow. So now they must have more hired men to cook for. This evening Laura had the girls of her S.S. class and the boys of Hannah class in a Halloween party at her house. (T.S.R. 40. 2 P.M. 61. S.S. 58.)

Nov. 10. Friday. The early morning was rainy but the abundant rain which the farmers were longing for did not materialize, and the sky has once more cleared itself of clouds. Mr. Garretson came in and Hannah and I registered as voters under the new Equal Suffrage amendment to our State Constitution. Not that I ever expect to exercise my right to vote. Received letters from Ada and Will Cooke. He is today 59 years old. Our chrysanthemums are very large and beautiful this year. Hannah has picked some wonderfully large ones, measuring 16 1/2 in. in circumference. Frost will keep many from perfecting. (T.S.R. 46. 2 P.M. 54. S.S. 47.)

Nov. 11. Satur. Now the north wind springs up tantalizingly to dry up what little moisture the scanty rain brought! Received letter from Eunice and wrote to the children in the East. (T.S.R. 28. 2 P.M. 47. S.S. 44.)

Nov. 13. Mond. Now again it is cloudy. Received letter from Theresa and wrote to Eureka. This evening there has been a Prohibition lecture in our Church by Prof. Savory of Claremont and we entertained him at our house. He is indeed a tutstaller straight, as he takes no liquors of any kind, neither tea nor coffee, and even abstains from eating meat, being a vegetarian. And he is as skinny and old looking as one might imagine His looks do not recommend his plan of diet. He is so fearful of being stimulated. (T.S.R. 37. 2 P.M. 54. S.S. 50.)