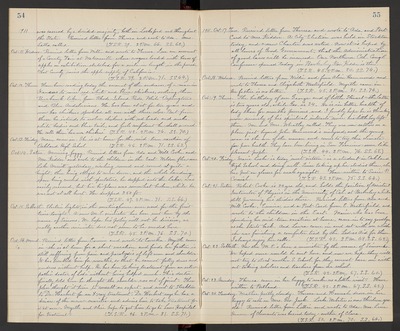 Oct. 11. Wednes. Received letter from Willie and wrote to Theresa. I see an account of a County Fair at Watsonville where wagons loaded with boxes of apples on exhibition stretched for a mile in length in the parade. That County raises the apple supply of California. (T.S.R. 39. 2 P.M. 71. S.S. 64.)

Oct. 12. Thurs. Have been reading today the account of the endeavor of a man in Kansas to raise red, white and blue chickens, evolving them Burbank-like, from Rhode Island Reds, White Ospingtons and Blue Andalusians. He has been at it for ten years and now has chickens speckled all over with these colors. But from them he intends to evolve chickens with red heads and necks, white bodies and blue tails, and feels confident he shall succeed. He calls them "banner Chickens". (T.S.R. 42. 2 P.M. 76. S.S. 70.)

Oct. 14. Satur. Morning foggy. Received letters from Ada and Will Cooke and Mrs. Kidder and wrote to the children in the East. Weldon flew over Lake Merritt yesterday, circling round and round at quite a height, then being obliged to come down, and the whole landing space being covered with spectators, he dropped into the Lake, was easily rescued, but his bi-plane was somewhat broken, while he was not at all hurt. He dropped 250 ft. (T.S.R. 47. 2 P.M. 71. S.S. 66.)

Oct. 15. Sabbath. Electric lights in the meeting house were used for the first time tonight. A new M.E. minister has been sent here by the name of Simons. We hope his policy will not be divisive, as really another minister does not seem to be needed here. (T.S.R. 45. 2 P.M. 76. S.S. 70.)

Oct. 16. Mond. Received letter from Eunice and wrote to Eureka. Myrtle came in - she is at home for a short vacation and finds her father is still suffering from pain and paralysis of left arm and shoulder. It has troubled him for months, so that he cannot fully dress and undress without help. He has been taking treatment from an osteopothic doctor of Lodi without being helped much. This doctor finally told him he thought the shoulder was out of joint. Then John thought it time to consult an expert, and went to Stockton to Dr. Harbert for an x-ray treatment. Dr. Harbert says he has a disease of the nerve - neuritis - and advises him to take treatment for it at once. Myrtle and Alice hope to get him to go to Lane Hospital for treatment. (T.S.R. 46. 2 P.M. 81. S.S. 71.)

1911. Oct. 17. Tues. Received letter from Theresa and wrote to Ada and Post-Card to Mrs. Kidder. A City Election was held in Stockton today, and a new Charter was voted. Now it is hoped by all lovers of Good Government, that the Administration of good laws will be insured. Our Northern Cal. Cong'l Conference opened today in Berkeley. Rev. Kidder is there. (T.S.R. 45. 2 P.M. 80. S.S. 74.)

Oct. 19. Thurs. The birthday of son George and of little Stewart - the latter is two years old, while Geo. is 34. He is in better health of body than for months previous, and I fondly hope he is thinking more seriously of his spiritual interests since his little boy left them. Mr. and Mrs. Wheatley called. They are new settlers on a place just beyond John Hammond's vineyard, and the young man is the son of the woman and comes to try this climate for poor health. They have been living in San Francisco - seem like pleasant people. (T.S.R. 44. 2 P.M. 76. S.S. 68.)

Oct. 21. Satur. Robert Cooke is 22yrs. old. and holds the position of Assistant Instructor of Physics in the University of Cal. at Berkeley while still pursuing his studies there. Received letter from Ada and Will Cooke, Eunice, and a Post-Card from E. Westerfield and wrote to the children in the East. Marie, who has been spending her mid-term vacation at home, came in to say goodbye. as she starts back. And Laura came in and sat with me which she was finishing a comforter tied by the Ladies Aid for them. I always enjoy her calls. (T.S.R. 43. 2 P.M. 68. S.S. 62.)