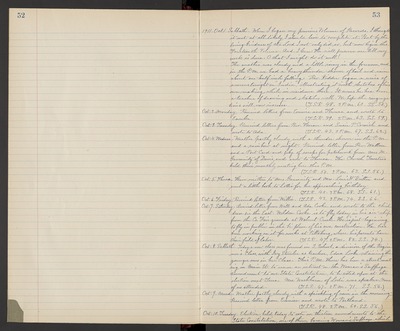 1911. Oct. 1. Sabbath. When I began my previous Volume of Records, I thought it not at all likely I should live to complete it. But by the loving-kindness of the Lord I not only did so, but now begin the Fourteenth Volume. And I know He will preserve me till my work is done. O that I might do it well! The weather was cloudy and a little rainy in the forenoon, and in the P.M. we had a heavy thunder-shower of hail and rain about one-half inch falling. Rev. Kidder began a series of sermons tonight on "India", illustrating it with sketches of his own making, while in residence there. It seems he has been a teacher of drawing and sketches well. We hope the congregations will now increase. (T.S.R. 48. 2 P.M. 60. S.S. 50.)

Oct. 4. Wednes. Weather partly cloudy with a thunder shower in the P.M. and a rainbow at night. Received letter from Rev. Wallace and a Post Card and pkg. of scraps for patchwork from Mrs. M. Gaumnitz of Davis, and wrote to Theresa. The Church Trustees held their monthly meeting here this P.M. (T.S.R. 50. 2 P.M. 63. S.S. 56.)

Oct. 7. Saturday. Received letter from Will and Ada Cooke and wrote to the children in the East. Weldon Cooke is to fly today in his air-ship from the Co. Fair grounds at Walnut Creek. He is just beginning to fly in public in the bi-plane of his own construction. He has been working on it for weeks at Pittsburg, where his parents have their field of labor. (T.S.R. 47. 2 P.M. 82. S.S. 74.)

Oct. 8. Sabbath. Today a new class was formed in S. School, a division of the Beginner's Class, with Ivy Stemler as teacher, Edna Locke retaining the younger ones in her Class. This P.M. there has been a street meeting on Main St. to arouse an interest on the Woman's Suffrage Amendment to our State Constitution, to be voted upon at the election next Tues. Mrs. Washburn of Lodi was speaker. None of us attended. (T.S.R. 47. 2 P.M. 71. S.S. 56.)

Oct. 10. Tuesday. Election held today to vote on thirteen amendments to the State Constitution, one of them favoring Woman's Suffrage, which