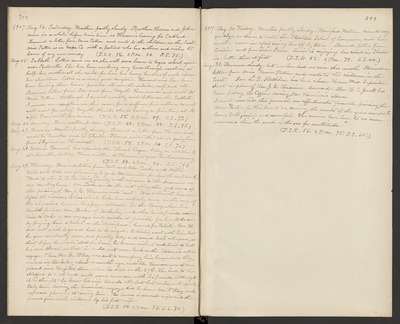 1907. Aug. 24. Saturday. Weather partly cloudy. Brothers Horace and John came in a while before train time, as Horace is leaving for Oakland. Received a letter from Miss Patton and wrote to the children in the East. Miss Patton is in Napa Co. with a patient who has asthma and wishes to learn of my remedy. (T.S.R. 56. 2 P.M. 84. S.S. 75.)

Aug. 25. Sabbath. Lottie came in as she will soon leave to begin school again near Porterville. She has been working very hard through vacation to help her mother all she could, for Lou has heavy burdens of work upon her shoulders. Lottie is a dear, good daughter. Howard and Lou have been having their house painted all over the outside, roof and all. Received letter from Ida and from Myrtle Hammond and wrote to Miss Patton. Although I do not usually write letters on the Sabbath. I made an exception in this case, for a sufferer from asthma cannot well wait for relief. Myrtle thinks she is having a fine time at Pacific Grove with her cousins. (T.S.R. 55. 2 P.M. 89. S.S. 77.)

Aug. 29. Thursday. Received letters from Will and Ada Cooke and Willie. Will and Ada are planning to go to Watsonville for health next week. Wrote to the C.C. Building Society with reference to the Insurance on our meetinghouse. Mr. Cooke sends the not altogether sad news of the passing of Rev. J.K. Harrison into rest. "It is well" with him now. After the arduous labors which broke him entirely down in the care of the churches, he now has peace eternal. In the Spring when his health failed, Mr. Barker of Berkeley and other kind friends advised him to take a sea voyage and made it possible for him to do so by buying him a ticket on the "Mariposa", bound for Tahiti. Mr. H. did not wish to go and had to be urged. A doctor went with him, but he grew constantly worse, and finally body and mind both collapsed, so that before he was to start for home, he became violent and tried to cut his own throat, so that he could not come back on the Steamer's returns voyage. Then Rev. Geo. DeKay was sent to accompany him home, and they arrived in Berkeley about a month ago, and Rev. Harrison was at once placed in a Hospital there, where he died on the 27th. He had to be strapped to a cot and could never converse with his friends, although it is thought he knew his wife towards the last but could not speak. Only twice during the homeward voyage did he know Mr. DeKay, and expressed pleasure at seeing him. He leaves a second wife and the four or five little children by his first wife. (T.S.R. 54. 2 P.M. 83. S.S. 70.)

1907. Aug. 30. Friday. Weather partly cloudy. Winifred Wallace came to say goodbye as she is to enter Stockton School of Commerce, and her mother came in after seeing her off by train. Received letters from Calvin and from Susie Pascoe. Susie is enjoying her school in Shasta Co. better than at first. (T.S.R. 52. 2 P.M. 78. S.S. 66.)

Aug. 31. Forenoon cloudy, but we have had no rain this month Received a letter from Miss Bessie Patton and wrote to the children in the East. Rev. L.D. Rathbone has been chosen Home Miss Superintendent in place of Rev. J.K. Harrison, deceased. Rev. H.E. Jewett has been filling the Office during Rev. Harrison's illness. I must now bid this Journal an affectionate farewell, praising the dear Father for His love to us, during the events of the years recorded here, both joyful and sorrowful. His mercies have been to us more numerous than "the sands of the sea for multitude." (T.S.R. 56. 2 P.M. 75. S.S. 65.)