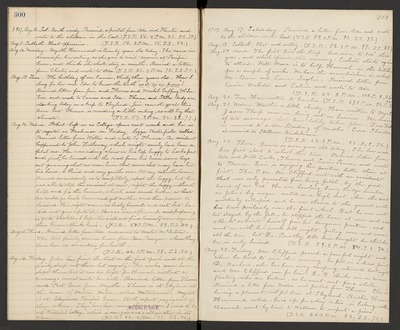 Aug. 12. Monday. Myrtle Hammond is twenty years old today. She came in dressed for her outing, as she goes to visit cousins at Pacific Grove, and thinks she shall stay a month. Received a letter from Chester and wrote to Ada. (T.S.R. 61. 2 P.M. 96. S.S. 80.)

Aug. 13. Tues. The birthday of our Eunice, thirty three years old. How I long for her and Edw. to know the truth "as it is in Jesus"! Received letters from Jim and Theresa and Mabel Geffroy McIntire and wrote to Eunice and Ida. Theresa and Stella Condy are starting today on a trip to Skyland. Jin cannot go at this time but Theresa is needing a little outing, so will try that climate. (T.S.R. 57. 2 P.M. 92. S.S. 77.)

Aug. 14. Wednes. Robert left us as College opens next week and he is to register as Freshman on Friday. Lizzie Westerfield called Received letter from Willie and wrote to Theresa. An accident happened to John Tretheway which might easily have been a fatal one. He was riding alone in his top buggy to Lockeford and just as he turned into the road from his home, some boys out gunning shot so near him that some shot may have hit his horse, a blind and very gentle one. At any rate, the horse turned so suddenly as to completely upset the buggy, but he was able to stop the animal at once, right the buggy without help, and fix the harness, which was much broken so that he could go back home and get another and then proceed to business. His right arm was badly bruised and cut, but he did not give up to it. He was here afterwards and proposing to go to Stockton. I hope he will not find himself more injured than he now thinks he is. (T.S.R. 58. 2 P.M. 93. S.S. 80.)

Aug. 16. Friday. John has fixed the tent on the front porch and all the family sleep out there but myself. For weeks some have slept there but it was too light for Hannah without a covering - now it snits her well. Received letter from Theresa and Post Card from Myrtle. Theresa is at Skyland at the home of Milton Miller, called Miltonmont. Myrtle is at Pacific Grove Both report enjoyment of their outing. There have been many changes since I used to be at "Hillside Cottage" which is now gone and a village store in its place. (T.S.R. 62. 2 P.M. 97. S.S. 81.)

Aug. 19. Monday. The first time the temp. has risen to 100- this year, and school opened this morning. Celeste starts again to attend. Will Moore is to help Hannah in the kitchen for a couple of weeks. We have the same teachers in school Mr. Bower and Louise Inglis. Received letters from Eunice Webster and Calvin and wrote to Ada. (T.S.R. 62. 2 P.M. 100. S.S. 85.)

Aug. 21. Wednes. Weather a little cloudy. Have written to Myrtle. James Thorp came in, being out on business. We learn of two marriages that have lately taken place. Dora [?] is married to a Mr. Berding of Needles. Cora Sherden is married to Stillman Winkelmann. (T.S.R. 62. 2 P.M. 88. S.S. 76.)

Aug. 22. Thurs. Bernice is seven years old today. She has made her first start to school this term. Received letters from Ada and Will Cooke, Theresa and Susie Pascoe, and wrote to Theresa. Susie is enjoying her position better than at first. This P.M. Mr. Clifford met with an accident that was only prevented from being fatal, by "the good hand of our God." He was hauling heavy bridge lumber in John's big wagon, seated on a high seat, when the seat suddenly collapsed and he was thrown to the ground with his head perilously near the front wheel. But he was not too dazed by the fall, he stopped the horses at once and was able to extricate himself from his dangerous position, and went on with his work till night, feeling worse and worse all the time, but Dr. Priestley tells him tonight he thinks he is only bruised. (T.S.R. 59. 2 P.M. 84. S.S. 74.)

Aug. 23. Friday. Mr. Clifford passed a painful night and when he tried to rise this morning, he fell in a dead faint Br. Barbour, who has been away, camping, returned last night and Mrs. Clifford ran for him. Dr. B. thinks one or more floating ribs are broken, so he must rest for a while. Received a letter from Willie and postal from Theresa She is having a pleasant, rest ful time at Skyland. Brother Horace Hammond called, he is up for a day or two - is looking well, Hannah went by train to Wallace to inspect a piano. (T.S.R. 60. 2 P.M. 83. S.S. 73.)