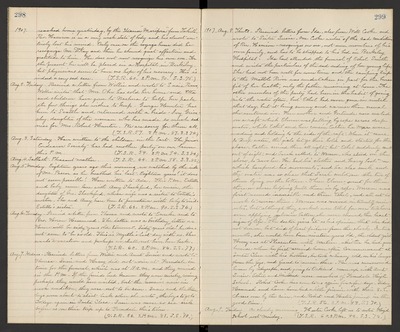 1907. reached home yesterday, by the Steamer "Mariposa" from Tahiti. Rev. Harrison is in a very weak state of body and has almost entirely lost his mind. Only once on the voyage home did he recognize Mr. DeKay and then he showed great affection and gratitude to him. He does not now recognize his own son. For the present he will be placed in a Hospital in Berkeley, but physicians seem to have no hope of his recovery. His is indeed a very sad case. (T.S.R. 60. 2 P.M. 90. S.S. 75.)

Aug. 2. Friday. Received a letter from Willie and wrote to Susie Pascoe Willie writes that Mrs. Ober has sold her home and Etta and children have gone to Nashua to help her pack the few things she wishes to keep. George Hunter has been to Seattle and returned with a bride - Ivy Grimsley, daughter of the woman who has made so much sadness for Mrs. Robert Hunter. We are sorry for them all. (T.S.R. 57. 2 P.M. 87. S.S. 74.)

Aug. 5. Monday. Eighteen years ago this morning, we watched by the side of Mr. Pascoe as he breathed his last. Eighteen years! it does not seem possible! Have written to Ada. This P.M. Estelle and baby came here with Amy Shackford, her cousin, the daughter of Geo. Shackford, whose wife was a sister to Estelle's mother. She and Amy have been to Jamestown with baby to visit Estelle's sister. (T.S.R. 62. 2 P.M. 90. S.S. 76.)

Aug. 6. Tuesday. Received a letter from Theresa and wrote to Eureka and to Bro. Horace Hammond. The latter was a birthday letter as Horace will be sixty years old tomorrow. Sixty years old! he does not seem to be so old. This is Myrtle's last day with us. She wants a vacation and perhaps we shall not have her back. (T.S.R. 60. 2 P.M. 84. S.S. 77.)

Aug. 7. Wednes. Received letters from Willie and Aunt Susie and wrote to Theresa. Susie and Harry did not arrive at Ferndale in time for the funeral, which was 11 A.M. and they arrived in the P.M. If the friends had known they were surely coming perhaps they would have waited, but the remains were in such condition, they were not to be seen. Susie and the three boys were about to start back when she wrote, the boys to go to College again in Santa Clara. Susie was never so sea sick before as on their trip up to Ferndale this time. (T.S.R. 56. 2 P.M. 81. S.S. 70.)

1907. Aug. 8. Thurs. Received letters from Ida, also from Will Cooke and wrote to Sister Susie. Mr. Cooke writes of the sad condition of Rev. Harrison - recognizes no one, not even members of his own family, and has to be strapped to his bed in Berkeley Hospital. Ida had attended the funeral of Ethel Smith and writes the particulars of the sad ending of her young life. She had not been well for some time and the camping trip to the Mattole River was undertaken in part for the benefit of her health, only the father remaining at home. The other members of the party had been in the habit of going into the water often, but Ethel had never gone in until that day, but it being sunny and warmer than usual she ventured in. Her mother and Gertrude were seated on a raft which Elmer was pulling by rope across deep water, while Ethel and her cousin Esther Le Mar were wading and holding to the side of the raft. When it came to deep water, the girls let go their hold and started for the shore. Esther arrived there all right, but Ethel suddenly sank out of sight, and Sarah called to Warren, who stood on the shore, to save her. He had his clothes and heavy boots which hampered his movements, and he also sank and the water was so clear that Sarah could see the two of them lying on the bottom. Then Elmer went for them those on shore helping pull them in by rope. Warren was first rescued insensible and then Ethel, and all set to work to revive them. Warren was revived in twenty minutes, but although they worked over Ethel for over two hours even applying galvanic battery, she never showed the least sign of life. The doctor gives it as his opinion that she did not drown, but died of heart failure from the shock. In two months, she would have been nineteen years old, the eldest girl Harry was at Pleasanton with Mertice, whether he had gone because when he first arrived home after Commencement at Santa Clara with his brothers, he took a heavy cold on his lungs from the fogs, and feared to remain there. He was summoned home by telegraph, and going to Oakland, came up with Aunt Susie. Ethel and Mildred were members of Ferndale High School. Robert Cooke has come to us again for a few days. Today Hannah and Laura have had a little picnic with their S.S. Classes over by the river, and Robert and Hester joined in the good time. (T.S.R. 56. 2 P.M. 83. S.S. 70.)