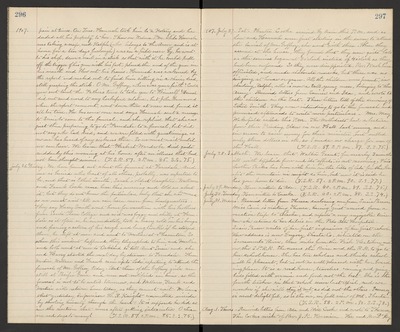 1907. pain at times. On Tues. Hannah took him to a Notary and he deeded all his property to her. Then on Wednes. P.M. while Hannah was taking a nap, and Ralph (who belongs to the Army and is at home for a ten days furlough) was in a field near by, he went to his shop, drove a nail in a stick so that with it he could pull off the trigger of his gun with his foot, placed the end of the gun in his mouth and blew out his brains. Hannah was wakened by the report and rushed out to find him sitting in a chair, dead, still grasping the stick. O Mr. Geffroy, where was your faith? Could you not trust the Father's time to take you to Himself? Hannah did not send word to any Lockeford relative, but John Hammond when the report came out, went down there at once and found it all too true. He has come over and says Hannah sent a message to Susie to come to the funeral, and she replied that she was just then preparing to go to Ferndale to a funeral, but did not say who had died, and we are filled with questionings, as no one has heard of any sickness there. So we must wait until we can hear. We learn that Herbert Wardrobe died quite suddenly this morning at his home after an illness that had not been thought serious. (T.S.R. 57. 2 P.M. 85. S.S. 75.)

July 26. Friday. We have found out about the funeral at Ferndale. And one is buried who least of all others, probably, was expected to be, and that is Ethel Smith, Sarah's oldest daughter. Wallace and Frank Locke came here this morning and told us about it, but they do not know the particulars, only that she was browned so we must wait till we can learn more from headquarters. They say Harry Smith went home for vacation with his brothers from Santa Clara College and as it was foggy and chilly at Ferndale as it often is, he immediately took a heavy cold on his lungs and fearing a return of his cough and lung trouble if he stayed there, he left at once and went to Mertice at Pleasanton. So when this accident happened, they telegraphed to him and Mertice and both went at once to Oakland to tell Aunt Susie and she and Harry started the next day by steamer to Ferndale. Then Mertice, Wallace and Frank came up to Lodi, expecting to attend the funeral of Mr. Geffroy today. But three of the Geffroy girls are still at Pacific Grove and were not notified in time, so the funeral is not to be until tomorrow, and Wallace, Frank and Mertice will return home today, as they cannot wait. We learn that yesterday Supervisor H.B. Knight committed suicide by shooting himself through the heart. It is supposed he did so in the reaction that comes after getting intoxicated O these are sad days to many! (T.S.R. 57. 2 P.M. 85. S.S. 75.)

1907. July 27. Sat. Hester Cooke arrived by train this P.M. and as Lou and Hannah were just starting in the survey to attend the burial of Mr. Geffroy, she went with them. When they arrived at the house, they found that they were quite late as the services began at 3 o'clock instead of 4 o'clock as they had been informed So they were disappointed. Rev. Washburn officiated, and made elaborated remarks, but there was no singing at house or grave. All the children were present, including Ralph, who is now a tall young man, belonging to the Army. Received letters from Eunice and Ida, and wrote to the children in the East. These letters tell of the drowning of Ethel Smith. They were intending to go to the funeral and promised afterward to write more particulars. Mrs. May Wakefield called this P.M. The Methodists had a lecture from their Presiding Elder in our Hall last evening and ice cream to raise money for their minister, but netted only three dollars in all, so I made no charge for use of the Hall. (T.S.R. 59. 2 P.M. 87. S.S. 75.)

July 28. Sabbath. We learn that Walter Grant, for nearly 3 months ill with typhoid fever and its effects, is not recovering. His brother Parker has been with him in the hills of late for the benefit the mountain air might do him, but now it is said he has gone home to die. (T.S.R. 57. 2 P.M. 90. S.S. 77.)

July 31. Wednes. Received a letter from Theresa enclosing one from Susie Pascoe. Miss Cain is visiting Theresa, having just arrived from a vacation trip to Alaska, and reports a very enjoyable time. Now she returns to her duties in the Palo Alto Hospital. Susie Pascoe writes of her first impressions of her first school. Her address is now Gregory, Shasta Co. situated on the Sacramento River, three miles from the Fish Hatchery and on the S.P.R.R. She crosses the River and the R.R. to go to her school house. She has ten scholars and thinks school will be pleasant, but it not so well pleased with her boarding place. It is a road house, travelers coming and going, beds filled with vermin and food not the best. She is the fourth teacher in that school since last April, and we wonder if she will stay it out, as did not the others. Scenery is most delightful, so is the air, in full view of Mt. Shasta. (T.S.R. 58. 2 P.M. 92. S.S. 78.)

Aug. 1. Thurs. Received letters from Ada and Will Cooke and wrote to Theresa. The Cookes write of Rev. J.K. Harrison. He and Rev. DeKay