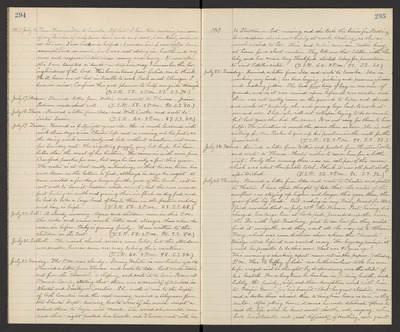 1907. July 16. Tues. Have written to Eureka. Of late I have been reading over some of my Diaries of early tomes here, and as I read, I am truly surprised at the way I was led and helped. I wonder how I ever could have accomplished so much, for I was not strong in health and my cares and responsibilities were many and heavy. If ever after this I am tempted to doubt or despair, may I remember the loving kindness of the Lord. "His love in times past forbids me to think He'll leave me at last in trouble to sink, Each sweet Ebenezer I have in review, Confirms His good pleasure to help me quite through." (T.S.R. 58. 2 P.M. 87. S.S. 76.)

July 19. Friday. Howard is fortyeight years old. He is much burdened with work these days since Chester left and is wearing out too fast, as the dairy work comes early and late without cessation, not even for Sunday rest. He is getting grizzly gray but keeps his hair better than the most of his brothers. He came in with some fine Crawford peaches for me, but says he has only a few this year. The water is at last really subsiding, so that he can turn his cows down on the bottom to feed, although he says he ought to have waited a few days longer for the good of the land, as it is not well to have it trodden while so wet, but the cows were so fast failing in milk and growing thin in flesh on dry feed, and he had to take a large load of hay to them in the pasture each day and hay is high. (T.S.R. 58. 2 P.M. 83. S.S. 68.)

July 22. Monday. The P.M. was cloudy. Irving Webster is now twelve yrs. old. Received a letter from Theresa and wrote to Ada. Last week Eddie cut from the "Chronicle" a clipping and sent it to Susie Pascoe at French Camp, stating that there was a scarcity of teachers in Shasta and Sisikyou Counties. She wrote at once to the Supts. of both Counties and the next evening received a telegram from the Shasta Supt. desiring her to wire if she would accept a school there to begin next Mond. She wired she would come and that night packed her trunk, and Theresa went with her

1907. to Stockton on Sat. morning and she took the train for Redding So we suppose she is now busily at work teaching, as she so much wished to be. Alice and Nellie came in, Nellie being at home for a short vacation. They tell me that Estelle, with the baby and her cousin, Amy Shackford, started today for Jamestown, to visit Estelle's sister. (T.S.R. 64. 2 P.M. 93. S.S. 80.)

July 23. Tuesday. Received a letter from Ida and wrote to Eureka. Ida is working very hard, has been haying, picking and preserving berries and making jellies. She had four tons of hay on one acre of ground, and as it was rained upon before it was made and there was not really room on the ground to turn and spread and make it properly, she and young boys had to work it over and over. I hope she will not collapse trying to do so much but last year she did the same. It is not easy for them to hire help. The situation is much the same there as here. She is not willing for Mr. Parker to give up his position in the mill for the farm work. (T.S.R. 58. 2 P.M. 90. S.S. 78.)

July 24. Wednes. Received a letter from Willie and postal from Hester Cooke and wrote to Theresa. Hester wishes to come here for a little visit. Early this evening there was an eclipse of the moon which was about three fourths total. I think it was all past shortly after 10 o'clock. (T.S.R. 56. 2 P.M. 90. S.S. 76.)

July 25. Thursday. Received a letter from Ada and wrote to Chester and postal to Hester. I have often thought of late that the water of the overflow was staying up higher and longer this year than the year of the "big flood." But reading in my Daily Record for 1862 I find recorded that on July 25th, the Steamer Pert, having discharged her cargo here at Lockeford, proceed up the river, the Dr. with Capt. Bradbury, just to see how far they could find it navigable, and they went all the way up to Athearn's Ferry, which was some distance above where the Clements Bridge stood before it was washed away. The boys say perhaps it would be possible to do this now. That was 45 years ago! This morning a shocking report came in the papers. Yesterday P.M. Thos. B. Geffroy of Lodi - our brother-in-law took his own life, crazed as it is thought, by despondency over the state of his health. For a long time he has been in failing health, and lately, the family, wife and three daughters, went with him to Pacific Grove, for his benefit. But he grew steadily worse and a doctor there advised them to bring him home as soon as they could. After getting home, it seems he made deliberate plans to end the life, which he knew must shortly end, anyway, as he had heart trouble and great difficulty of breathing and great