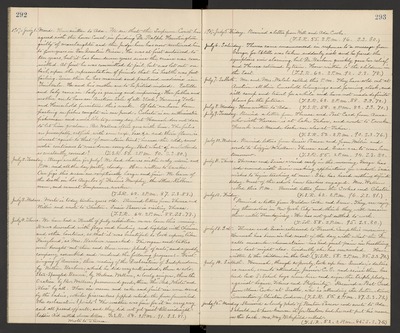 1907. July 1. Mond. Have written to Ada. We see that the Supreme Court has agreed with the Lower Court in finding Dr. Ralph Huntington guilty of manslaughter and the Judge here has now sentenced him to four years in San Quentin Prison. He was at first sentenced to ten years, but it has been seven years since the crime was committed. At first he was committed to jail, but was let out on bail, upon the representation of friends that his health was fast failing. Since then he has married and practiced medicine in Fruitvale. He and his mother are to be pitied indeed. Estelle and baby came in - baby is growing and improving. Her father and mother are to have an Auction Sale of all Stock, Farming Tools and Household furniture this week. Of late we have been feasting on fishes caught in our pond. Celeste is an enthusiastic fisherman and would like to go every day, but Hannah does not dare to let him go alone. Rev. Wallace often goes with him. The fishes are principally catfish, with some carp, boss, x.c. and their flavor is almost equal to that of mountain trout, because the cold, snow water continues to come down every day. But what of our lowlands so constantly covered? (T.S.R. 53. 2 P.M. 90. S.S. 80.)

July 2. Tuesday. Strange weather for July! We had showers in the early morn and P.M. and all the day partly cloudy. Have written to Eureka. Our figs this season are exceptionally large and fine. We learn of the death in Los Angeles of Francis Murphy, the Blue Ribbon man, and earnest Temperance worker. (T.S.R. 62. 2 P.M. 87. S.S. 83.)

July 4. Thurs. We have had a Fourth of July celebration on our lawn this evening. It was decorated with flags and bunting and lighted with Chinese and other lanterns, so that it was beautiful to look upon, "like Fairyland," as Mrs. Barbour remarked. The organ and tables were brought out there and there were plenty of seats, and goodly company assembled and rendered the following program: - First, singing of "America," then reading of the Declaration of Independence by Nathan Barbour, which he did very well indeed, then a solo, "Star-Spangled Banner", by Helena Wallace, a lovely singer, then the Oration by Rev. Wallace, pronounced good, then the "Red, White and Blue" by all. Then ice cream and cake and fruit ice were served by the ladies, while firecrackers popped outside the fence furnished the exclamation! points! The weather was fine for it in every way and all passed off well, and they did not get quiet till midnight. Ladies Aid netted eleven dollars. (T.S.R. 54. 2 P.M. 91. S.S. 81.) Wrote to Theresa.

July 6. Saturday. Theresa came unannounced in response to a message from George, for Estelle was taken suddenly sick and he feared the symptoms were alarming, but Dr. Barbour quickly gave her relief and Theresa returned by train. Have written to the children in the East. (T.S.R. 62. 2 P.M. 92. S.S. 78.)

July 7. Sabbath. Mr. and Mrs. Walsh called this P.M. They have sold out at Auction all their household belongings and farming stock, and will camp and travel for a while and have not made definite plans for the future. (T.S.R. 62. 2 P.M. 88. S.S. 72.)

July 11. Thurs. Theresa and Susie arrived early in the morning. George has rode around with Susie making applications for a school. Susie wishes to begin teaching at once. She has heard nothing definite today. Most of the schools have teachers engaged. Mrs. Wallace called this P.M. Received letters from the Cookes and Chester. (T.S.R. 62. 2 P.M. 96. S.S. 81.)

July 12. Friday. Received a letter from Weldon Cooke and Irene. They are enjoying themselves in New York City and think they will remain there until Thanksgiving. He has not yet settled to work. (T.S.R. 58. 2 P.M. 95. S.S. 80.)

July 13. Sat. Theresa and Susie returned to French Camp this morning. Hannah has been in bed most of the day with what the Dr. calls muscular rheumatism - has had great pain in breathing and last night also. Evidently she has overworked. Have written to the children in the East. (T.S.R. 58. 2 P.M. 85. S.S. 70.)

July 14. Sabbath. Hannah, though so poorly, took up her Sunday's duties as usual, events attending Junior C.E. and since then has had her S. School boys come here and sign the triple pledge against Liquor, Tobacco and Profanity. Received a Post Card from Alma Cooke at Seattle, who is attending the International Convention of Christian Endeavor. (T.S.R. 55. 2 P.M. 87. S.S. 73.)